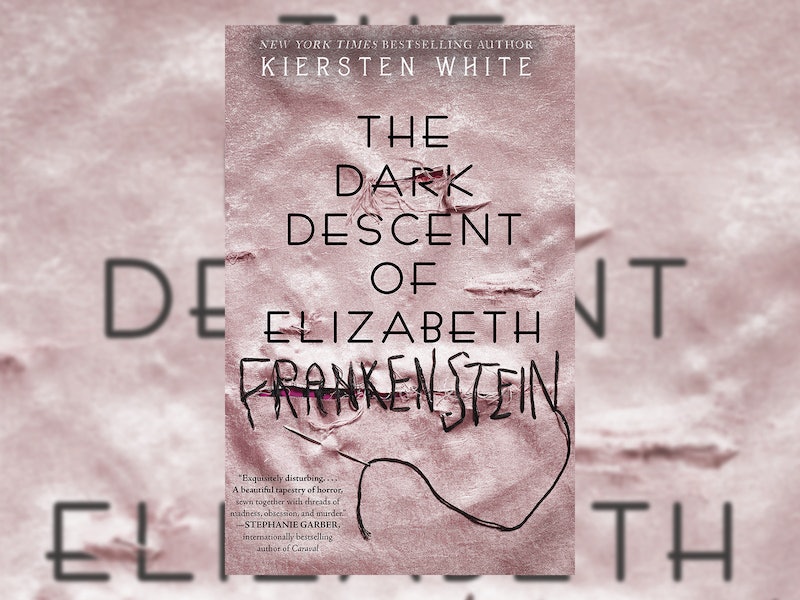 It's undeniable that Mary Shelley's macabre horror story, Frankenstein, is one of the most enduring classics in literature. Readers everywhere just can't seem to get enough of the tale of Victor Frankenstein and his monster. But have you ever wondered more about Elizabeth Frankenstein's backstory? For those unaware, Elizabeth is an orphan girl who was taken in by the Frankenstein family and brought up by Victor's side — later becoming his wife before tragedy strikes the couple on their honeymoon. Well, author Kiersten White certainly has given some thought to the tragic Elizabeth, if her new book The Dark Descent of Elizabeth Frankenstein is any indication. Bustle has an exclusive excerpt of the book below, so you can start reading right now.

Due to hit shelves on Sept. 25, the book opens with Elizabeth Lavenza on the verge of being thrown into the streets. She hasn't had a proper meal in weeks and her thin arms are covered with bruises from her "caregiver" and she doesn't know where she'll end up. That is, until she is brought to the home of Victor Frankenstein, an unsmiling, solitary boy who has everything — except a friend. Victor is her escape from misery. Elizabeth does everything she can to make herself indispensable — and it works. She is taken in by the Frankenstein family and rewarded with a warm bed, delicious food, and dresses of the finest silk. Soon she and Victor are inseparable.

But her new life comes at a price. As the years pass, Elizabeth's survival depends on managing Victor's dangerous temper and entertaining his every whim, no matter how depraved. Behind her blue eyes and sweet smile lies the calculating heart of a girl determined to stay alive no matter the cost... as the world she knows is consumed by darkness. If that high-stakes description hasn't already hooked you, the excerpt below certainly will.

Those fleeting childhood years, when Henry guided our play and Victor was satisfied with his school studies, were suffused with light and the closest I had ever felt to ease. There was something remarkable in having Victor and Henry — the one so prone to fits of anger and cold aloofness, the other so bright and joyful and open to the wonders of the world without questioning how they existed — revolve around me.

I saw in the hungry way Henry sought Victor’s attention and favor that Victor’s love was rare, and rare things are always the most valuable. In turn, I became even more what Victor wanted me to be. Lovely. Sweet. Brilliant and quick-minded but never as smart as him. I laughed at Henry’s jokes and plays, but I saved my best smiles for Victor, knowing he collected them and secreted them away.

I saw in the hungry way Henry sought Victor’s attention and favor that Victor’s love was rare, and rare things are always the most valuable. In turn, I became even more what Victor wanted me to be. Lovely. Sweet. Brilliant and quick-minded but never as smart as him. I laughed at Henry’s jokes and plays, but I saved my best smiles for Victor, knowing he collected them and secreted them away."

I had become this girl in order to survive, but the longer I lived in her body, the easier it was to simply be her. I was twelve, on the cusp of leaving childhood behind forever. But we still played like children. I was Guinevere to their Arthur and Lancelot, acting out the dramas Henry lovingly cobbled together out of pieces he stole from great playwrights of eras past. The trees were our Camelot. All our foes were imaginary and therefore easily defeated.

One day we were playing a variation of kings and queens. I lay in a magical sleep upon my forest bed. Henry and Victor, after much travail, had found me. “She is the most beautiful girl in the world! A sleep like death has claimed her. Only love can awaken her again!” Henry declared, raising his sword to the sky. Then he leaned over and kissed me.

I opened my eyes to find Henry looking at me in shock, as though he could not believe what he had done. I dared not look at Victor. I squeezed my eyes shut again, not reacting to Henry’s kiss.

“I thought perhaps it would — I thought it would wake her,” Henry said, stumbling over the words. He sounded frightened.

“She is not sleeping.” Victor’s voice was as brittle as morning-frosted grass. “Here, see? No life in her veins.” He lifted my wrist, which I kept limp. “She is dead. But we can trace the pathways her heartbeat would have used in life.” Victor drew a finger along the blue veins in my pale arm, up and up to where my sleeve started. My arm twitched at the contact.

“Be still!” Victor whispered, catching my open eye. “Here, I have my own blade, sharper and subtler than your sword. We will see if she bleeds now that she is dead.”

“Victor!” There was no laughter in Henry’s voice. My wrist was tugged away, and I was pulled out of my corpse character and into Henry’s arms.

“You cannot do that!” he said.

“Just a small cut, to see what is under the skin. Do you not wonder?” Victor’s anger this time was not a storm raging out of control. It was darker and deeper, like the bottom of the lake — cold and unknowable. It was a new type of anger, and I did not know how to soothe it.

“Elizabeth does not mind.” Victor’s knife winked in the sun as though it wanted to play, too. “She is always concerned with the beauty and poetry of the world, but I want to know what lies beneath every surface. Give me your hand, Elizabeth.”

Henry, on the verge of tears, tugged me farther away. “You cannot go around cutting people open, Victor. It is simply not done!”

I did not know where to look or how to respond. But I knew staying with Henry — on his side — would offer me no benefit in the long run. And I could not risk Victor’s anger. I had never been the target of it! Henry had put me there, and I resented him for it.

I did not know where to look or how to respond. But I knew staying with Henry — on his side — would offer me no benefit in the long run. And I could not risk Victor’s anger. I had never been the target of it! Henry had put me there, and I resented him for it."

I extricated myself from Henry’s arms and placed a dainty kiss on Victor’s cheek. Then I put my arm through his and held his elbow as I had seen Madame Frankenstein hold Judge Frankenstein’s. “He was only playing. You are the one who ruined the pretend by kissing me without asking first.”

Victor radiated coldness, but his surface was as smooth and clear as glass. “I am done with your games for today, Henry. They are boring.”

Henry looked from one of us to the other, hurt and bewilderment on his kind face as he tried to understand how he had been the one in the wrong.

“Henry does not understand how to play corpse; that is all,” I said. “It is our special game. We are getting too old for it, anyhow.” I looked to Victor for confirmation — desperate for it. I needed to mend this. I could not lose Henry. He was such a bright spot in my life.

Victor nodded, one eyebrow raised dispassionately. “I suppose we are.”

Excerpted from THE DARK DESCENT OF ELIZABETH FRANKENSTEIN, published by Delacorte Press, on sale Sept. 25 2018.