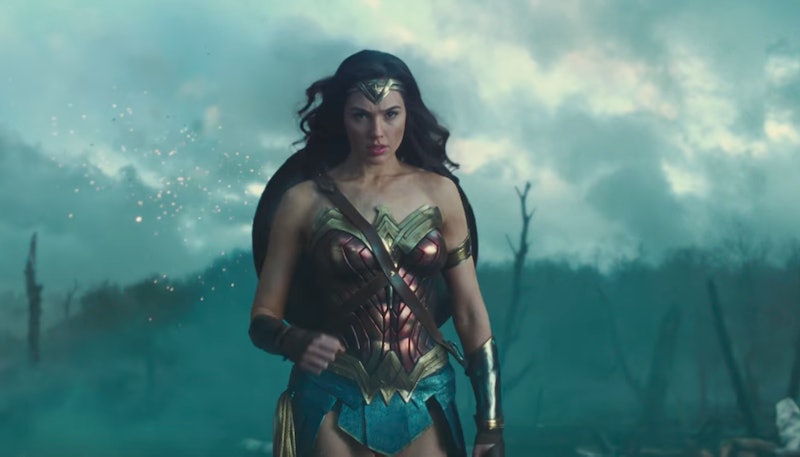 Nowadays, it's pretty much impossible to make any kind of franchise movie without adding in Easter Eggs. And, as the last film in the DCEU (DC Extended Universe) before Justice League, Wonder Woman has a lot of pressure to contain connections to its bigger on-screen world. However, not all the DC Easter Eggs in Wonder Woman are focused on setting up the next installment to the DCEU. In fact, most of the Wonder Woman Easter Eggs are used to pay tribute to the many past iterations of the superhero.

Compared to other superhero movies, this one is relatively Easter Egg-free. Batman, who makes two memorable appearances in last summer's Suicide Squad, doesn't even appear in Wonder Woman, but that said, he's not completely absent from the story. Spoilers ahead! Bruce Wayne plays a tiny role in Wonder Woman, as the movie kicks off with Diana, in modern-day Paris, receiving a package from Wayne Enterprises — the WWI photo of her and Steve Trevor. The gift comes with a note (though we do not get a Ben Affleck voice over), and reaffirms Bruce and Diana's friendship, likely to play a key role in Justice League.

Then there's The God Killer — the sword Wonder Woman wields. In the comics, the sword is actually most commonly associated with Deathstroke as his weapon of choice. Given to Deathstorke by Hephaestus (an Olympian God), it can harness magic energy and has a consciousness that can help guide its owner in battle. These supernatural aspects to the sword are not really present in Wonder Woman, but the mythology suggests it could come back in future films.

In a smaller Easter Egg, Diana eats ice cream for the first time during a charming scene. The sequence was previously seen in the DC animated movie Justice League: War, but, according to Movie Pilot, it actually originates from a 2012 graphic novel, Justice League: Origin. Then there's the DC reference of Wonder Woman blocking bullets with her wrists; the scene of her using her cuffs to deflect a bullet and save Steve from certain death mirrors a classic scene from Christopher Reeve's Superman, but this time switches up the gender dynamic.

And we can't forget about Lynda Carter and the original Wonder Woman series. "There are little moments in the film where we got to do really subtle homages," Jenkins said in an interview with Sci-Fi Now, via Geeks of Color. However, new fans will be hard-pressed to identify these little Easter Eggs, as Jenkins herself admitted they are "very subtle." Perhaps the revolving door Diana goes through after changing into her civilian clothing in London is a wink to the classic spin Wonder Woman used to change in and out of her superhero costume on the original series. And while Carter, the original on screen Wonder Woman, does not appear in the film, she does get a Special Thank You in the credits.

Compared to most DC films, this is a pretty small amount of Easter Eggs, which, to me, is concerning. While the film should certainly be celebrated for giving a female superhero her own time to shine, free from Superman and Batman, the fact that it has so few connections to the DC world makes it feel, to me, like it's a movie that studio executives were willing to push aside. The least amount of ties Wonder Woman has to the DCEU and the upcoming Justice League, the easier it is for the movie to be erased from the DCEU cannon should it not do well at the box office.

Granted, no studio execs have explicitly stated this strategy, and the small number of Easter Eggs might not be as intentional as I'm assuming it is. But if it is purposeful, for the reasoning I've stated, it wouldn't be the first time it's happened. Fans will recognize this tactic from Deadpool, a movie that was given very little opportunity to connect to the current X-Men universe seen in X-Men: Days of Future Past, likely because it was seen as a risk by the studio. If the film had flopped, then it would have been easy to separate it from the canon overall.

The relatively small number of Easter Eggs may be a bit disappointing, but it is a nice change of pace to see a superhero movie not bogged down by forced connections to other heroes or obscure comic book stories.