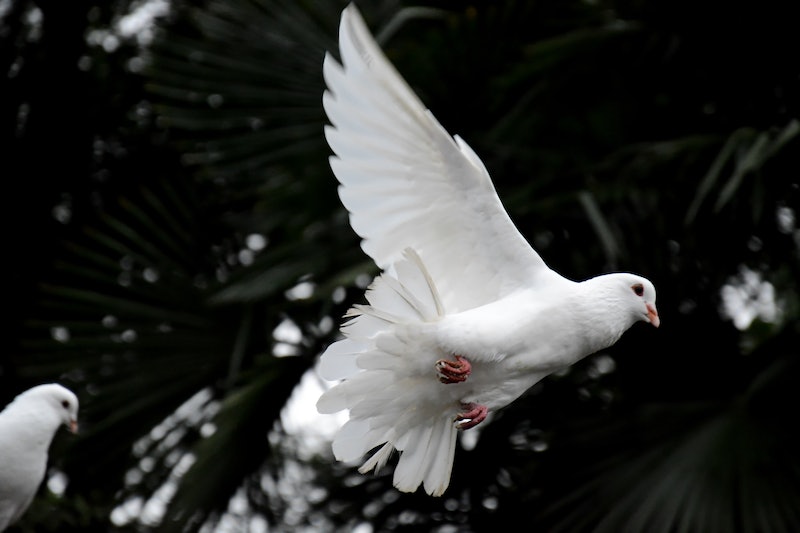 Dramatizations of famous events certainly reserve a right to take a certain amount of artistic liberty. Some amping up of drama is something one could expect from Ryan Murphy, one of the kings of television theatrics, as he debuts American Crime Story: The Assassination Of Gianni Versace (writer: Maureen Orth). This strange detail in the series premiere, however, rings true to reality. The dead dove lying near Gianni Versace's body after his death in 1997 was really there, according to several reports.

The Washington Post reported that a dove really was brought down by the same gunfire that killed the legendary fashion designer. The paper added that authorities investigating the murder actually took the dove initially as a clue that Versace had been killed by the mafia, as a dead birds were perceived to be a signature of organized crime. Slate, however, reports that the real-life dove found next to the body was a mourning dove, not a white dove, as shown in the show, meaning that Murphy and his crew still may have pulled a few creative strings to make a bit more of a statement in this fateful scene.

That small detail of the killing's aftermath isn't the only one that is reportedly true — American Crime Story (associate producer: Linda Favila) also shows an onslaught of media, tourists and fans who gathered outside Versace's mansion following the murder. The same Washington Post article reported that people really were were trying to approach the scene to gather samples of Versace's blood and take photos of his body, likely to sell as grisly souvenirs. The scene outside the home, it seems, escalated quickly. "Shortly after the shooting, which occurred about 9 a.m. on busy Ocean Drive, the beachside park across the street from Versace’s palatial residence was jammed with the panoply of beach denizens — artists, models, weightlifters and beach bums — who arrived on skates, bicycles and scooters,” reads a 1997 Washington Post article published shortly after the shooting.

The book on which American Crime Story is based this season also outlines the aftermath of the ways onlookers were readily prepared to exploit the designer's death. "Within minutes of the shooting, the first media trucks rolled up to the Versace mansion," reads Vanity Fair correspondent Maureen Orth's book, according to the first Washington Post piece linked above. “The first profiteer had already raced home for his Polaroid camera upon seeing Versace’s body laid out on the Casa Casuarina steps, and was only able to make it back in time to get a shot of the designer’s bare feet sticking out of the ambulance."

However, the premiere of American Crime Story is prefaced by a disclaimer informing viewers that not everything the show portrays is solid fact. "This series is inspired by true events and investigative reports," the message reads. "Some events are combined or imagined for dramatic and interpretive purposes. Dialogue is imagined to be consistent with these events."

Murphy himself has come forward about the show's relationship to accuracy, as well, per Deadline. "When you’re doing a show like this you’re not doing a documentary, you’re doing a docu-drama," he said at a TCA Q&A session, according to the outlet. "There are certain things you take liberty with.”

These "liberties" the show takes makes it all the more interesting to find out what is really true — details like the crowd surrounding the mansion or the slain dove may have been concocted to symbolize Versace's icon status and the tragedy of his killing, but they weren't. They're specks of reality, giving viewers a chilling glimpse at what it would have been like to truly be at the scene of the crime.