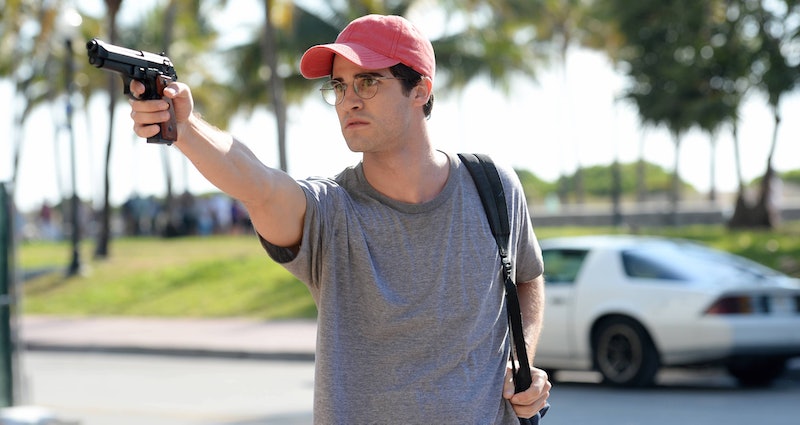 Although American Crime Story is telling another true crime story for its second season, The Assassination Of Gianni Versace (director: Gwyneth Horder-Payton) will take some liberties with history just like The People v. O.J. Simpson (executive producer: Nina Jacobson) did. The new season, premiering on Jan. 17, will attempt to explain why Andrew Cunanan killed Gianni Versace in Miami Beach on July 15, 1997.

The Assassination Of Gianni Versace (associate producer: Linda Favila) is based on the book, Vulgar Favors: Andrew Cunanan, Gianni Versace, and the Largest Failed Manhunt in U.S. History by Vanity Fair journalist Maureen Orth. Vulgar Favors is touted as non-fiction and is based on a significant amount of reporting. In Orth's original 1997 Vanity Fair article about Cunanan, she reported that he had been on a murder spree, and that it ended with the renowned fashion designer. Since Cunanan took his own life after killing Versace, the world will never really know his true motive. But that hasn't stopped people from trying to understand Versace's murder in the nearly 20 years since his death.

Here are some of the leading theories — some that are controversial and some that will be incorporated into American Crime Story — on why Cunanan killed Versace.

He Had Met Versace Before

As will be shown in American Crime Story, Orth reported in her 1997 Vanity Fair article that Versace and Cunanan (played in ACS by Edgar Ramirez and Darren Criss) met in 1990 in San Francisco. TIME also reported, "FBI agents told TIME that Cunanan and Versace probably did meet in San Francisco, though the nature of their relationship, if any, is still a mystery." However, Versace's partner at the time of his murder, Antonio d'Amico (portrayed in ACS by Ricky Martin), insists this is not true. "They never knew each other," d'Amico told The Guardian in 2017. "So much has been fictionalized." Even if Cunanan had met Versace, it still doesn't explain why he killed him. But it would make the murder make slightly more sense rather than Cunanan just killing a random celebrity.

He Was A Sexual Sadist

Gregg McCrary, a former supervisory agent of the FBI's Behavioral Sciences Unit told Orth that he believes Cunanan was a "sexual sadist." Although Cunanan and Versace didn't have a sexual relationship, understanding his psychology can help to provide a motive for his murders. McCrary said a sexual sadist murders "when he realizes that in spite of his best efforts he is not getting what he wants. ... Homicide is an attempt to regain control over the situation."

McCrary also said, "By the time they reach their late 20s and early 30s, they’ve developed their sadistic fantasies. They're really vibrant at this point, and they need to act out these things, and they can’t find people to go along with them. So now they find an unwilling victim to abduct, rape, or murder." (Cunanan was 27 when he murdered Versace.) If Cunanan's murder of Versace still doesn't make sense to you, well, it probably never will. As Tom Cronin, also of the FBI Behavioral Sciences Unit, told Orth, "The trigger can be anything — to him at the moment it’s rational,” says Cronin.

A theory that has been debunked but is still discussed is that Cunanan was HIV-positive and went on a killing spree as some sort of revenge. E! reported that the autopsy of Cunanan's body showed that he was not HIV positive, according to Miami Herald. But TIME reported that Mike Dudley, a San Diego AIDS counselor, told the outlet that Cunanan asked him several questions about AIDS and said, "If I find out who did this to me, I'm gonna get them!" Yet again, Versace and Cunanan did not have a sexual relationship, but if Cunanan thought he was HIV-positive, he might have been acting out.

He Was Targeting Gay Men

In a 2018 article from TIME about the Versace murder, the outlet reported, "Federal investigators believed Cunanan may have been targeting gay men." Cunanan was gay and three out of his five victims, Jeffrey Trail, David Madson (an ex of Cunanan's), and Versace, were more or less living openly gay. His third victim, Lee Miglin, was married to a woman for 38 years, and while there were rumors that Cunanan knew Miglin or his son Duke, Duke maintained to an ABC Chicago affiliate in 2017 that the family did not know Cunanan. And while Orth reported there was no sexual molestation, Lee's murder was particularly brutal — he was bound. Cunanan's fourth victim before Versace — a heterosexual, married man, William Reese — is said to have been killed so Cunanan could take his vehicle. So this theory has some holes in it as well.

While there's not much evidence to back this up, TIME reported, "A friend of Cunanan's has told FBI agents that Cunanan had a crush on someone in Versace's entourage, perhaps a boyfriend. They suspect jealousy might have set off his next violent explosion." As Versace was in a relationship with D'Amico and D'Amico said that neither he nor Versace knew Cunanan, this theory doesn't seem as legitimate as others.

Perhaps the most popular theory is that killed Versace out of jealousy not because of whom he was dating but because of his fame. "The world would know two things after the murder of Gianni Versace," former FBI criminal profiler Candice DeLong told ABC News. "One, they would know who Versace was. And two, they would know his killer was Andrew Cunanan. That's what Andrew wanted. 'Look at me. I can get to anyone.'" Cunanan was known to want a glamorous lifestyle and often told lies to make his life seem more impressive, as American Crime Story will accurately show. Still, was that enough of a reason to target Versace?

Despite these theories, the FBI wrote in a 2014 article, "For reasons that remain unclear, Cunanan had begun a murderous spree in late April 1997." Versace just happened to be the most famous victim of that murderous spree and even with American Crime Story trying to make sense of it all, Cunanan's motive will continue to be a mystery.