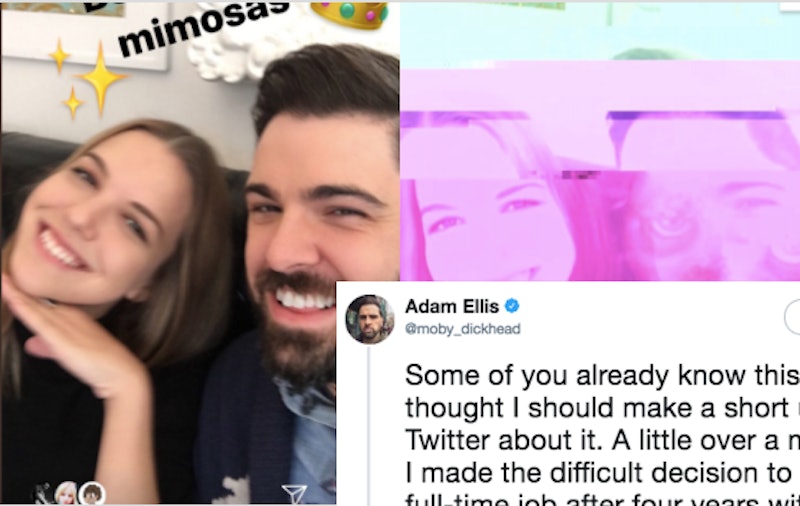 Well, bad news for anyone who’s been hoping for a new Dear David update soon: Last night, we got what basically amounts to a fake-out. Adam Ellis posted the first Twitter thread that isn’t related to Dear David he’s written since… actually, almost since the whole thing began way back in August. To be clear, I don’t think the ghost story is over yet; also, Ellis can do whatever the heck he wants to with his social media accounts, whether that involves breaking the fourth wall or not. But since his Twitter feed has been pretty much entirely Dear David-themed since roughly August of 2017, most of his followers had the same kind of reaction. That reaction is: “Cool story, bro, but what about the ghost haunting your apartment?”

Ellis’ thread, which he began tweeting at around 8:30 p.m. ET on Tuesday night, was actually a reiteration of a personal/work-related announcement he first made on Instagram in the middle of January: He's decided to leave his full-time position and strike out on his own. “Some of you already know this, but I thought I should make a short update on Twitter about it,” he wrote. “A little over a month ago I made the difficult decision to leave my full-time job after four years with the company.” His plan moving forward, he said, is to “turn [his] attention toward personal projects.” He finished, “I’m nervous about what the future holds, but I feel good. I know big things are coming.”

His earlier Instagram post, which also featured a four-panel comic he had drawn about the situation, held a slightly more detailed message specifying that he was leaving BuzzFeed in particular. “It wasn’t an easy choice to make,” Ellis wrote, “but it became difficult to juggle my side projects with my daily work life, and so I’m taking the plunge and going solo.” He thanked his followers for supporting his work over the years and included a link to his Patreon campaign. (Art is work, too, but it's often far too difficult to get paid for your work when you're an artist.)

And, y’know, it all kind of makes sense. Like many creatives, Ellis has a lot of balls in the air; besides his work for BuzzFeed, he's also regularly posted his comics to Instagram, he’s hosted a podcast, he has a Tee Public store featuring his work, he’s published a couple of books (2013’s Books Of Adam: The Blunder Years and 2015’s Tiny Hats On Cats), and he’s got another book on the way (Super Chill: A Year Of Living Anxiously is set to be published this year). As a fellow creative who also made the decision to go freelance fairly recently so I had time to work on some projects of my own, I totally understand making this type of decision.

None of that, however, is stopping everyone replying to Ellis’ Twitter thread with messages of congratulations… and also queries about whatthe heck is going on with the vengeful child ghost who may or may not be possessing him right now. (Remember? That's what the last couple of updates have implied — that David has taken possession of Ellis' body.) Or at least, the fictional version of him. Because we’re all in agreement that Dear David is a piece of fiction at this point, right? I mean, it’s spectacularly told fiction — but it’s fiction nonetheless. What’s more, the last time Ellis used Twitter to talk to people outside of the story he’s spun was this tweeted dated Sept. 5, 2017, so breaking the fourth wall now has thrown many followers for a loop.

The responses, though? They’re gold. And despite the fact that they all fall under the general umbrella of, “OK, but what about this whole ghost story thing?”, they also sort of divide out into a couple of separate camps.

Many Just Want To Know What Happens Next

This kind of response is by far the most common...

...Although some are more polite about it than others.

We're just so invested in it now.

I mean, yeah, it was a little jarring to suddenly have a non-Dear David thread come out of Ellis' Twitter feed when it's been literally all David, all the time for about five months... but this is also true:

Some Are Curious About David's Sudden Absence

To be fair, keeping a fictional ghost child you've created as a viral stunt out of a legit announcement about your work makes sense...

We need to talk about David.

A Few Made This A-Plus Joke

This is my favorite response, hands-down. Well played.

Also a good take on it.

That, too. Well done, everyone! You win the internet today.

Some Were... A Little Abrasive

I mean, that may be the case, but that's... perhaps not the kindest response.

Consider this your reminder that content creators aren't their audiences' puppets.

Even if the disappointment is real.

Some Folks Apologized For The Less-Than-Kind Reactions

A Few Think That The Real Story Is Just Beginning

Some, However, Aren't Convinced We're Out Of The Woods Yet

It's maybe a tad suspicious, is it not?

Maybe it's something... more.

DAVID, YOU GET OUT OF THERE RIGHT NOW, YOU HEAR ME?

And, Of Course, There's Also This

Personally? I think we're looking at an instance of Ellis breaking the fourth wall — and I also think it's an indication that the Dear David story is rapidly about to draw to a close. I've been wondering for some time how Ellis is going to deal with his Twitter feed after the whole thing is over, especially if the story ends with David taking Ellis over: Will he come clean about it being fiction the way Manuel Bartual did after running his own short fiction experiment not too long after Dear David began? Will he continue to post as David-posing-as-Ellis? Or will he just switch back to using Twitter like he did prior to the story without addressing it at all? Only time will tell — but whatever else happens, I think there's still just a bit more to come before the Dear David story is really and truly over.

In the meantime, it's probably worth pointing out that, whether or not Dear David is actually related to any of Ellis' upcoming work, the story did raise his visibility quite a bit: In July of 2017 — about a month before the Dear David story first hit the internet — Ellis had about 72,000 Twitter followers, according to the Wayback Machine. As of Feb. 7, 2018, he has nearly a million:

That alone is worth a round of applause, I think!