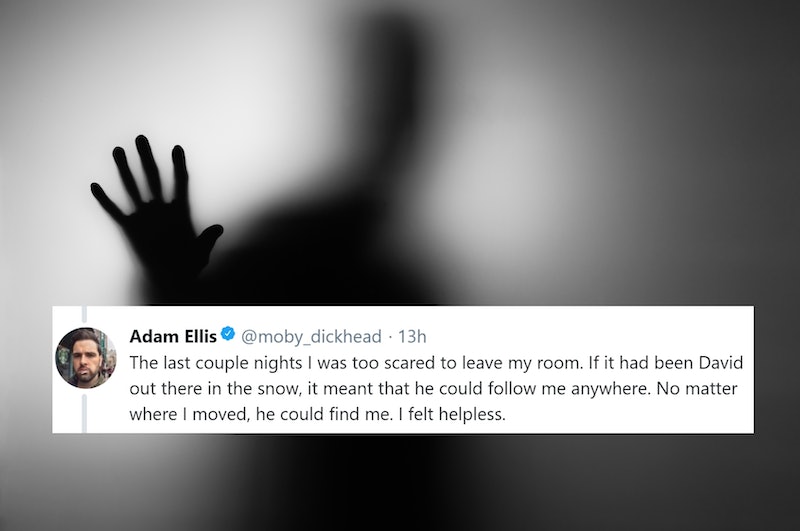 It’s been about three weeks since we last had a major update from Adam Ellis of “Dear David” fame and two since we heard from him at all — so it's about time that he granted us another installment of the story, right? Happily, he's obliged — and thanks to the Jan. 2, 2018 update, we've now learned that Dear David followed Ellis home to Montana when he headed out of town for the holidays. The internet, naturally, is freaking the heck out, because, uh, that’s not concerning at all, is it?

You’ll recall that in Ellis’ Dec. 12, 2017 thread, he revealed those horrifying pictures of David watching him sleep; then, on Dec. 20, he let us know that he was heading to Montana to visit family for the holidays, so he’d likely be incommunicado for a while. He’s back in New York now, though… and the holidays weren’t as happy as he was hoping they’d be.

In his Jan. 2 update — which he began tweeting at 10:18 p.m. — Ellis noted that when he first left town, he actually started to feel better than he had been “almost immediately.” He wrote that he felt “less tired, less foggy” — a development he found encouraging. “Up until now," he said, "I haven’t really entertained the thought of moving, thinking that David would probably just follow me wherever I go. But when I left for Montana, everything seemed to improve. Like maybe David wouldn’t follow me after all. Maybe he was tied to the house, not me.” Ellis even started doing some preliminary apartment hunting, now that moving felt like it might actually be a viable option.

It didn’t last, though. After a couple of days, Ellis said he “started to feel strange again” — and one night, when he got up to go to the bathroom, he felt like “there was something moving outside the bathroom window.”

It turned out to be a hoofed animal of some sort; he found the tracks outside in the morning:

But the same thing happened again the next night — with two major differences: First, when Ellis peeked out the window to see if he could spot whatever it was out there, he did indeed see “something lurch off to the right and disappear from view”; and second, the tracks he found in the snow this time weren’t animal tracks.

They were human tracks.

I don't really get a terrific sense of scale from this picture, so I’ll have to take Ellis at his word that they’re “really small.” Just, y'know, for whatever that's worth.

Anyway, he wrote that he followed the footsteps around the yard, only to find that they “disappeared into the ditch out back.” The whole experience left him with a horrifying revelation:

It’s not the house or the apartment that's haunted.

The footsteps are proof of that fact.

Ellis returned to New York the day after Christmas — but things haven’t gotten any better. He wrote that he could “still feel [David] at night. Watching me from different corners of my room. Always getting closer”; however, Ellis also said that he always wakes up “right before something happens.”

What’s more, David appears to have gotten craftier. Although Ellis noted that he’s been using that app he downloaded during the last update again — the one that automatically takes a photo every minute or so — it hasn’t captured anything of note. You’ll recall that a number of the photos it snapped in early December seemed to imply that David knew he was being recorded; I can’t help but wonder if he’s subsequently figured out how to avoid the camera. It’s curious, is it not?

In any event, the evening of Jan. 1 was apparently “particularly bad,” according to Ellis. He dreamed that David was lurking in the corner of his room — but not on the ground; he was near the ceiling. His mouth was moving “faster than it should be,” although Ellis couldn’t make out what he was saying. As has typically been the case with these kinds of dreams, Ellis said he was paralyzed — and then this happened:

He grabbed his phone and looked at the camera roll. Most of the images showed nothing — but the very last one, which he said had been taken just moments before, showed this:

You know what’s coming next, right? Yep: I brightened the photo. Here’s what it looks like:

What Ellis thought was a dream about David falling from the ceiling and landing on top of him appears not to have been a dream at all. It may have actually happened — just as a previous update suggested was possible.

For what it’s worth, one Twitter user did point out that this latest photo may or may not reveal that “David” is held up by a string:

He has looked rather doll-like in his previous appearances; if that is a string in the photo, then it would appear to confirm that fact.

However, since y’all already know that I firmly believe the whole Dear David saga to be an exercise in unconventional storytelling — that is, that it’s fictional — as well as the numerous reasons why I believe this to be the case, let’s take another angle this time round. Instead, let’s accept the idea that this is a story and work within its fictional setting for a moment. The method of storytelling, after all, is what’s the most interesting about the whole thing.

Within the world that the previous updates have created, we know that David is real; that he can appear both in real life and in dreams; and that he can be photographed. If we return the idea established in the Dec. 12 update — that David knew he was being photographed — and that his absence in most of the photos Ellis has taken since then might be because David has figured out how to avoid the camera, then it might be reasonably assumed that David has reasons for allowing this one image to have been caught this time around. What, exactly, those reasons might be remains to be seen — but whatever it is, it can’t be good.

So: What, conceivably, could Ellis do now? Moving doesn’t seem like it will solve the issue, but neither does simply staying put; what’s more, as he noted elsewhere in the thread, he’s already “tried everything I can think of. I’ve saged my apartment, I’ve hired a medium, nothing has worked.” As such, “What now?” does not appear to be a question that actually has an answer.

Which, of course, makes me wonder exactly how this whole thing is going to end. The way it’s been going, I feel like David is on the path to victory here — which might mean that Ellis’ days are numbered.

Now would probably be a good time to reiterate that if I'm wrong, and the whole thing isn't a fictional story, and Ellis does meet with a terrible fate... I'm sorry. I'm so sorry. Perhaps it's an excellent day for an exorcism, after all.

In the meantime, we're left where we always are after these updates: On tenterhooks, waiting to see how the rest of the tale unfolds. Follow along at Ellis' Storify, or via his Twitter page. There's clearly still more to come.