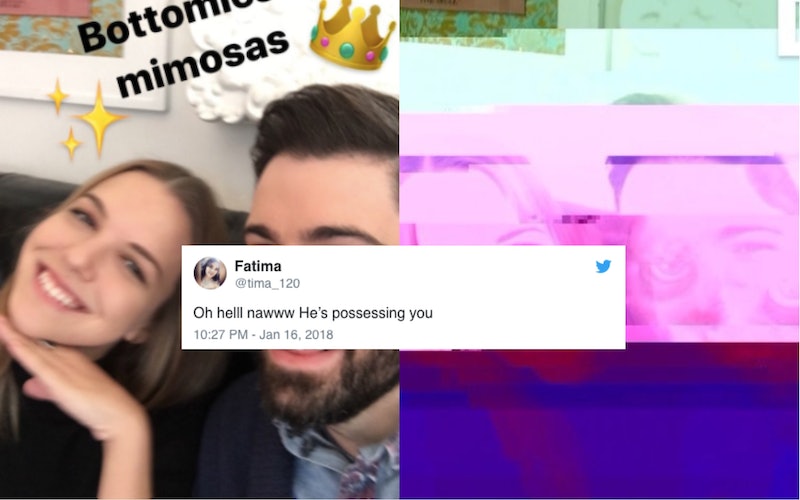 Well, everyone’s favorite murderous child ghost is back — and this time, he’s not just on Twitter anymore. According to the latest update, Dear David appeared in Adam Ellis’ Instagram Stories over the weekend… and now people are worried that Ellis might actually be possessed. Ellis began tweeting this update late on Tuesday night (Jan. 16, 2018, for those keeping track) — and although he had originally thought that David might finally have backed off, it turns out the story is far from over.

It’s been about two weeks since the last update, during which we learned that a) David had followed Ellis home to Montana for the holidays, and b) that David had seemingly attacked Ellis while he was asleep by dive-bombing onto him from the ceiling. Interestingly, though, Ellis began his latest update by observing that things had been relatively quiet since then. “After what happened a couple weeks ago,” he wrote, “everything stopped.” He hadn’t had anymore dreams. He wasn’t waking up in the middle of the night anymore. He was, he said, “actually… feeling great.”

At the same time, though, something was — and is — still clearly not right. As he put it, “Basically, as good as things have been for the past couple weeks, I can’t shake the feeling that something is off.”

He’s losing time, for one thing:

Which is, uh, not a good sign. What’s more, he also wrote that he’ll “mishear someone and ask them to repeat what they said, but they'll say they didn't say anything.”

Yeah... nope. That is not good. Definitely not good. Not good at all.

Despite those troubling developments, though, Ellis said that he was convinced it was finally all over; indeed, he actually opened up Twitter on Sunday intending to tweet something to that effect. When he booted up the app, though, he realized he had many more notifications than usual — and when he went to check out why that might be, he found person after person asking him what the heck was going on with his latest Instagram Story.

The Story has vanished by now, of course — such is the nature of Instagram Stories — but he does have some screenshots he was able to take of it before it disappeared into the digital ether. It wasn’t a complicated Story; it just featured a couple of photos from a brunch he had gone to with a friend on Saturday:

He also posted one additional photo at the conclusion of the brunch. But, uh… something apparently happened to that photo between then and now. “The next day,” wrote Ellis, “I had a zillion messages about the third photo I posted. People had taken screenshots and sent them to me.”

This is one of those screenshots:

Ellis swears up, down, left, and right that the photo looked normal when he posted it — but either way, the implications are… troubling:

OK. So. Let’s assume that we’re dealing with a fictional story again, because… well, it is almost 100 percent certain that we’re dealing with a fictional story here. That means that the most interesting way to analyze this latest update isn’t by trying to debunk it, but rather by trying to work out what’s going on within the reality the story has created. And if we do that, the glitched photo implies that David is more strongly tied to Ellis than ever.

I can think of a few possible reasons the photo may have looked fine to Ellis when he posted it : One, it’s possible that it was fine — and then David wormed his way into it and distorted it once it was live; or two, it’s possible that it wasn’t fine, but David manipulated Ellis such that he saw the photo as fine. Either way, though, what the photo itself might mean is that David has actually possessed Ellis — or, if he hasn't done it already, that he's going to possess him very, very soon.

In fact, that was most of Ellis’ followers’ initial response to this update:

Because, I mean… look at the glitched photo again.

There is definitely a second face laid over Ellis’… and it looks like David’s. It looks, in fact, like the part of David’s face we saw through Ellis’ apartment door’s peephole way back in October:

Additionally, the photo may indicate that we’re not actually dealing with a ghost; rather, David might be a demon, which is something else entirely. Indeed, all of the other symptoms Ellis said he’s experiencing — hearing things, losing time, etc. — are frequently cited as signs that someone has been possessed by a demon, according to people who, y’know, believe it’s possible for people to get possessed by demons. Those times Ellis has heard something when no one has actually spoken? Texas Ghost and Spirit Intervention notes that people who are possessed “may hear voices when no one is present,” while the Paranormal Society states, “The demonically possessed victim may report unexplained auditory experiences where they hear voices seemingly coming from within or from the external environment from no identified source.” And as for the lost time? Warns Mystic Files, “Pay very close attention to the person if they have frequent blackouts in their memories or start to lose great spans of time in their day”; apparently these blank periods characterize “the times when the entity took over the physical form of the normal human.”

Furthermore, this piece about the stages of demonic possession published on Exemplore in 2016 suggests that Ellis is truly in the danger zone now. According to the Exemplore piece, demonic possession has three stages. The first, “Manifestation and Infestation,” is described as, “a form of haunting with the express idea of the demon introducing itself to the intended target through surreptitious means.” The demon is “seeking … approval to stay” at this point — basically, it needs its target to let it in. I would argue that a good deal of the “Dear David” story has taken place during this stage; the "surreptitious means" seem to have been primarily dreams. I think this stage ended during the second installment of the hatch update, when Ellis ended up taking two objects connected with David — a green marble and a small leather shoe — into his home.

Stage two, meanwhile, is “Oppression” — or, “where the entity makes its true nature known and moves into full attack mode.” During this stage, targets may experience “sleep deprivation, increased paranormal activity, bites, scratches,” and other such occurrences. Ellis has primarily experienced the first two — sleep deprivation and increased paranormal activity — although he did end up with a bruise he couldn’t explain on his arm earlier in the story.

And as for stage three? It’s not good. It’s “Full Possession.” At this point, “the evil entity will be in control more often than not”; “manipulation is at an all time high”; and “the demon may even have control of the host body like a parasite.”

I am… concerned that this is where we’re at right now. And I suspect this stage may have begun the moment David plummeted from the ceiling onto Ellis while he was sleeping during the Jan. 2 update.

I mean, the good news is that, again, the whole thing is almost certain to be fiction. But it’s pretty freaky all the same, and, well… I’m kind of wondering if this Twitter user is onto something in terms of what might happen next:

In any event, though, it looks like we should all start paying attention to Ellis’ Instagram account for more aspects of the story as it unfolds. And, as always, stay tuned to his Twitter account and Storify page —because apparently there’s still a lot more to come.

More like this
This Creepy TikTok Trend Encourages Out-Of-Body Experiences
By Kaitlyn Wylde
What Is The Forest Personality Test? The TikTok Trend, Explained
By Georgina Lawton
13 Selfie Instagram Caption Ideas That Exude Main Character Energy
By Jessica Booth and Emma Carey
TikTok Is In Its Elle Woods Era
By Meguire Hennes
Get Even More From Bustle — Sign Up For The Newsletter