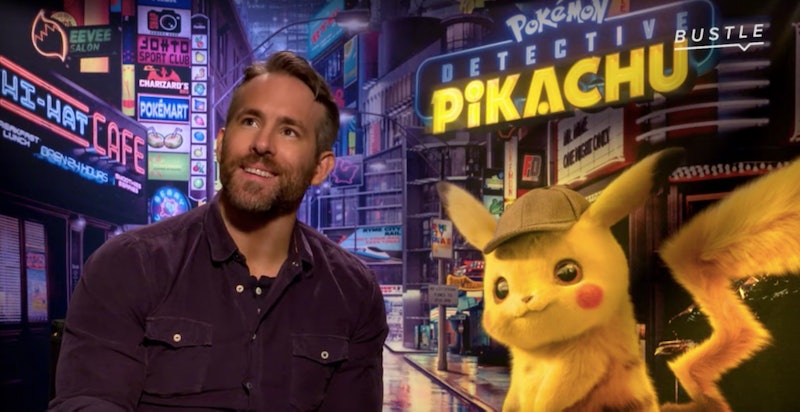 When Pokémon Detective Pikachu hits theaters on May 10, you'll get to live (for a little under two hours) in a a world where Pokémon not only exist, but coexist with humans. And you'll definitely want to hold onto your Pokédex, because this live-action/CGI adaptation of the Detective Pikachu video game is packed with all kinds of different ones — from the most common Magikarp to the legendarily rare Mewtwo, plus a big mystery at the heart of it all. To mark this auspicious occasion, we challenged the cast — Ryan Reynolds as the voice of everyone's favorite fictional yellow critter, Justice Smith as his human partner Tim Goodman, and Kathryn Newton as Psyduck-whisperer/budding investigative journalist Lucy Stevens — to a Pokémon-themed game of Would You Rather?

The action begins in the movie when Tim's ace detective father Harry dies in an accident. In Ryme City to settle his dad's affairs, Tim finds the adorable Detective Pikachu (Reynolds), who he discovers that only he can clearly understand and communicate with. As it turns out, Pikachu is also trying to solve a mystery of his own, which happens to be entangled with whatever really happened to Harry. Tim and Pikachu decide to partner up, and embark on a journey through the utopian city to get to the bottom of this case.

The whole Pokémon universe is work of ingenious fiction, but let's suspend our disbelief for at least three minutes. What if we did live in Ryme City? What if Pokémon actually existed? With that mindset, Bustle wanted to find out how the cast would handle a few Pokémon-related situations each of the cast members would rather find themselves in. Watch Reynolds, Smith, and Newton take on the game below, with some hilarious explanations and on-point logic.

When asked if they would rather sit next to a nervous Psyduck on a rollercoaster, or be chased by a horde of angry Aipom, the cast all comes down on one side. Confident in her character's relationship with the yellow-feathered, big-billed, seemingly stoic Pokémon, Newton reasons, "He and I get along, I could totally calm him down." Pokémon expert Smith weighs the options, saying, "You can try and calm down the Psyduck. The Aipom, they get rowdy. They get aggressive. You never know."

Ever resourceful, Reynolds has a particular technique in mind to pacify the panicking Psyduck. "My strategy is just to soothe Psyduck with the dulcet sounds of Enya." And, no, he doesn't mean a bluetooth speaker blasting the Irish singer-songwriter's tunes. "The 'Orinoco Flow' would be coming right out of this," he says, pointing to his mouth.

Overall, there's just a lot of love in the cast for these powerful, eclectic creatures, and nostalgic audiences are sure to feel the same. So keep these questions in mind when you catch Detective Pikachu in theaters and ask yourself what you'd do.