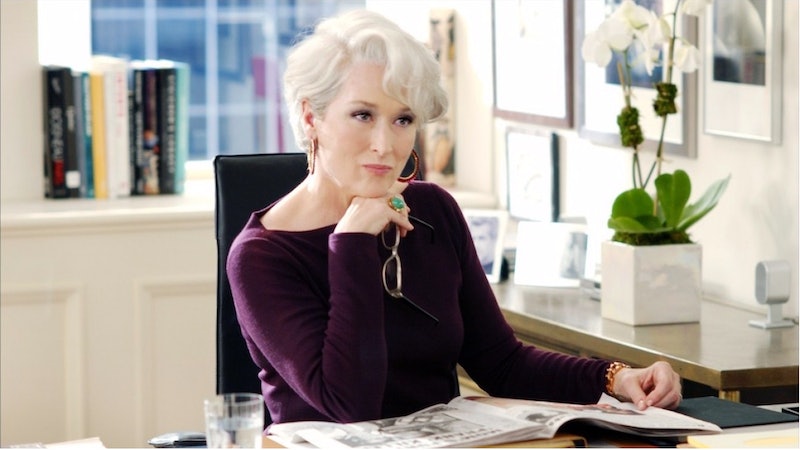 If you haven't watched The Devil Wears Prada in a while, now would be a great time to revisit the early 2000s classic. The Devil Wears Prada musical will finally debut next year, as reported by the Chicago Tribune, but it might be hard for a lot of fans to attend. The highly anticipated theater adaptation of the beloved 2006 film will premiere in Chicago on July 14, 2020, and run through at least Aug. 16. The production is then expected to head to Broadway sometime during the 2020-21 season.

The Devil Wears Prada musical has been in the making for a long time. Famed Broadway producer Kevin McCollum announced that he was developing a stage musical based off the movie back in January 2015, as part of a movie-musical partnership with 20th Century Fox. And in January 2017, it was announced that the one and only Elton John would be composing the music for the new production.

"Re-imagining The Devil Wears Prada for the musical theatre is super exciting," the singer said in a statement at the time. "I’m a huge fan of both the book and the feature film and a huge aficionado of the fashion world. I can’t wait to sink my musical teeth into this hunk of popular culture."

The musical will also feature lyrics by Shaina Taub and a book by Paul Rudnick. And even though The Devil Wears Prada is obviously Broadway-worthy fare, the musical will premiere in Chicago for a special reason. The production will be directed by Anna D. Shapiro, the artistic director of Chicago’s Steppenwolf Theatre Company. “It was important to Anna that we premiere in Chicago,” McCollum told the Chicago Tribune. And although a New York production is certainly in the cards, the producer declined to specify a specific date for when the show would move to Broadway.

The 2006 film Devil Wears Prada starred Meryl Streep as Runway editor-in-chief Miranda Priestly, Anne Hathaway as new assistant Andy Sachs, and Emily Blunt as miserable expert assistant Emily Charlton in what would become career-defining roles for all three actors. The movie was based off Lauren Weisberger’s bestselling 2003 novel of the same name, in which she recounted her experience working as the assistant to Vogue's famous editor-in-chief Anna Wintour, the inspiration for the icy cold, yet charmingly hilarious character of Miranda.

The film went on to be nominated for two Academy Awards, including a nod in the Best Actress category for Streep's performance, and a costume design nomination for Patricia Field. And with such a significant history behind the film, expectations for the musical are sure to be higher than the heels Andy struggles to walk in.

Casting for the musical has yet to be announced, but fans shouldn't expect to see Streep, Hathaway, or Blunt on stage. According to the Tribune, an industry workshop was held in New York featuring Broadway actors Emily Skinner and Krystina Alabado in the roles of Priestley and Sachs, respectively, signaling that producers are potentially looking at more well-known theater actors to fill their shoes.

Tickets for the Chicago run of the musical have not gone on sale yet, meaning fans have plenty of time to plan a trip, or wait until it hits Broadway to witness Miranda Priestly singing in the flesh.