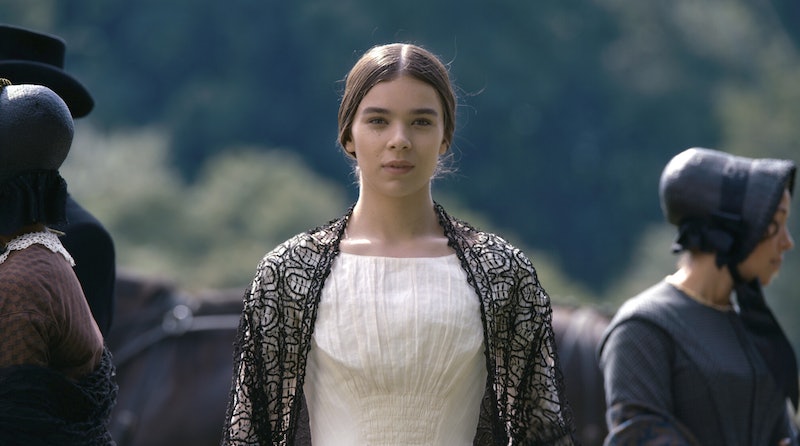 The preview for forthcoming Apple TV+ series Dickinson that was released on Thursday Sept. 19 has ghost horses, Emily Dickinson saying "Dude!", and a fresh tune from the show's star, so yes, it is a must-watch. The Dickinson trailer features Hailee Steinfeld’s new song “Afterlife," a single that was created for the the show based on Emily Dickinson's life. Set in the 19th century, Dickinson is a comedy that, according to Apple's description, "explores the constraints of society, gender and family from the perspective of a rebellious young poet who was ahead of her time." The series, which stars Steinfeld as Emily Dickinson, will be available when Apple TV+ launches on Nov. 1.

When Dickinson premiered at the Tribeca TV Festival on Sept. 14, Steinfeld shared that she had a new song coming down the pike that would be linked to the Apple TV+ series. According to Variety, she said, "This is a song I’m incredibly proud of, and I feel like after embodying this character, I have a more fearless approach to my writing."

"Afterlife" is has a twinkling and gauzy pop sound, but it is not a lighthearted bubblegum bop. As the title suggests, the lyrics are fixated on death and mortality. There are lyrics like “Immortality is bliss,” “Remind me I’m alive,” and “Now that I’m gone, you’re gonna miss me," and the chorus asks the listener what will happen once they shuffle off of this mortal coil:

Will you love me when my heartbeat stops?

When my heartbeat stops, will you stay mine? (Mine)

Will you promise me you'll search for us?

Will you find me after life? (Life)

Oh, for better or for worse

Will death be our last kiss, my love? (Love)

Will you promise me you'll search for us?

Will you find me after life? (Life)

The single is available on Apple Music now.

The real-life Dickinson wrote a lot of poems about death, and it is no coincidence that the song Steinfeld, Stargate, Kennedi Lyken, and KOZ cowrote for the scripted show based on the 19th century poet really digs into mortality. According to Rolling Stone, Steinfeld said in a press release, "There’s a line in the song that says ‘immortality is bliss’ and it's reminiscent of a lot of Emily’s poems."

“I wanted Death to be the coolest guy in the world because Emily is in love with Death. Part of the story of the season is about her coming to a more realistic and mature understanding of Death, but where she begins is a kind of Goth worship of death. I just really wanted it to be someone that you would genuinely get excited to see.”

Dickinson features Wiz Khalifa as the personification of Death, feminist themes, and Steinfeld portraying a literary icon. This show may be as thrilling of as a ride in a carriage that is being pulled by a fleet of ghost horses.