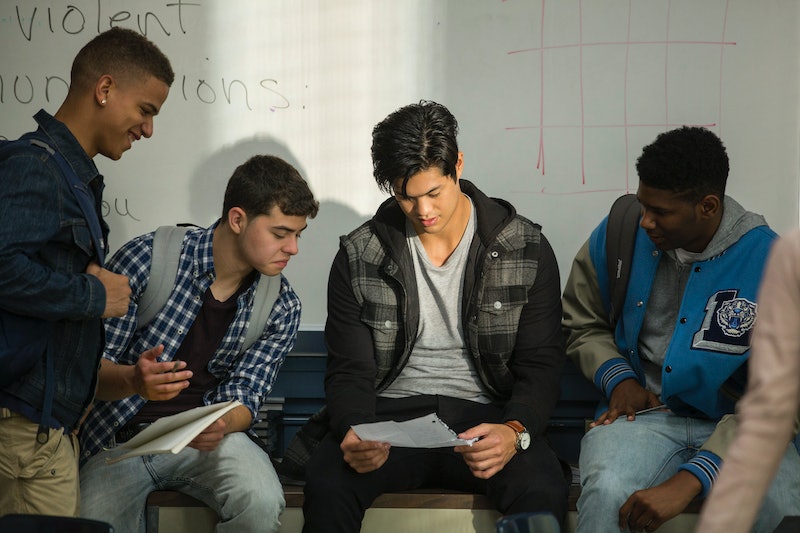 Netflix's adaptation of 13 Reasons Why, which hit the streaming service on March 31, deals with many important, difficult topics like sexual assault, suicide, and bullying. The way it realistically confronts these issues head-on sets it apart, but that's not the only way the series stands out. The diverse cast of 13 Reasons Why defy the stereotypes typically found in high school-set TV shows. It's so refreshing to see a fictional school that doesn't subscribe to tired tropes for characters' ethnicities, making the Netflix series a huge step forward when it comes to increasing representation on TV. Spoilers for Netflix's 13 Reasons Why ahead.

13 Reasons Why is based on the best-selling 2007 novel by Jay Asher, which includes very few physical descriptions of the characters, leaving much to the reader's imagination. The TV series, however, puts many different faces to the book's names as it takes us through the story of teen Hannah Baker, who posthumously explains her reasons for suicide on a set of cassette tapes.

On the Netflix series, popular cheerleaders Jessica and Sheri are played by black actors Alisha Boe and Ajiona Alexus, respectively. Steven Silver, another black actor, plays the Ivy League-bound, honor council president, Marcus. Asian actor Michele Selene Ang plays Courtney Crimson, a high-achieving student who is coming to terms with her own sexual orientation. Shall I go on?

13 Reasons Why's two leads, Dylan Minnette (Clay) and Katherine Langford (Hannah) are white, but the other cast members also get a significant amount of screen time, in which they absolutely shine. The Netflix series actually expands the stories of all of these characters a great deal compared to the book, giving them much meatier storylines.

But it's not just the casting of these diverse actors that should be recognized. Their portrayal of fully realized characters in the series also marks a huge step forward for not falling prey to the tired stereotypes so often seen on TV.

On 13 Reasons Why, there are no Asian nerds, or sassy black friends. Jessica is one of the most popular students at Liberty High School and, throughout the 13 episodes, is involved in two different interracial relationships. Courtney worries about what her own sexual orientation could mean for her two fathers. Tony struggles to make time for his boyfriend as guides Clay through listening to Hannah's tapes.

In one of my favorite scenes, Zach sits at the dinner table as his mother, who is also Asian, grills him about why he isn't the captain of the basketball team — not about studying more or getting into an Ivy League college. The actor who plays Zach told Salon he was glad to break these stereotypes. "Usually Asian roles are reserved for martial artists or the tech nerds," Butler said. "At the beginning of my career I saw that, and that’s when I told my team, 'I can’t go out for these roles, I’m just not built for them. I’m 6’3 and athletic. I can’t play a nerd or a Bruce Lee type of character.'"

Hopefully, more series will follow 13 Reasons Why's lead in creating a variety of roles that go to actors from a variety of backgrounds. More TV series, whether or not they're set in high school, should strive to have as many complex, diverse characters as the halls of Liberty High.