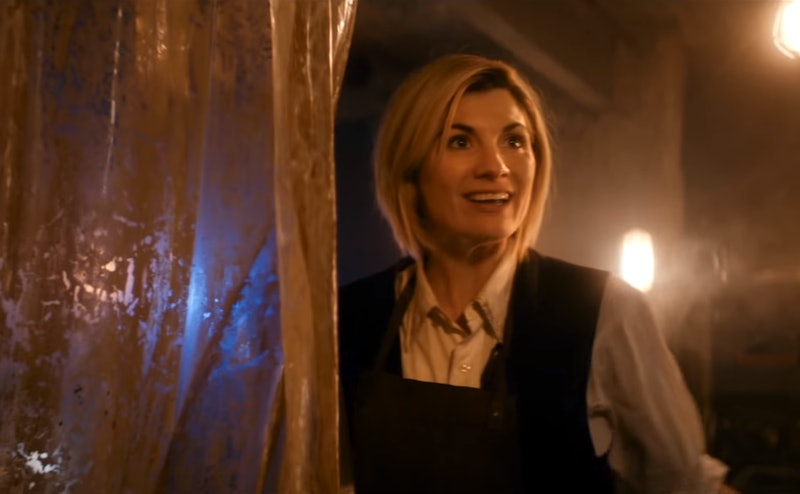 Break out your sonic screwdrivers, because the Doctor Who Season 11 trailer has arrived — and it's a proper one this time. Jodie Whittaker's 13th Doctor made her world debut at the San Diego Comic-Con in an a trailer that puts the focus firmly on the new. No Daleks? No Cybermen? No problem. Everything is getting an upgrade this season, including the sonic screwdriver, making this an exciting time to be a fan of Doctor Who.

More importantly, the series is doubling down on its promise to be a more inclusive space. Not only is the Doctor a woman for the first time in the show's 50-plus-year history, the show is also making history behind the scenes. As reported by Den of Geek, Season 11 showrunner Chris Chibnall revealed that the new series will feature scripts from people of color for the first time ever. According to the outlet, Chibnall said,

It should be the most inclusive show on television. The whole concept of Doctor Who is anyone can go anywhere and do anything, and we want to reflect that both on screen and off.

That's a sentiment that fans can agree with. Although the names of the Season 11 guest writers have yet to be made public, Chibnall revealed that there will be three men and two women penning scripts. Additionally, the show will have two female directors and two male directors helming episodes. And the editing team for the new season is predominately female as well. As Whittaker's Doctor and her three companions head out on new adventures, they'll be guided by a group of diverse men and women behind the camera. By the looks of the first trailer, this could lead to a fresher series over all — not to mention one that's unafraid of embracing change.

Chibnall doubled down on the message that now is the perfect time to introduce viewers to the show during a bit of the panel shared via BBC America. He explained,

It's a lot of new stuff this year. I mean we've got 10 stand-alone stories. We've got lots of new villains. There's lots of new monsters, lots of new characters for you to fall in love with. And I think my big message to you guys out here is you've gotta help us. Because, obviously, we know how much you love the show, and this year is the perfect jumping on point for that person in your life who has never watched Doctor Who. And I want you to go out there and recruit that person, and go and sit them down for Jodie's first episode, so you can go, "See!" There's no barrier to entry this year.

This is quite the change from Steven Moffat's era of Doctor Who. During his tenure, the series focused heavily on arcs and serialization. Of course, this led to some amazing stories, but it could be overwhelming for even the most ardent of fans. Seeing the Doctor return to more episodic adventures with her three new friends — Bradley Walsh as Graham, Tosin Cole as Ryan, and Mandip Gill as Yasmin.

In time, Whittaker's Doctor will no doubt build her own mythology, but for now, the thought of a season sans Daleks is actually refreshing. When you have a character who can travel throughout space and time, there's no reason to keep hitting the same beats over and over. While there's been no confirmation on story details just yet, Radio Times reports that the Doctor could cross paths with Rosa Parks and find herself entangled in the 17th-century witch trials this season. Both of these possibilities offer the show a chance to examine how gender plays a role in the way people perceive the Doctor in the past now that the character isn't a white man.

The core of the show — the Doctor's optimism, the sense of adventure, and the belief that people are at the heart basically good — will remain unchanged. But the scope of the show and the way the Doctor sees the world has the potential to become more inclusive than ever before. And there's really only one thing the Doctor would say to that: Brilliant!