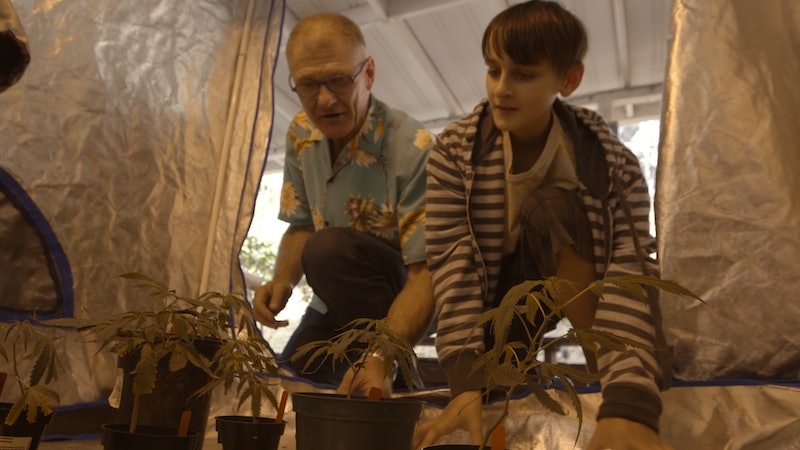 If you or your child had terminal cancer, how far would you go for potentially life-saving drugs? And what if those drugs weren't the usual pharmaceutical cocktails we've come to expect with cancer treatment, but medical marijuana? Would you give it to your teenager? To your eight-year-old? Would you give it to your nine-month-old baby? The parents in the new documentary Weed the People have said absolutely, without a doubt, yes, and the film shows them experiencing some amazing results. Weed the People explores how cannabis may just be the most innovative cancer treatment available, yet one that's also fraught with stigma. Whatever you thought you knew about its benefits, Weed the People might completely change your mind about medical marijuana.

Directed by Abby Epstein and produced by Ricki Lake, the team behind childbirth doc The Business of Being Born, Weed the People explores how medicinal cannabis oil is having significant and almost miraculous effect in the treatment of some cancers. Most folks today might be familiar with how medical marijuana helps those suffering from glaucoma, or with pain management, or as an anxiety treatment. Since medical marijuana also helps with nausea and appetite, it became extremely useful for cancer patients going through chemotherapy. But as the amazing stories in the doc show, the compounds in cannabis may actually be killing the cancer itself.

Take, for example, the case of little Sophie Ryan who was diagnosed with a brain tumor at nine months old. Sophie's parents initially opted out of chemotherapy treatment for Sophie, knowing that the intense treatment could wreak havoc on her tiny body. After a series of trial and error with varying doses of CBD oil to accompany her eventual chemo, Sophie's tumor actually began to shrink. Even her doctor says in the film, "I'm not sure it even is the chemo," admitting that the tumor's reduction in size may be due to the cannabis.

Then there's the absolute 180-degree change in 14-year-old Chico Ryder, whose intense pain from rhabdomyosarcoma was being treated with opiates. Not only did CBD oil help wean Chico off of the highly-addictive opioids, he also ended up in full remission. However, Chico's mother, Angela Smith, does say in the film that it was a huge hassle to find a trustworthy source of the CBD oil. One batch was cut with so much alcohol that it started irritating Chico's stomach. "In this day and age with all of the billions of dollars spent on cancer research, the medicine we're relying on is made in someone's kitchen," she says.

Eventually, Chico starts his own grow. "If someone had told me I'd be buying my 14-year-old son cannabis growing equipment for his birthday, I'd have thought you quite silly," Angela adds.

Angela's frustration reflects the unregulated "wild west" that patients are forced to partake in in order to find a strain that helps, that isn't cut with other ingredients, and isn't harmful. Because marijuana is still federally illegal, and because it's considered a Schedule 1 drug "with no currently accepted medical use and a high potential for abuse," according to the DEA, studies cannot be performed to research its efficacy in treating cancer or its other medicinal properties. As multiple doctors in the film point out, cannabis had been used as a medicine for thousands of years before it was made illegal 70 years ago. One Mormon mom even found medical books filled with cannabis recipes dating back to 1805, showing that America wasn't always as wary of cannabis as we are now. The filmmakers also visit other countries, like Spain and Israel, where cancer research using the plant's components is being performed. The results have been astounding, and it seems as if, here in the U.S., pretty soon the science will no longer be able to be denied.

In addition to following the emotional stories of specific patients, Weed the People dives into how a number of factors contribute to keeping cannabis from those who need it most, from the controlling pharmaceutical industry, to xenophobic and racist drug policies, to the stigma of marijuana. The documentary makes a compelling case for opening our minds and allowing doctors to use alternative methods to treat the most debilitating diseases. "Just as parents deserve to choose how they bring their children into the world," director Epstein says in the press notes, referencing her earlier film, The Business of Being Born, "we all have the right to access natural medicines that are potentially life-saving. These are basic human rights that institutions should not have the power to take away."

"When your kid's got cancer," Angela says, "the rule book goes out the window." Many parents and patients are willing to ignore the law just to survive, and that's always been true. Science is ever evolving, as is society and what we consider criminal. Weed the People offers up the idea that preventing the use of medicinal cannabis might be the real crime.

More like this
A Familiar 'Sex Education' Star Just Got A Major Role In Fantasy Teen Drama 'Silver'
By El Hunt
9 Movies & TV Shows That Prove Stanley Tucci Elevates Everything He’s In
By Jake Viswanath and Radhika Menon
Everything You Need To Know About The 'Knives Out' Sequel
By Bustle Editors
At 14, Jurnee Smollett Was Taking Meetings With Missy Elliot & Lauryn Hill
By Chloe Foussianes
Get Even More From Bustle — Sign Up For The Newsletter