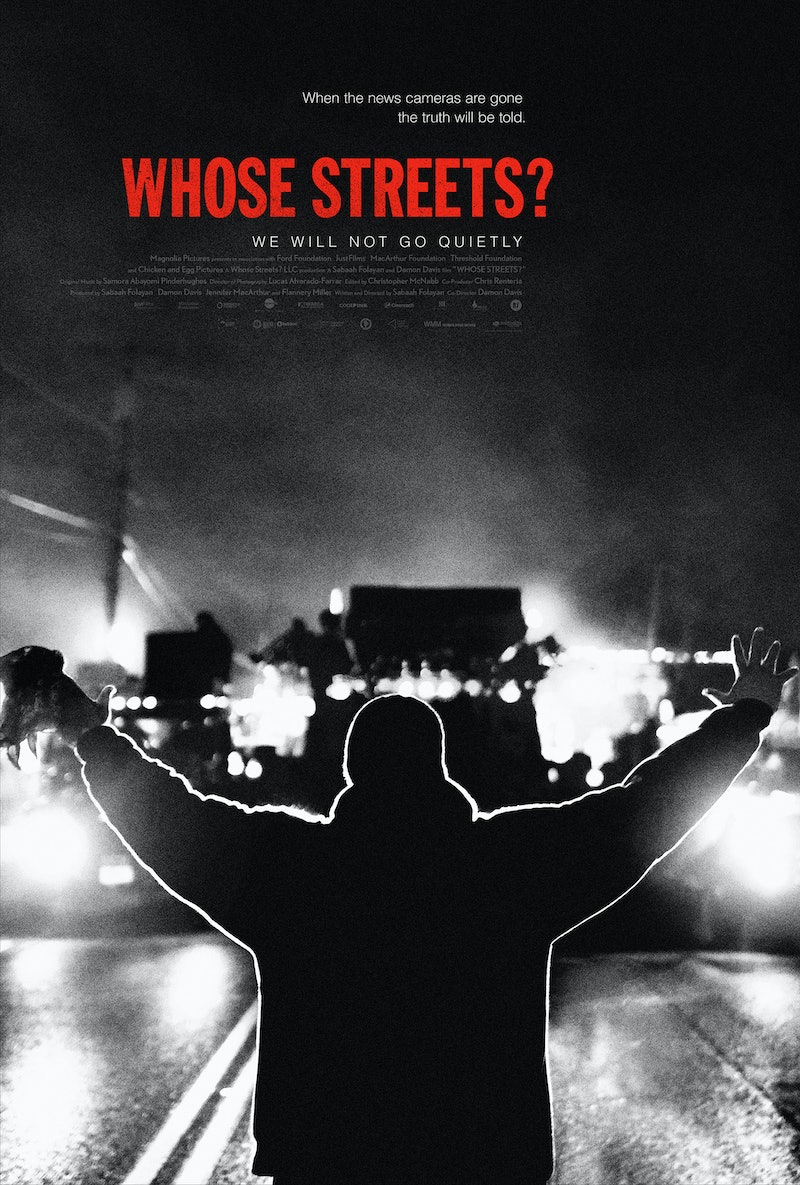 When people are triggered by seemingly endless instances of police brutality and racial profiling, their harmonized cries for justice become the music of a rebellion. In the new documentary, Whose Streets, director Sabaah Folayan captures the collective heartbreak and unstoppable resolve among the residents of Ferguson, Missouri following the murder of unarmed Black teen Michael Brown on Aug. 9, 2014. Three years later, almost to the day of Brown's death, hatred materialized in Charlottesville, Virginia when white supremacists descended on the University of Virginia campus denouncing the removal of a Confederate statue. In an interview with Bustle, Folayan says that activists should stay united aggressively and consistently, much like the protestors in Whose Streets and the counter-protestors in Charlottesville, to show the world what happens when a community bound in "righteous anger" reaches its fever pitch.

"This film's greatest power is to reactivate people's emotions and show people an image of resistance," Folayan says when we speak over the phone. "So that we can have the fuel and the understanding to keep going because we’ve just started in this struggle."

The uprising in Ferguson, shown in Whose Streets, exposed "a truly American problem," the director says: racist policies, practices, and behaviors implemented and adopted that keep the lives of Black Americans from truly being equal and valued in a majority white society. This issue was on full display in Charlottesville, where the alt-right protest resulted in the death of anti-racism counter-protestor Heather Heyer, and led to beatings of others at the hands of neo-Nazis in the name of white power.

As yet another community enraged and suffering loss, Charlottesville has seen its counter-protest voices manage to not only spark outrage across the nation, but also more counter-protests rebuking hatred, bigotry, and white supremacy. Folayan says that this movement makes clear that the question asked in "Whose Streets?" is more pertinent than ever.

"It's asking who gets the right to claim ownership over public space, over the way it's used, over the direction of our communities, of our cities, of our streets, of our country," she says. "It's meant to be open-ended because we felt like this is something that you have to constantly fight for."

Throughout Whose Streets, Ferguson activists, Brittany Ferrell and David Whitt, are shown working to answer this question. Ferrell and her wife Alexis Templeton led chants and stood arm-in-arm outside police headquarters with fellow protestors to get officers to back off of their non-violent protests — a rare win for the resistance. However, as Whitt tried to protect a memorial to honor Brown at the site where he died, officers repeatedly took it down — in essence reclaiming the street and ignoring the life that was lost.

Activists like Ferrell and Whitt and the counter-protestors in Charlottesville must be "constantly engaged in deciding the direction of our communities —otherwise someone else will," says Folayan. This engagement involves being committed to fighting injustice on both the local and national levels to "understand the real scope and definition of the problem, what its impacts are, and figure out how to solve it amongst ourselves."

For some people, reading the books, using the hashtags, attending the rallies and protests and candlelight vigils, while seeing little to no change, might be frustrating. Yet Folayan says that dedication is key to building a larger resistance against hate groups that are doing the same thing. "It's because these people take the time and energy to preach to their choir," she explains. "That's why they're obscure. They don't go and try to reach out to people on the left. They try to build solidarity within their own race."

Activists must build solidarity amongst themselves to advance the message of equality, and Folayan credits the Ferguson protestors with showing her and her film crew just how effective modern day activism is. "People were united in their righteous anger over [Brown's] death, and as much as it was tragic and irreparable damage was done by taking his life, there was something so beautiful that his legacy will be one of bringing people together and reminding people of what's really important," the director says. "It was that sense of shared purpose that made it feel really empowering to be out there."

In Whose Streets, complete strangers become a family, with the film showing that one cannot merely be a spectator in the face of injustice, even if the payoff isn't always tangible. Brown's family did reach a settlement with the city of Ferguson; yet officer Darren Wilson remains free of criminal charges. But by presenting the face of the Ferguson uprising as the efforts of an entire community, Whose Streets proves that unity, rooted in love, will always win over hate.