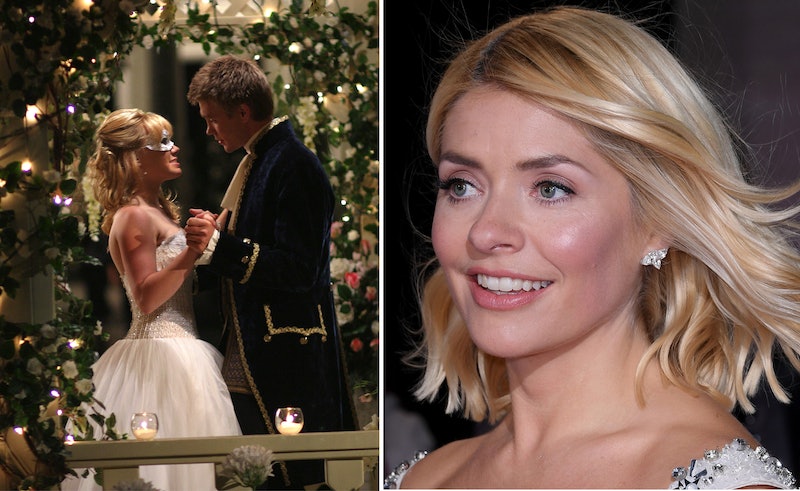 So remember that scene in A Cinderella Story where Hilary Duff shows up at her masquerade-themed prom, wearing one of the most iconic '00s dresses of all time? Of course you do. Every teen I know wanted Sam's white tulle dress with its fitted sparkly corset and Holly Willoughby's dress at the Pride of Britain Awards has proved that the fantasy's still going strong. She stepped out in a dress which was basically a sleeker, grown-up version of the style and I'm utterly obsessed.

Unsurprisingly, the gorgeous dress was crafted by British designer Jenny Packham who specialises in both bridal and couture pieces. Where Hilary Duff's beauty had a gigantic tulle skirt, Willoughby's was fitted more closely to her body and trailed along the floor for extra drama. Another minor difference was the fact that her bodice came with thin straps and TBH I love it just as much as the original.

Holly Willoughby seemed just as ecstatic as I am over her outfit, as she took to Instagram and hailed it "the dress of dreams." She also proudly displayed a bright red poppy pin in support of the Royal British Legion, the only pop of colour on her pale dress.

The dress she's wearing is called the Adara dress and according to Selfridges is an embellished, tulle gown in ecru — a fancy word for a very pale beige. It's priced at a pretty hefty £4,480, so it's basically a once in a lifetime kind of dress.

If you've fallen madly in love and want to pin it to your wedding board, I've popped the product below.

Hilary Duff, eat your heart out.

Her fresh-faced make up and wavy locks also took her into Disney princess territory, finishing off the look perfectly. (Note to self: try to recreate this look. She thanked the small village of pros who helped put the look together, mentioning her stylist Angie Smith, make-up artist Patsy O'Neill and hairstylist Ciler Peksah in her caption.

Speaking of Disney princesses, Holly Willoughby also posted a video of herself in the dress to Instagram which looks like it was ripped out of Sleeping Beauty. There's that final scene in the animated movie where Aurora and Prince Philip dance with one another and the ballroom falls away, leaving them dancing through the sky. Even if Willoughby was channelling her inner Robyn and dancing on her own, she still nailed the dreamy quality of the scene and I've basically had it on repeat.

Don't try and tell me this isn't the same scene as this one.

Jenny Packham doesn't only make gowns fit for princesses, the British designer has also previously dressed actually members of royalty. In fact, the brand is famously loved by Kate Middleton and Packham has designed some of Kate's best (and most important) dresses.

For example, all eyes were on Kate Middleton ahead of the BAFTAs earlier this year as the awards show followed in the vein of the earlier Golden Globes with an unspoken all-black dress code in support of #MeToo. As royals aren't technically allowed to weigh in on political matters, she navigated the hurdle by wearing a dark green Jenny Packham dress that featured a black band — possibly a little nod in support of the movement, without being explicit.

She has also chosen to wear Jenny Packham following the births of each of her children for the iconic picture taken on the Lindo Wing's steps, announcing her newborns to the world. For Prince George's birth, she wore a pale blue polkadot dress, a buttercup shift for Princess Charlotte's and a red Peter Pan-collared dress for Prince Louis' birth earlier this year.

There was also this dress rose sequin dress that she's worn to a couple of charity galas and I literally haven't stopped thinking about it since.

Here's hoping we'll see more princess-inspired dresses soon — I'm always down for a hefty dose of nostalgia. If anybody could wrangle me a Chad Michael Murray to boot, that wouldn't hurt matters either.