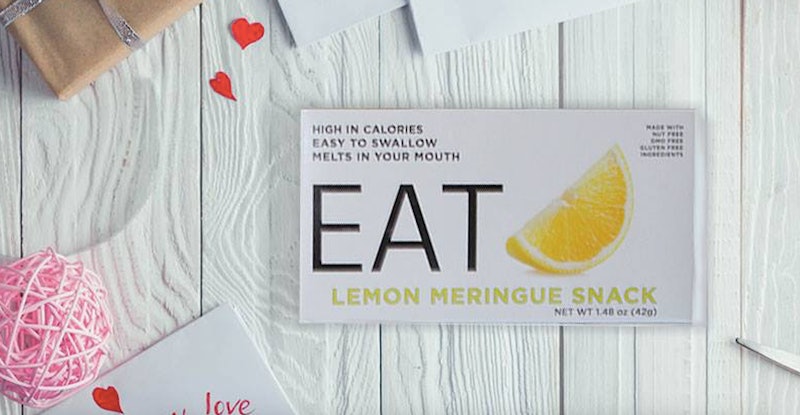 For folks who have dysphagia or sensory sensitivities, eating can be a fraught experience — but a new snack has been developed to ease some of those issues. Designed for people who have trouble swallowing, the EAT Bar, as it’s called, literally melts in your mouth, making eating not only easier, but also super tasty. EAT Bars are now available to order online — and they’re nut-free, gluten-free, and kosher, to boot. Sounds like a win-win situation!

The EAT Bar was developed by speech language pathologist Tia Bagan, M.S. CCC-SLP specifically to address the challenges surrounding food and eating faced by people with dysphagia, sensory sensitivities, and a wide variety of other conditions or circumstances that can impact your relationship with food. Each bar is made of meringue, so it crunches when you bite it, but also melts easily in you mouth if you don’t. It’s also covered in either Greek yogurt or chocolate, depending on the flavor. Speaking of, there are four varieties available: Lemon, Strawberry, White Chocolate, and Dark Chocolate.

According to the Mayo Clinic, dysphagia, or difficulty swallowing, can have a wide range of causes, including neurological disorders or damage, tumors, certain cancers and cancer treatments, and gastroesophageal reflux disease (GERD). It’s seen more commonly in older adults, although it can affect people of any age. Symptoms might include pain while swallowing, feeling like you’ve got something stuck in your throat or chest, drooling, frequent heartburn, and regurgitation, among others.

Meanwhile, sensory processing disorder, which is seen more commonly in children than adults, can also make eating difficult. Per WebMD, it’s not currently a standalone disorder (although some specialists believe it should be); it’s often seen alongside conditions like autism, and similarly, it exists on a spectrum. It can affect just one sense or many — and when it involves touch or taste, swallowing and eating can be a struggle.

The complications for both dysphagia and sensory processing disorder — and any number of other conditions and situations which can make swallowing difficult, or which result in a lack of appetite — are numerous: Malnutrition, weight loss, and dehydration comprise just a few. The EAT Bar, however, aims to combat these and other issues associated with difficulty swallowing or lack of appetite by providing a dietary boost in an easy-to-consume form.

Relying both on research and clinical practice, Bagan and her team knew that the EAT Bar would have to have a number of specific qualities in order to accomplish its goals, according to a piece published at the website Dysphagia Café in January: It needed to provide easy fuel; it needed to be able to melt quickly in your mouth with little chewing; and it needed to be simple for people with limited mobility and strength to be able to pick up and hold. As Bagan noted at Dysphagia Café in January, even the packaging serves a purpose: It “had to boldly state the word EAT, as to provide a directive cue for those individuals that may have speech-language or cognitive communicative deficits.”

The EAT Bar subsequently functions well as a snack; additionally, it can be incorporated into clinical evaluations or treatment, due to the fact that it acts as a sort of middle ground between liquids or purees and solid foods. In terms of the International Dysphagia Diet Standardization Initiative (IDDSI) framework — the global standardized definitions used to describe food textures and liquid thickness for people with dysphagia — the bar falls between Levels 5 and 7, making it what’s called a “transitional food.”

Perhaps most importantly, the EAT Bar is also designed to be a treat — to make food and eating a joyful experience, rather than a fraught one. As Bagan wrote at Dysphagia Café, “Food is so much more than just a source of nutrition. I have come to realize it’s truly a central part of the human experience.” If you’ve spent years struggling with food texture or the mechanics of eating, it can have an adverse effect on your relationship with it; at best, eating feels like a chore, and at worst, it feels like you’re fighting a losing battle. The EAT Bar aims to address those feelings and help people rediscover the joy and pleasure good food can inspire.

EAT Bars can be ordered online here. Choose from a sampler, or order just one or two individual flavors separately. Happy snacking!