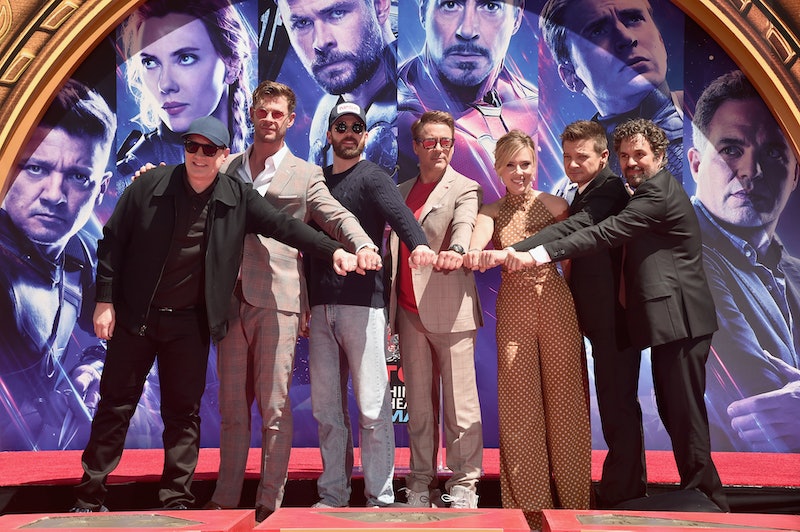 Spoilers for Avengers: Endgame ahead! Showing gratitude and respect to all the stars of the Marvel Cinematic Universe was never going to be easy and/or unemotional. You may already know that Endgame, which wraps up the saga of the original Avengers, doesn't have the typical teaser clip hidden amidst the names of best boys and grips. However, the Avengers Endgame credits paid homage to the team that started it all in a touching and appropriately corny way.

The only way that the Endgame credits could have been any more dramatic is if there was footage of the cast taking an actual curtain call with bows and standing ovations. It's not like they haven't earned it. With Captain Marvel and Endgame, the MCU passed the 11 year mark, and while the Avengers first teamed up in 2012, most of the cast has been at it much longer. So not only did the original six actors who made up Earth's Mightiest Heroes (Robert Downey Jr., Scarlett Johansson, Chris Hemsworth, Jeremy Renner, Chris Evans, and Mark Ruffalo) get their own title card, those title cards included an animation of their signature.

Oh, and there are almost 50 other actors in this credit sequence besides the original 'vengers — from Agent Carter star James D'Arcy to Winston Duke, Linda Cardellini, Captain Marvel herself Brie Larson, and Samuel L. Jackson getting both an "and" and an "as" for his work as tapestry weaver Nick Fury. Truly, not since The Twilight Saga — Breaking Dawn: Part 2 has an end credits sequence been so dang extra. If only the Endgame credits had also played to Christina Perri's "A Thousand Years," they would have fully captured the emotions that fans were feeling at the end of that movie.

Does this mean that all six actors are bowing out, and won't return in any future Marvel movies? It certainly seems that way for Evans, Downey Jr., and (to a degree) Johansson. The characters played by the latter two are dead — however, if you want to take all of those "Gamora is in the Soul Stone" theories from Infinity War and apply them to Natasha, by all means go ahead. RDJ will surely find a way to return to the MCU if the spirit moves him, but Evans said goodbye to Cap, and given Steve Rogers' reckless time-bending fate at the end of Endgame, he probably won't return. Could he show up in the Disney+ series The Falcon and The Winter Soldier, the way Harrison Ford would occasionally pop into the Young Indiana Jones Chronicles? We can only hope.

Johansson is slated to star in the rumored Black Widow solo film, at the very least, but her future in the franchise is uncertain. The way overdue film has also reportedly cast Rachel Weisz, David Harbour, Florence Pugh, and O-T Fagbenle. It will be directed by Lore's Cate Shortland.

As for the remaining OG Avengers — who knows? It certainly seems like Endgame was setting up Thor to join Guardians of the Galaxy Vol. 3, so hopefully we'll see more of Hemsworth there. Surely, fans wouldn't complain if a "New Asgard" film centering around Valkyrie joined the lineup as well. Ruffalo, according to Den of Geek, still has two films left in his Marvel contract. That's good news, as Bruce Banner's new Professor Hulk look and persona has just got to be explored in a later film. Jeremy Renner is also taking Hawkeye to Disney+... is his daughter Lila Barton going to be taking on the role Kate Bishop occupies in the Young Avengers comics, or what?

So, the Avengers Endgame credits sequence is a goodbye for some of the cast, and a thank you to others. Iron Man, Black Widow, Captain America, Thor, and Hawkeye started the "idea" that is the Avengers years ago, and this is the send-off they deserve.