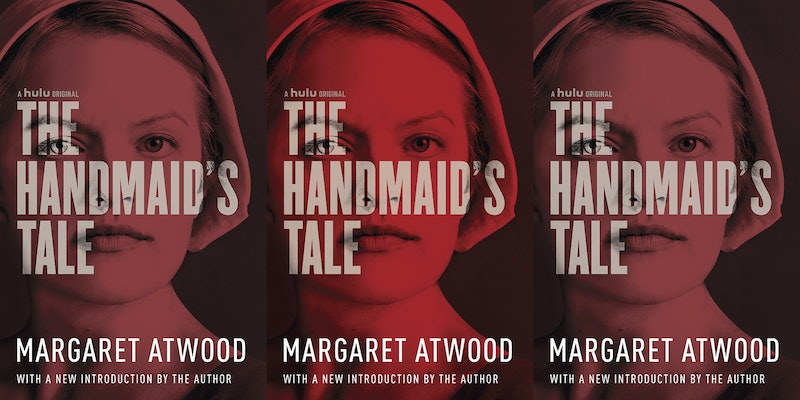 You can probably agree that The Handmaid's Tale has become grimly relevant these days, and not just because of the excellent Hulu show. Even before the adaptation premiered, the book had jumped to the number one slot on Amazon, and it currently holds the title of the most-read book of 2017. Clearly, somewhere between Hillary Clinton's defeat, the Woman's March, and the constant threat to reproductive rights in America, The Handmaid's Tale started to feel less like fiction and more like a big, neon warning sign.

Written in the mid-80s, Margaret Atwood's dystopian novel follows Offred, a "handmaid" assigned to a high-ranking Commander and his wife in a not-so-distant future. She is held prisoner and forbidden to read, write, or contact the outside world. She is meant only to bear children for her Commander, and if she fails at this task, she will be sent to her death.

Bleak, perhaps, but fairly straightforward as far as feminist nightmare-scapes go. You, the reader, (hopefully) understand the terrible injustice of Atwood's world. But Atwood doesn't let us off so easy: she ends with an epilogue, set even further in the future. It's an oft-overlooked section of the book. Offred's story is over, after all, what more is there to say?

The epilogue may seem superfluous at first, but it might very well be the most disturbing chapter of The Handmaid's Tale — and integral to understanding the book as a whole. In the space of few pages, Atwood forces us to question our own role as observers, both of Offred's tale and of every account of oppression throughout history.

The story of The Handmaid's Tale ends with Offred leaving the Commander's house, either to her salvation or to her doom. Then we're presented with the section titled "Historical Notes on The Handmaid's Tale," which claims to be a "partial transcript of the proceedings of the Twelfth Symposium on Gileadean Studies."

It quickly becomes clear that we're further in the future now, past the days of Gilead. The first speaker at this symposium is Professor Maryann Crescent Moon, of the Department of Caucasian Anthropology, from the University of Denay, Nunavit. In those few words, Atwood lets us know that we've landed in a different society now, where women can hold academic positions again and Caucasians appear to be a marginal group. So far, so good.

Professor Crescent Moon announces what seem to be re-enactment events, for the symposium guests to play-act as citizens of Gilead. That's... troubling. Then we're introduced to the keynote speaker, Professor James Darcy Pieixoto, Director of Twentieth- and Twenty-first-Century Archives at Cambridge University, England. This is the first portion of the novel to be narrated by a man, and the change is immediate.

Professor Pieixoto's opening line is to remark on Professor Crescent Moon's looks (suggesting that everyone has "enjoyed" her in more than one sense of the word), and suddenly this hopeful, post-Gilead future comes crashing down around us. Sexism is still alive and well. The Professor is here to discuss Offred's story, which was apparently discovered on cassette tapes, in a hidden locker in what was formerly Bangor, Maine. But he wants us, the audience, to question the veracity of Offred's claims. She could be lying, or exaggerating true events, he reminds us. And even if she is telling the truth, readers should remember that she lived in a different time, with different morals.

"We must be cautious about passing moral judgment upon the Gileadeans," says Pieixoto, "Our job is not to censure but to understand.”

Yes, after all of that, Offred's story is still filtered through the perspective a man. A man who is careful not to choose sides between Offred and her abusers.

Readers learn that Offred (which is, of course, not her real name) didn't even get to title her own story. The Handmaid's Tale was chosen by the two male professors who discovered her tapes. And, as Pieixoto tells us, “all puns were intentional, particularly that having to do with the archaic vulgar signification of the word tail.”

In Pieixoto's worldview we shouldn't judge the Commander's repeated assault of Offred, but making punny jokes about it is totally cool.

Pieixoto goes on to speculate at length about the identity of Offred's Commander. He and his fellow historians have put together enough clues to point to the mysterious Commander Fred being the historically significant Frederick R. Waterford, but he's disappointed that Offred didn't think to include the more "important" details of her time as a handmaid.

This is our guesswork. Supposing it to be correct—supposing, that is, that Waterford was indeed the “Commander”—many gaps remain. Some of them could have been filled in by our anonymous author, had she had a different turn of mind. She could have told us much about the inner workings of the Gileadean empire, had she had the instincts of a reporter or a spy. What would we not give, now, for even twenty pages or so of a print-out from Waterford’s private computer! However, we must be grateful for any crumbs the Goddess of History has deigned to vouchsafe us.

A woman's narrative is not history, to Pieixoto. It merely contains "crumbs" of history, those crumbs being any details that can possibly be gleaned about the Important Men around her.

At a quick glance, the "Historical Notes" section may simply seem to be further world-building, or comic relief. It provides us with a much needed dose of hope: Offred did escape, at least for a time, and Gilead did fall eventually.

But it also offers us one final twist of the knife, because Offred is still at the mercy of male authority. Her personhood is sacrificed in the name of "neutrality," because Pieixoto does not want to "judge" Gilead unfairly. Her pain is not merely erased, it is intentionally disregarded. People dress up like Gilead-ians for fun. Commander Waterford is a problematic but notable historical figure, and Offred's story is just a tool for learning more about him.

It's a gut-wrenching ending to a gut-wrenching book, but Atwood isn't about to let us get away without considering our own place in all of this. When you read about your own history, who do you consider to be authoritative? Whose stories go untold? How often do you write off acts of hate and torture as relics from another time? "Staying neutral" is functionally the same as siding with the oppressor, historical context or not.

Atwood wants you to reflect on our own history books, as you reflect on her fictional, future history. In fact, she invites you to challenge Pieixoto's reading of events with Pieixoto's own brilliant, final line:

"Are there any questions?"