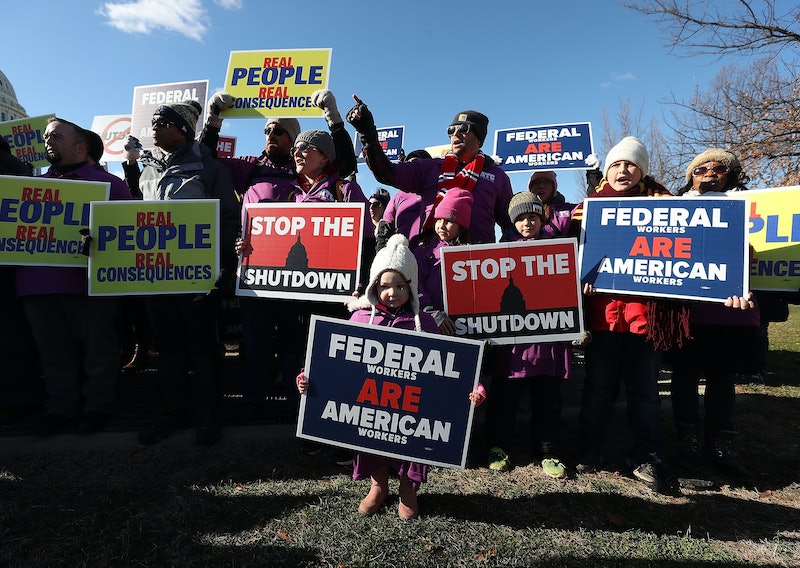 As a result of the government shutdown, which is rapidly approaching its third week, around 800,000 federal workers aren't receiving paychecks. In an attempt to protect those workers from financial hardship, congressional Democrats have introduced the Federal Employee Civil Relief Act, which would prohibit landlords and debt collectors from taking action against federal employees unable to pay their bills because of the shutdown.

“With each day that passes during President Trump’s shutdown, hundreds of thousands of federal employees are worrying about how they will pay for their bills even though their paychecks have stopped coming in,” Sen. Mark Warner, one of the bill's co-sponsors, said in a statement. “This important legislation ensures that federal workers don’t face repercussions for making the hard choice between paying for basic necessities and paying their student loans. This unnecessary shutdown is already hurting federal workers, they don’t need additional hardships that could impact their financial future.”

According to Warner's press release, the legislation aims to protect federal workers from eviction, foreclosure, repossession of property, falling behind in student loans and debt payments, or losing their health insurance as a result of the shutdown. It has over 10 co-sponsors in the Senate — all of them Democrats — and counterpart legislation has been introduced in the House of Representatives.

According to a report released by Senate Democrats, over 420,000 federal employees are required to continue coming to work during the shutdown even though they aren't getting paid. Another 380,000 workers have been furloughed, meaning they'll neither be coming into work nor getting paid. Affected employees include agents at the TSA, FBI, DEA and ATF, as well as around 88 percent of Homeland Security employees and 96 percent of NASA workers.

Depending on their work schedules, many of the affected workers won't receive paychecks that they'd otherwise receive on Friday, according to the Connecticut Mirror. It's unclear when those paychecks will go out; that depends on when the shutdown impasse is resolved, and if recent reports are any indicator, no such resolution is on the horizon any time soon.

Trump has demanded that any government funding bill he sign includes billions of dollars for a U.S.-Mexico border wall. Congressional Democrats, however, have staunchly refused to provide that money, and instead passed a government funding bill that doesn't include any wall money. Trump refused to sign it, and has said in recent days that he may "do a national emergency" — that is, declare a state of emergency at the U.S.-Mexico border — in order to begin construction on a border wall without Congress' permission.

Such action would almost certainly result in legal action, however, in part because experts say there is no crisis at the U.S-Mexico border.

Two unions that represent federal workers — The American Federation of Government Employees and the National Treasury Employees Union — are already suing the Trump administration over missed paychecks during the shutdown. The unions say that their members haven't been paid for the work they've done since the shutdown took effect on Dec. 22, and that this is a violation of the Fair Labor Standards Act.