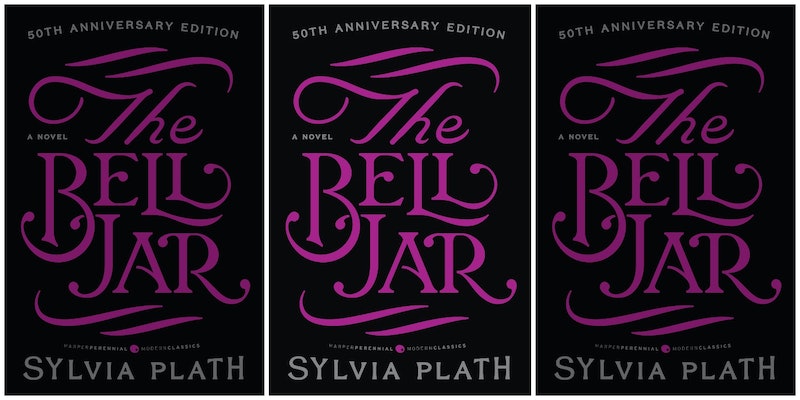 When I first read The Bell Jar, I was shocked to discover that it is not, in fact, a huge bummer of a book. I'd been hoping for the sort of terrifically sad book that I could read while sobbing in the bathtub. But that wasn't what I got (although I did still read it in the bathtub, out of principle). The Bell Jar is witty. It's real. It's harrowing too, of course, as it chronicles young Esther Greenwood's struggle with depression and soul-crushing summer internships. It's not a book that romanticizes mental illness, though. It doesn't glamorize sadness. The Bell Jar shows us immense pain, but it also shows us recovery. It's ultimately hopeful. And yet we're always quoting it out of context.

Sylvia Plath, after all, is known for her death as much as for her writing. The fact that she eventually died by suicide has all but overshadowed her life. This problem doesn't seem to affect male authors nearly as much—Ernest Hemingway also died by suicide, but we rarely roll our eyes at A Farewell to Arms as a sad book fit only for sad teenage girls. And yet, Plath has been saddled with the reputation of being "too depressing, guys, too depressing," as one two-star review on Goodreads put it.

Which brings me to the "fig tree" quote.

I read the quote long before ever reading The Bell Jar. You, too, may have come across the "fig tree" somewhere on the great wide web, or on the TV show Master of None. It goes like this:

"I saw my life branching out before me like the green fig tree in the story. From the tip of every branch, like a fat purple fig, a wonderful future beckoned and winked. One fig was a husband and a happy home and children, and another fig was a famous poet and another fig was a brilliant professor, and another fig was Ee Gee, the amazing editor, and another fig was Europe and Africa and South America, and another fig was Constantin and Socrates and Attila and a pack of other lovers with queer names and offbeat professions, and another fig was an Olympic lady crew champion, and beyond and above these figs were many more figs I couldn't quite make out. I saw myself sitting in the crotch of this fig tree, starving to death, just because I couldn't make up my mind which of the figs I would choose. I wanted each and every one of them, but choosing one meant losing all the rest, and, as I sat there, unable to decide, the figs began to wrinkle and go black, and, one by one, they plopped to the ground at my feet."

Nearly every young person can relate to the fig tree: that horrible, suffocating feeling of indecision, the sense that every choice you make for the future means giving up on ten other choices. The knowledge that you can only move forward, and that if you choose the wrong "fig," the right fig might fall and rot before you get to it.

There's nothing necessarily wrong with plucking this quote out of The Bell Jar — in many ways, it captures the crux of Esther's depression in a single paragraph. She feels inadequate, paralyzed by indecision, and unsure of what she wants. She's starving to death and yet unable to reach out and pluck a fig, any fig, from her tree. She can see future happiness, but doesn't know how to grasp it. She's numb to her own life. There's a reason that this quote resonates with so many people.

But people rarely seem to quote the page after the fig tree.

Esther has this disturbing vision while out on a date with Constantin, who's giving her a tour of the U.N. Being surrounded by all these accomplished, multilingual young people prompts Esther to start mentally listing all the things she's terrible at. She berates herself on her own flaws (she can't cook, she doesn't know shorthand, she's a bad dancer) until she spirals into the fig tree metaphor, sure that she will never live up to her promise as a gifted, scholarship kid.

Then, however, Constantin takes her to a restaurant, and Esther has to sit down and eat. Then, there's this:

"I don't know what I ate, but I felt immensely better after the first mouthful. It occurred to me that my vision of the fig tree and all the fat figs that withered and fell to earth might well have arisen from the profound void of an empty stomach."

Of course, that doesn't mean that the fig tree wasn't a genuine expression of her fears, or that a single sandwich has cured Esther of all her emotional anguish — but it's an important moment all the same. Plath isn't presenting us with a withering fig tree as the inevitable end to all young people with promise. She's showing us a young woman in great pain, who sometimes forgets to do things like eat. Esther's fears are valid, but the book is not about her succumbing to fear. It's about her slowly, steadily finding her feet again, one sandwich at a time.

The fig tree is an apt image for all those moments of indecisive panic. It's a good quote. But there are so many other metaphors in The Bell Jar that so rarely get quoted. Esther is often told that, in relationships, the man is the arrow and the woman is "the place the arrow shoots from." Six pages after the fig tree quote, she thinks to herself:

"The last thing I wanted was infinite security and to be the place an arrow shoots off from. I wanted change and excitement and to shoot off in all directions myself, like the colored arrows from a Fourth of July rocket."

And then, of course, there's the very end of the book, when Esther leaves the hospital, excited at the prospect of meeting her own future:

"My stocking seams were straight, my black shoes cracked, but polished, and my red wool suit flamboyant as my plans. Something old, something new... But I wasn't getting married. There ought, I thought, to be a ritual for being born twice—patched, retreaded and approved for the road..."

Because no matter how Sylvia Plath's own life may have ended, Esther will not starve to death in the crotch of the fig tree.