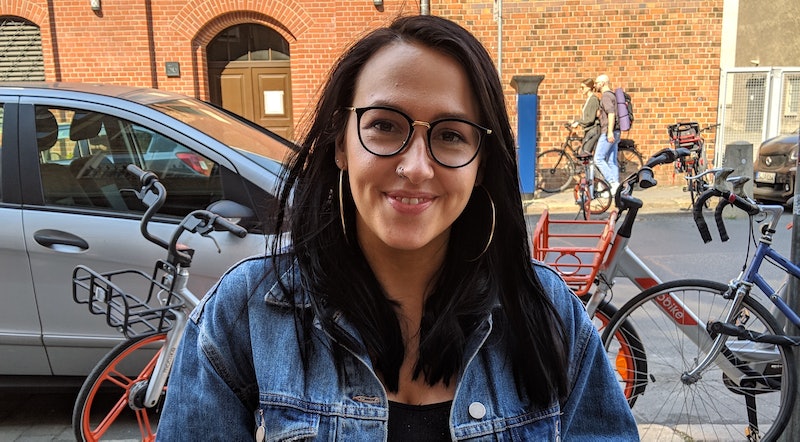 As a bisexual woman there's one question people ask me about 85 percent of the time — “When did you know?” It makes me want to ask them when they knew they were straight, as if it were something you realise one day. But I understand the question underneath it, when did I first see myself represented in society? Or when did I understand my sexuality?

While I officially came out pretty late on — not until I was about 21 — I knew I wasn’t heterosexual long before that. As a teenager I had a pretty steady boyfriend. The fact that I could pass as heterosexual was both a massive blessing and completely crippling. Outwardly presenting myself as straight meant I didn’t have to deal with the implications of being queer when I was still trying to figure out what being a teenage girl was. However, sexuality isn’t the sort of thing that goes away and in the midst of experimenting with far too much blue eye shadow and drawing tattoos on my arms in sharpie, I felt really alone.

Growing up with a younger brother, I have seen the Transformers films more times than I care to admit. The only thing that made it bearable was watching my one true love Megan Fox fixing up cars and being a total bad ass. After Googling her name (one of my favourite past-times as a 13 year-old) I came across Fox’s interview in Esquire where she came out as bisexual. It rocked my world. She said, “I think people are born bisexual and they make subconscious choices based on the pressures of society. I have no question in my mind about being bisexual.” Seeing one of the people I idolised most being so out and proud made me realise there wasn’t actually anything to be scared about.

In 2010, U.S. gay rights activist, journalist, and author Dan Savage and his husband Terry Miller produced a YouTube video in response to the rising rates of teenage suicide in the U.S. due to homophobic bullying. They used the strap-line “it gets better.” At the time I was struggling with not being able to tell anyone how I felt. I remember sitting in my bedroom, crying, and watching the video on repeat. I watched Lady Gaga’s version, Barack Obama's response, and all the other celebrities who came out in support of the project to raise awareness for LGBTQ+ mental health. It shook me. It was the first time I had heard people say they not only felt the same way I did, but also that it was okay and normal.

Even now, after being out for four years, I still gravitate to queer celebrities. Speaking about representation to Paper magazine Halsey said, “I'm a young, bisexual woman and finding that kind of representation in music is really complicated.” It's so incredibly true.

It might not seem like anything if you're straight in a heteronormative world, but hearing a female artist sing about being in love with another woman is so powerful. The world may seem like a far more accepting place these days, but for people like Hayley Kiyoko to produce songs like “Girls Like Girls” is activism. I can hardly imagine what it does for young people still trying to figure out their own sexuality. I know it would have brought me so much comfort.

Pride Month is all about celebrating the wonderfully diverse LGBTQIA+ community and all it stands for. Going to Pride marches is fun — I will absolutely be out there with glitter all over my face and a flag in my hand — but it isn’t always easy. Coming out meant I found some incredibly strong role models, who have stood up for themselves and people like them even when it would have been easier to stay quiet. In all of the partying this Pride month, I know I will be reflecting on the people who bravely spoke out about their sexuality and helped me feel I could do the same.