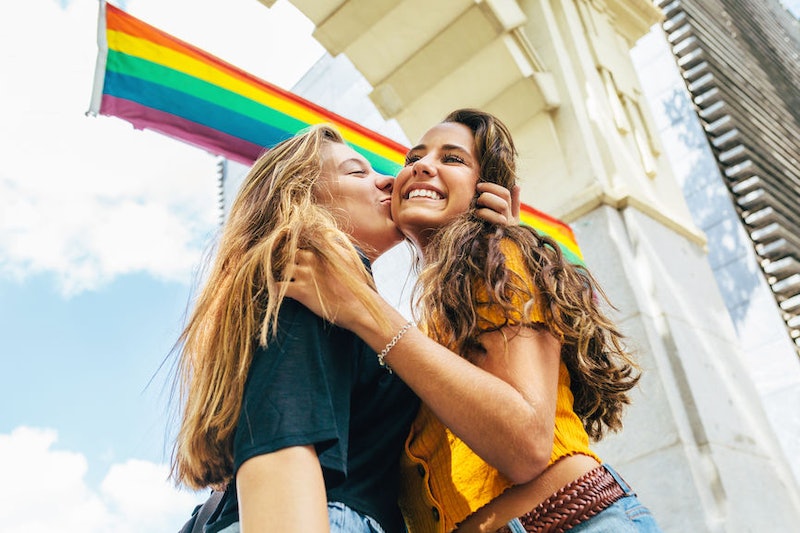 Lesbian, gay, bisexual, pansexual, trans, queer, asexual, intersex and so many more — there are so many ways to identify sexually. And if you don't want to, you don't have to at all. Many people now consider sexuality to be a spectrum rather than black and white. This is the idea that some people identify as completely heterosexual, some identify as completely homosexual and others fall somewhere in between. A recent study found that more Brits are open about identifying as homosexual or bisexual than ever before. But why is this? Is it that more people identify as LGB or is it that increased representation and acceptance has made people feel far more comfortable in their decision to come out?

The healthcare company, euroClinix surveyed 2,000 people around the UK in a mass study to find out about the sex lives of Brits. Of those who were questioned 87 percent of respondents identified as heterosexual, 6 percent identified as homosexual, and 7 percent identified as bisexual. However, there was discrepancies within age groups as while 24 percent of 18-24 year olds said they defined themselves as either homosexual or bisexual, only 9 percent of over 65s identified that way. It suggests that more young people feel comfortable about coming out as in 2014 a similar survey undertaken by the Observer in 2014 found that 21 percent of 18- 24 year olds would identify as homosexual or bisexual.

Speaking to the Independent about why there may be a perceived rise in LGB identifying individuals the LGBTQ+ support charity, Stonewall said, “although people may feel comfortable answering an anonymous survey, they may struggle to open up about their identity with friends, family or colleagues. To ensure that LGBT people feel safe and supported, it is vital to recognise the discrimination and anti-LGBT abuse that still exists.”

In a study of the experiences of same-sex experiences in America between 1990- 2014 Jean Twenge, Ryne, Sherman, and Brooke Wells found that acceptance of same-sex relationships quadrupled over this time period. Their study also found that same-sex activity almost doubled. This suggests that in places and communities where same-sex relationships are accepted and normalised people may feel more comfortable to explore their sexuality.

In an article for The Odyssey, writer Stephanie Corrigan supported this idea, arguing representation is key. She said, “with more exposure to same-sex couplings, the public can have more of an accepting view of LGBT couples. But not only that, any child who identifies as a member of the LGBT community would be able to finally see themselves in a character they love and to feel okay that they like the same sex, are transgender or don't like anyone at all because asexuality is a valid sexuality.”

It could be suggested that because identifying as LGBQ has become more widely accepted over time, younger people may feel more comfortable identifying as not 100 percent heterosexual. Growing up with queer icons such as Lady Gaga, Halsey, Sarah Paulson, and Ellen Page normalises queerness and may help with the coming out process. I know it did for me. Speaking to the Independent about the benefits of coming out Keith Carlton, a psychotherapist from the UK Council for Psychotherapy said, "it is great to see that more people now feel able to be open about their sexuality. When society forces people into the closet, it can have an awful impact on mental health,”