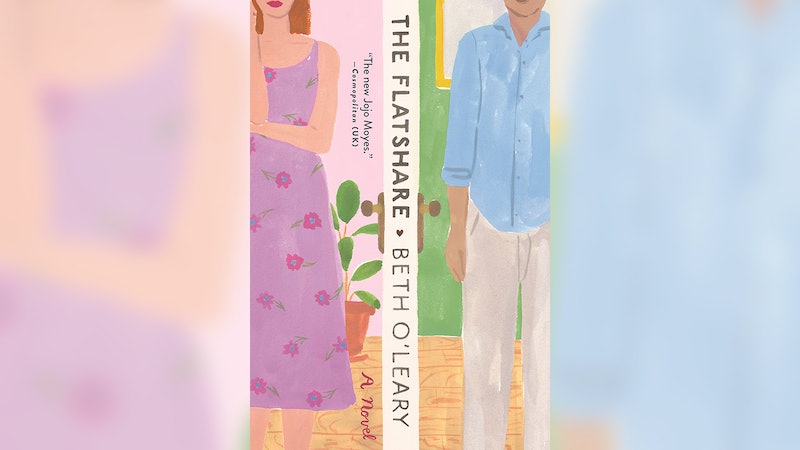 In the opening scene of Beth O'Leary's new rom-com, The Flatshare, Tiffy looks for a new flat in London, aided by her best friends, Gerty and Mo. There's technicolor mold on the wall, mushrooms growing behind the toilet, a dirty mattress. But Tiffy isn't just your average uprooted millennial on a budget — she's also going through a breakup with her on-again-off-again boyfriend, Justin, and she needs a new place to live, fast.

Even when the novel begins, there's a sense of foreboding. "Mo and Gerty never liked Justin," Tiffy says, and you get the feeling that there's something more to Gerty and Mo's intense opposition of Justin than just friendly post-breakup support. But O'Leary doesn't let the reader think about this too much just yet.

The Flatshare is, at heart, the story of Tiffy and Leon, an assistant book editor and palliative care nurse, who become roommates, albeit unconventionally: They share an apartment — and a bed — but they never actually plan to meet one another. Tiffy works days, Leon works nights. They both have their own personal and professional struggles to occupy their minds. We, the readers, are swept up in their hilarious, heartwarming courtship — first through the sticky notes they leave for each other around the house, then through texts, one supremely awkward shower encounter, and a mishap-filled trip to the sea — watching as they go from strangers to friends to something more.

But Justin is never far from Tiffy's mind, and consequently, the reader's mind. Tiffy learns that he is engaged to someone else and finds herself utterly depressed. Even after his engagement, he texts Tiffy, telling her how "special" she is, and she believes their relationship is about to be rekindled. Even as her feelings for Leon develop, Tiffy is drawn to Justin; he shows up uninvited to her work event and it takes serious self-control for her to turn down drinks with him. He sends her flowers. She wants Justin to call, and she doesn't know why.

"Maybe you spent a lot of time being told you couldn’t manage without him," Mo tells her. "That would explain why you want him back, even when you don’t want him... It’ll all sink in eventually, Tiff."

Then come the examples of gaslighting: Tiffy discovers clothes in her closet that Justin once assured her she'd thrown away. She remembers how he insisted that she hadn't invited him to a friend's party, even though she knows she did. She recalls Justin's continued references to her poor memory, her trouble with directions.

'The Flatshare' by Beth O'Leary
Amazon

At this point, it has become abundantly clear to the reader, though not yet to Tiffy herself, that her relationship with Justin was, and continues to be, emotionally abusive.

A 2005 study by the National Coalition of Domestic Violence found that 48.4% of women have experienced one or more psychologically aggressive behavior by a significant other. And 35% of all women who are or have been in married or common-law relationships have experienced emotional abuse. The numbers in England, where The Flatshare is set, are similar: In a 2015 study, 27.1% of women reported that they had experienced domestic abuse since the age of 16.

And while there are no specific statistics on how many people experience gaslighting, it is widely recognized by psychologists as a form of persistent manipulation and brainwashing that causes the victim to doubt themselves, and ultimately lose their own sense of perception, identity, and self-worth. For Tiffy, the truth of her experience with gaslighting and other emotional abuse comes in waves and in triggers that ultimately reveal themselves to be symptoms of post-traumatic stress disorder (PTSD). According to the Psychological Care and Healing Center, PTSD commonly results from emotional abuse. Seventy percent of adults in the U.S. have experienced some type of traumatic event at least once in their lives, and roughly one out of every nine women develops PTSD.

In many ways, O'Leary crafts the reader's experience of The Flatshare to mirror the trajectory of Tiffy's experience with Justin: There's the first sense that something isn't quite right with their relationship, then attempts to brush off the signs, then come the triggers that can't be ignored, and the memories of little things (like Justin's insistence that Tiffy has lapses in memory) and big things (like his tendency to use physical affection as a form of control) that make the abuse abundantly clear.

The Flatshare is undeniably a romance between Tiffy and Leon; it will give you butterflies, and make you laugh. But its also a deep-dive into the realities of relationships gone wrong, and what it truly takes to dig oneself out of the depths. Importantly, Tiffy's relationship with Leon is not the catalyst for her change. He is incredibly supportive of Tiffy as she works through her PTSD from her last relationship, and he encourages her when she decides to see a therapist to work through her trauma, but she does all the hard work herself. And even as she continues to experience flashes of memory and physical panic at the end of the novel, her determination to live a happy, fulfilling life beyond her trauma elevates this rom-com to an empowering look at resilience and healthy love.