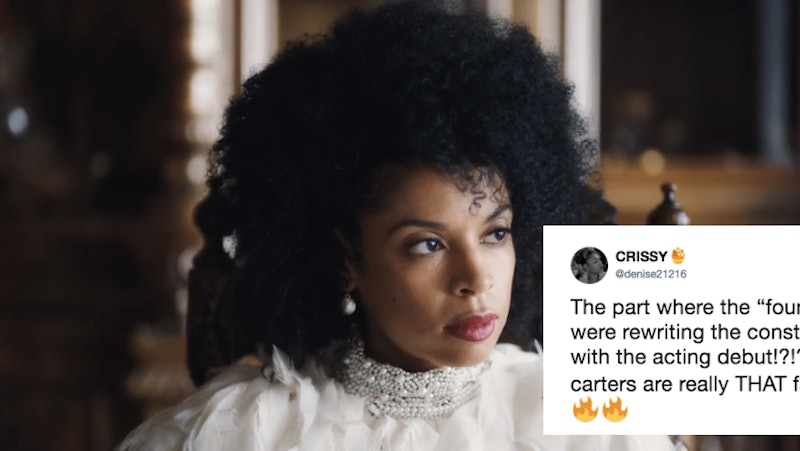 After teasing the video the day before, JAY-Z's latest music video dropped on Friday. And the 8-minute, Ava DuVernay-directed mini movie is already sparking so much conversation. Namely, the Founding Mothers in JAY-Z's "Family Feud" video are Twitter's new obsession. As co-collaborators on the project, JAY-Z and DuVernay managed to bring together some of Hollywood's most impressive women to represent the Founding Mothers and rewrite the Constitution. The line-up is simply awe-inspiring, but the most amazing aspect is definitely the fact that they're being led by Blue Ivy as the future president — a role which is played by This Is Us star Susan Kelechi Watson.

It's an empowering moment of feminism backed by a genius narrative, as the discussion goes on to summarize some of the ideologies which have been instilled in Blue Ivy as a young child. The segment features Watson explaining to the council that "America is a family and the whole family should be free."

In addition to Watson, the all-female amendment panel features the feminine forces of Rosario Dawson, Brie Larson, Janet Mock, Constance Wu, Niecy Nash, Mindy Kaling, and Rashida Jones, just to name a few. The dynamics of the gathering certainly sends a strong and powerful message about women as leaders and Twitter can not seem to get enough. Amidst the many prophetic themes — good, bad, and ugly — which are promoted throughout the visual, this moment of female empowerment is perhaps the most striking of them all.

1. The Power of Women

DuVernay joined in on the Twitter discussion amidst the project release. The director shared her belief in women, concluding that women deserve more than just "a seat" at the table.

One fan is astounded by JAY-Z and DuVernay's vision of Blue Ivy as a future world leader and urged others to take a moment to fully take in all that happened in the video.

Another fan easily pointed out the Founding Mothers moment as the highlight of the amazing video, worthy of its own separate films.

This fan is thankful for DuVernay and JAY-Z's vision of a women of color as the future president.

Another couldn't get over the amazing future that DuVernay created in the video.

6. The Future Is Fierce

Meanwhile, this Twitter user was impressed by the future leader of the free world, sharing side-by-side comparisons of Blue Ivy then and now.

Posting a behind the scenes shot of the video's Founding Mothers, one fan quoted a line from the powerful song.

Another social media user offered a round of applause for the visual offering.

Other fans simply can't wait to cast their ballots for Blue Ivy when 2050 actually comes.

In total awe of DuVernay's work on the project, one fan called out the beauty of the film's black girl magic.

This Twitter user commended JAY-Z's vision for the future.

This commenter pointed out an underlying political message amidst the Founding Mothers' discussion the 2nd Amendment in 2050.

Calling JAY-Z a "mastermind," another fan pointed out what this video is doing for women everywhere.

14. The Future Is Bright

One fan shared gratitude for the video's concept, forecasting that 2018 is going to be a great year in terms of change.

This user shares suggestion on how to make America great after getting a bit of inspiration from the "Family Feud" narrative.

In what appears to be another genius move by the Carter family comes a project in which they fuse their musical talent and social consciousness to create a visual masterpiece. If nothing else, "Family Feud" has entered to offer the world a vision of what the future holds while solidifying the fact that the future is female.