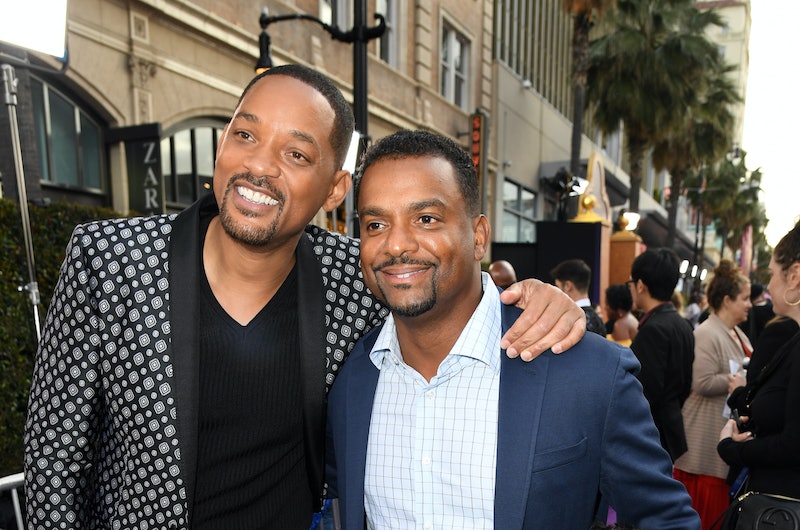 As if remaking an iconic movie isn't nostalgic enough, there was was a surprise reunion at the Aladdin live-action movie premiere. On May 21, some of the Fresh Prince of Bel-Air cast reunited at the Aladdin premiere to support Will Smith, who plays Genie in the movie. Alfonso Ribeiro, who played Carlton Banks on the '90s show, brought his son to the premiere. Tatyana Ali, who played Ashley Banks, hit the purple carpet with her family too.

Both of Smith's on-screen cousins hung out with him to celebrate the movie's release, but did anyone get a group picture of the three of them together? Fingers crossed. In the meantime, the nostalgia-inducing photos below will likely hold fans over.

In an interview with USA Today, Ribeiro joked about Smith's career since Fresh Prince wrapped. He remarked, "He's doin' pretty good." That's for sure. Even so, he hasn't forgotten about his roots. Actually, Ali and Ribiero's appearance at the premiere isn't the only Fresh Prince reference associated with Aladdin.

Smith managed to incorporate his beloved TV character into his latest role. On May 21, Smith appeared on The Ellen DeGeneres Show with fellow Aladdin stars Mena Massoud and Naomi Scott. During that interview, the actor admitted he was hesitant to take on the Genie role after Robin Williams played the same part in the 1992 animated movie. Smith knew there would be comparisons to the comedian's iconic performance.

Smith explained, "He really smashed this role. He revolutionized what you could do in these kinds of movies." No one can deny that. That's why it's understandable that Smith confessed, "I just didn’t think I wanted to touch it."

What made him change his mind? He decided to bring his past into the role. He told Ellen DeGeneres, "The music is where I find my ‘in’ to the Genie." Smith went on to share,

Why not allude the classic TV show? Everyone loves Fresh Prince. Aside from channeling his Fresh Prince role to play Genie, fans perceived another similarity in a clip released from the movie.

In the scene, Aladdin asks Genie "make me a prince." In response, Smith's character explained the importance of being clear with the wording of his wishes. Genie told Aladdin, "Be specific with your words, the deal is in the detail."

Genie hammered his point home by temporarily granting this wish. Instead of turning Aladdin himself into a prince, Genie created a prince for Aladdin. A man popped up in the background rocking lime green and bright pink, which many fans thought was an allusion to Smith's character on Fresh Prince. The far away prince even yelled, "Y'all seen my palace?" which does sound like a line from Fresh Prince of Bel-Air.

There's more Fresh Prince content in the movie though. The Aladdin choreographer revealed the magic carpet dances and does the Carlton as one of its moves, as in Ribeiro's signature dance on Fresh Prince.

Aside from being a fun night out with family (and TV family), it actually made a lot of sense for the Fresh Prince cast members to attend the premiere considering all of the references to the TV show within the movie. Plus, who doesn't want to see Will, Carlton, and Ashley back together?