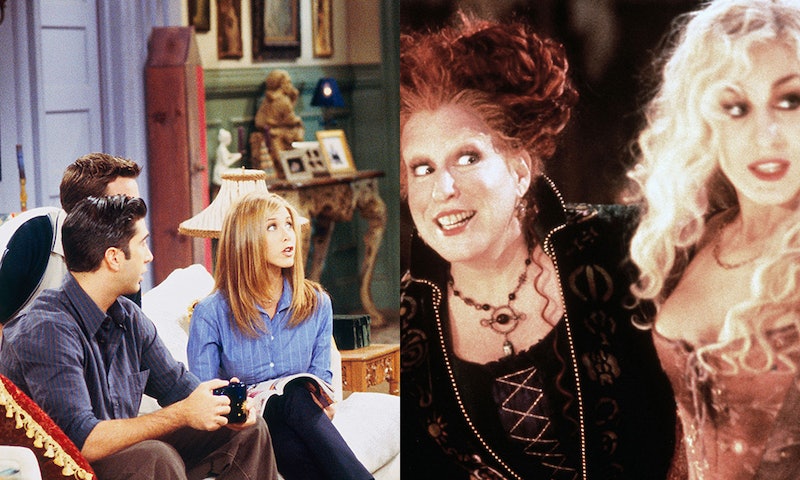 Although Friends was set in New York City for the duration of its 10-year run, most fans are well aware at this point that the series was not actually filmed in New York City. Monica's unrealistically giant Greenwich Village apartment? Sorry, that was a sound stage in Los Angeles, CA. That quirky coffee shop called Central Perk where Monica, Rachel, Phoebe, Ross, Chandler, and Joey had a permanent reservation on the giant couch in the middle? Yeah, Central Perk was a fictional coffeehouse built on the Warner Bros. set in Los Angeles. The fountain that can be seen during the opening credits of the series? Again: Not in NYC. Of course, it isn't abnormal for any TV series or film to shoot in LA and claim the setting is elsewhere — and it's also not abnormal to notice the same set being used in multiple different shows and movies, because many projects share the same backlots and sound stages. When it comes to a show as iconic as Friends, though, it's difficult to associate any of the filming locations with anything other than, well, Friends. That's why I, for one, was absolutely shook when, during a Halloween night screening of Hocus Pocus, I noticed a very familiar fountain in the background of one of the scenes. That's right: there's a very random Friends and Hocus Pocus connection you probably never noticed in all your years of watching the two classics, and it's super weird.

Like Friends, the 1993 film Hocus Pocus was filmed in LA but meant to be set on the East Coast: Salem, MA to be exact. The scene in question takes place about midway through the film, right after Max, Allison, Dani, and Binx go through with their plan to destroy the evil Sanderson sisters at the local high school. Thinking that it worked, the foursome run to a nearby park while cheering in celebration:

Look like anything you recognize? Let's take a closer look...

That's right: The opening credits of Friends and this happy scene in Hocus Pocus were filmed in the exact same spot, by the exact same fountain. The only difference between the shots, really, is that the high-rise buildings of NYC were edited into the title card image for Friends — but everything else, including the townhouse-like buildings behind the fountain, are exactly the same. Mind blown.

While the fountain may have gotten more airtime on Friends, Hocus Pocus actually used it first: The film was released in 1993, whereas Friends premiered in 1994. That's not that big a difference in time, but still, Hocus Pocus did the whole frolicking around a fountain bit first. In a way, you could say Friends was influenced by this classic Disney film... and it makes you wonder, would we even have the opening credits scene of Friends without it?

Also worth noting: in the Friends opener, we never actually see the rest of the park apart from the fountain — so if you've ever found yourself wondering what the rest of it looks like, Hocus Pocus can answer that for us with this shot of Max talking to Binx the cat:

Anyway, there you have it: The Friends and Hocus Pocus connection you probably never noticed, even though both projects came out over 20 years ago. Never let anyone tell you that noting good comes out of rewatching the same shows and movies over and over again until every detail is burned into your brain so much that you notice things like this.