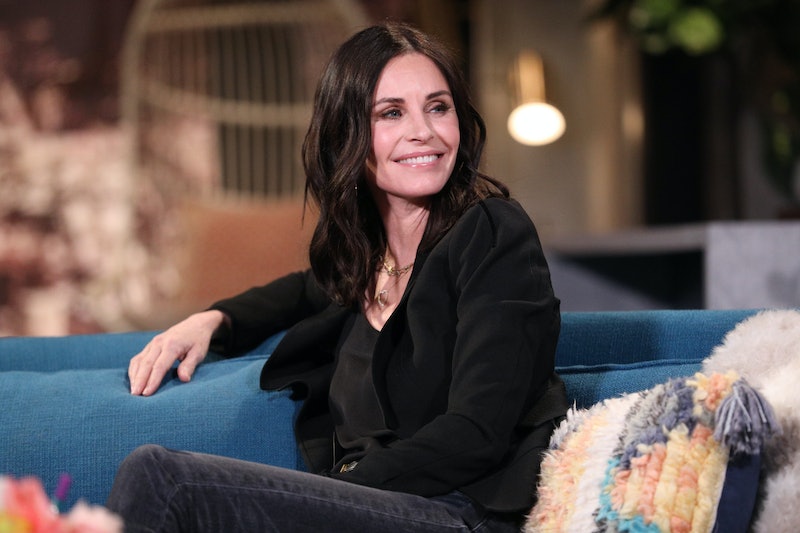 It's no secret that the Friends fans couldn't be more excited for the cast's upcoming reunion special on HBO Max. And it turns out, the cast is just as excited. Courteney Cox is teasing the Friends reunion in a new interview, and the actor who played Monica Geller for 10 seasons said she can't wait sit down with all of her cast mates once again.

"So the exciting thing is that we're all going to get together for the first time, in a room, and actually talk about the show, and it's going to be on HBO Max, and I'm so excited," she told E! News in an interview published on Feb. 26.

Believe it or not, but Cox, Jennifer Aniston, Lisa Kudrow, Matthew Perry, David Schwimmer, and Matt LeBlanc don't get together for a Friends cast reunion all the time, nor do they really talk about about the show. "We really haven't all done that, and actually sat there and talked about and reminisced about this incredible experience that we had," she admitted to E! News.

The Friends reunion special was confirmed on Feb. 21 by HBO Max president Kevin Reilly. The cast also took to Instagram to announce the news. Alongside a throwback photo during Friends' promotional days (except for LeBlanc who used an image from MASH), they all wrote, "It's happening..."

A rumor of a Friends reunion special first surfaced in November of 2019, after Aniston hinted that the cast was working on "something" together a month prior. Now, it's finally a go. The special doesn't have a title yet and it will be unscripted. Creators Marta Kauffman and David Crane are returning as well to contribute to the reunion, which is set for a May debut. And every single Friends episode will also be available for streaming on HBO Max that same month.