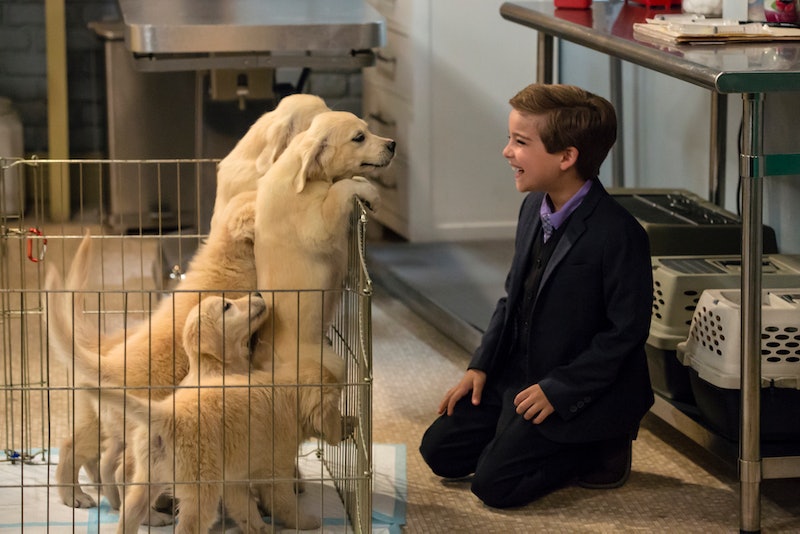 The Tanner-Fuller family just lost a beloved member. Fuller House’s dog Cosmo has died. On Monday, the show’s official Twitter account broke the news that Cosmo, the Netflix series’ golden retriever, passed away due to complications from surgery. Alongside four photos of the very good boy, Fuller House’s Twitter wrote, “We're sad to share that the Fullers' faithful dog Cosmo, who grew up on our set, passed away after complications from surgery. There will never be another quite like our boy. We'll miss him forever.”

Cosmo has been a furry staple of the Full House revival since its debut on Netflix in February 2016. In the series, viewers learn that Cosmo is the great-grandson of the Tanner family’s beloved dog Comet from the original 1987 ABC sitcom. Cosmo was also one of the first characters introduced to viewers ahead of the official debut of the revival, which follows Candace Cameron Bure as she reprises her role of DJ Tanner, a widow and mother of three children. In the first Fuller House teaser trailer, Cosmo anxiously waits by the front door for his humans to return home.

On Instagram, Bure mourned the loss of Cosmo with a series of photos of the late dog. “Our sweet boy Cosmo is now running around in doggie heaven,” she wrote. “I imagine he’s playing with Comet right now. Cosmo has been in Fuller House since the start and we are heartbroken that he passed away during surgery complications. You’ll be so missed love bug.”

Soni Nicole Bringas, who plays Kimmy Gibbler’s daughter Ramona on the series, also paid her respects on Instagram. “Cosmo, you completed our family,” she wrote. “You were such a good boy, always working hard, excited to play and every single one of us loved getting to see you each week.” Bringas then referenced Cosmo’s dog trainer and wrote, “Denise, our wonderful animal trainer, I know how much you cared for Cosmo as if he were your own son. We are so appreciative to both of you for all the time and love you gave the show.”

Fox and Dashiell Messitt, the young twin actors who share the role of DJ Tanner’s son Tommy Fuller Jr., also paid tribute to Cosmo on Instagram. “Heartbroken over losing one of our favorite faces,” they wrote. “RIP Cosmo.”

Fuller House released the first half of the show’s fifth and final season on Dec. 6. While a premiere date for the second half of Season 5 hasn’t been announced yet, Bob Saget teased that the conclusion would be a “really nice goodbye” filled with closure. He told Us Weekly in December of bidding farewell to Danny Tanner for the last time, “I was crying all over the place. “It brought back a lot of memories for me.”

Fuller House returns to Netflix in 2020. Given that the series wrapped production in November, Cosmo could still very much make a posthumous appearance in the second half of the final season.

More like this
'GoT' Star Emilia Clarke Says She "Just Can't" Watch 'House Of The Dragon'
By Brad Witter
Here’s What Happens To Bill & Frank In 'The Last Of Us' Video Game
By Brad Witter
Michael B. Jordan Tackled His "Public Breakup" With Lori Harvey On 'SNL'
By Brad Witter
At 28, Rosie Perez Risked Her Career To Stop Playing Stereotypes
By Gabrielle Bondi
Get Even More From Bustle — Sign Up For The Newsletter
From hair trends to relationship advice, our daily newsletter has everything you need to sound like a person who’s on TikTok, even if you aren’t.