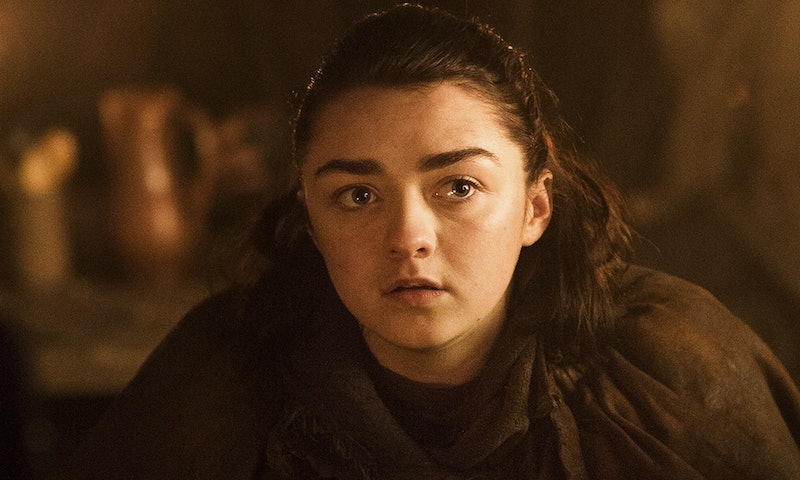 From the Seven Kingdoms all the way to Corellia, it turns out there was a Game of Thones cameo in Solo — and everybody missed it. In the latest episode of behind-the-scenes web series, The Star Wars Show, it was revealed that a well-known Game of Thrones direwolf had a Solo cameo you might not have noticed, ScreenCrush reported. That's right: a direwolf from Game of Thrones went to space in Solo.

Saxon is a Northern Inuit, but on Game of Thrones he's known as Nymeria, the direwolf adopted and raised by Arya Stark. Now, in Solo: A Star Wars Story, Saxon plays a Corellian hound. As a creature on Han Solo's home planet, Corellia, the adorable pup had to wear a suit coated in mock-scales and adorned with spikes, to make him look like the fierce intergalactic creatures from the film, who chases Solo, played by Alden Ehrenreich, and while he might be vicious — and unrecognizable — in the movie, he's incredibly cute IRL.

In the clip, host Pablo Hidalgo of the Lucasfilm Story Group, talks to Saxon's handler, Jo Vaughan and, Sherri Hazzard, one of the movie's key fabricators. "He's done this for quite a while," Vaughan tells Hidalgo. "He's done quite a few filming jobs, and for this particular film, we've trained him to wear a suit so that he doesn't look like a dog at all. He looks like another creature entirely."

As far as getting Saxon accustomed to his costume, Hazzard says they start "with a lycra bodysuit, which we get these used to getting in and out of the suit, build everything up very slowly, and then once we've got that, we start adding muscle shapes and then we just build it up from there."

Saxon's appearance in Solo is not the first time the Game of Thrones and Star Wars worlds have collided. Gwendoline Christie, who plays Brienne of Tarth in the show, appeared at Captain Phasma in 2015's The Force Awakens and The Last Jedi in 2017. Emilia Clark, who plays Daenerys Targaryen on the show, also played Qi'ra in Solo, who, as is revealed in a mind-blowing twist at the end of the film, had been working for notorious Star Wars villain Darth Maul as part of the crime group, the Crimson Dawn.

According to Entertainment Tonight, even Ehrenreich didn't know about Darth Maul's cameo until they were "going back and doing a few pick-up [shots]."

"There was a part in the script where it said 'somebody appears' and it wouldn't say who," he told ET at a June screening of his film, The Yellow Birds. "So there was a lot of speculation amongst the crew and cast about 'who is that going to be?' and then I found out like a few months ago."

While there's no telling at the moment how prominently Maul will feature the next Star Wars film, his reappearance does raise plenty of questions about how he survived after he was cut in half by Obi-Wan Kenobi in The Phantom Menace. The fate of Saxon's character in Solo is equally as mysterious.

At the very least, it seems that Game of Thrones and Star Wars will continue to overlap, as Qi'Ra is set to make another appearance, as Clarke told The Hollywood Reporter in May that she had signed on for multiple films, though she did say that didn't guarantee that she'd reprise her role.

The actor has also teased another potential opportunity for a Game of Thrones crossover, telling ET at the Solo premiere in May that she had someone in mind should they need to cast someone to play a young Luke Skywalker. "I feel like I have to say Kit Harington," she said. "Because I have to, do you know what I mean?"