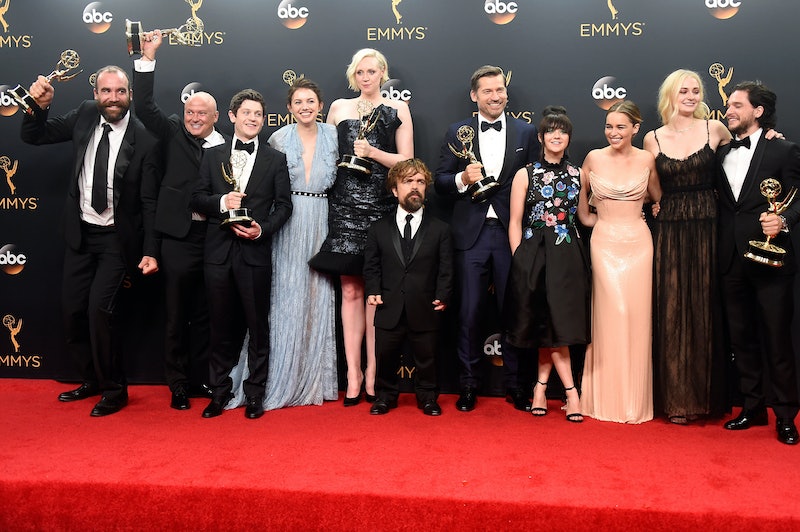 HBO's most epic television series, Game of Thrones, has been an Emmy darling the past couple of years. The show has won 38 Emmys since it premiered in 2011. But this year, the Game of Thrones cast won't be at the Emmys in full. And the reason why is actually legit.

According to TV Guide, the eligibility period for television shows (i.e. when they would have to air to be considered for an Emmy nomination) was from June 1, 2016 to May 31, 2017. Since Season 7 of Game of Thrones premiered on July 16, 2017, the show just missed the cut-off date to be eligible for this year's Emmys.

Yes, that means that there won't be any adorable Maisie Williams and Sophie Turner BFF moments or friendly displays between onscreen foes/siblings Peter Dinklage and Lena Headey. It also means that there won't be any cute moments between GoT couple Kit Harrington and Rose Leslie. That is, unless any of these stars get invited to the award show anyway.

Game of Thrones' lack of nominations this year doesn't mean that it's impossible that any of Game of Thrones cast members will be there in some fashion (although, none of the cast are listed as a presenters nor do any appear in any of the other nominated series this year). It just means that the entirety of the cast won't come because their show wasn't nominated.

One of the best parts about the Game of Thrones cast attending the Emmys is that there's always the potential for some of them to give the fans some insight on the show. Now, there won't be any chance of the cast giving out some fun (maybe even spoilery!) info. For instance, in an interview with TV Line last year, Clarke undoubtedly referred to the epic battle scene in "The Spoils of War" and gave fans a taste of what was to come. Game of Thrones Season 8 may not even premiere until 2019, so it would have been nice to get any kind of info from the cast during their Emmys red carpet interviews.

With Game of Thrones out of the running for all of this year's drama categories, what shows are even expected to win? And what other series got the chance to shine with the most nominations this year? Another HBO other hit drama series, Westworld, received the most nominations for a television drama with 22 (it tied for the most nominations with Saturday Night Live). Westworld was followed closely by Stranger Things, which received 19 nominations, and The Handmaid's Tale, which received 13. It's pretty much anyone's game for one of the biggest awards of the night, Outstanding Drama Series, an award Game of Thrones previously won twice in a row. Without the HBO hit to contend with, some say that either This Is Us or Stranger Things may walk away with one of the biggest prizes of the night.

The seventh season of GoT is certainly not out of the running for next year's Emmys, which will be the 70th anniversary of the awards. Next year will probably be a strong showing for the HBO drama (if the series' previous 38 wins and numerous other nominations indicate anything). So, prepare yourselves for next year when the whole case will likely take over the Emmys red carpet.