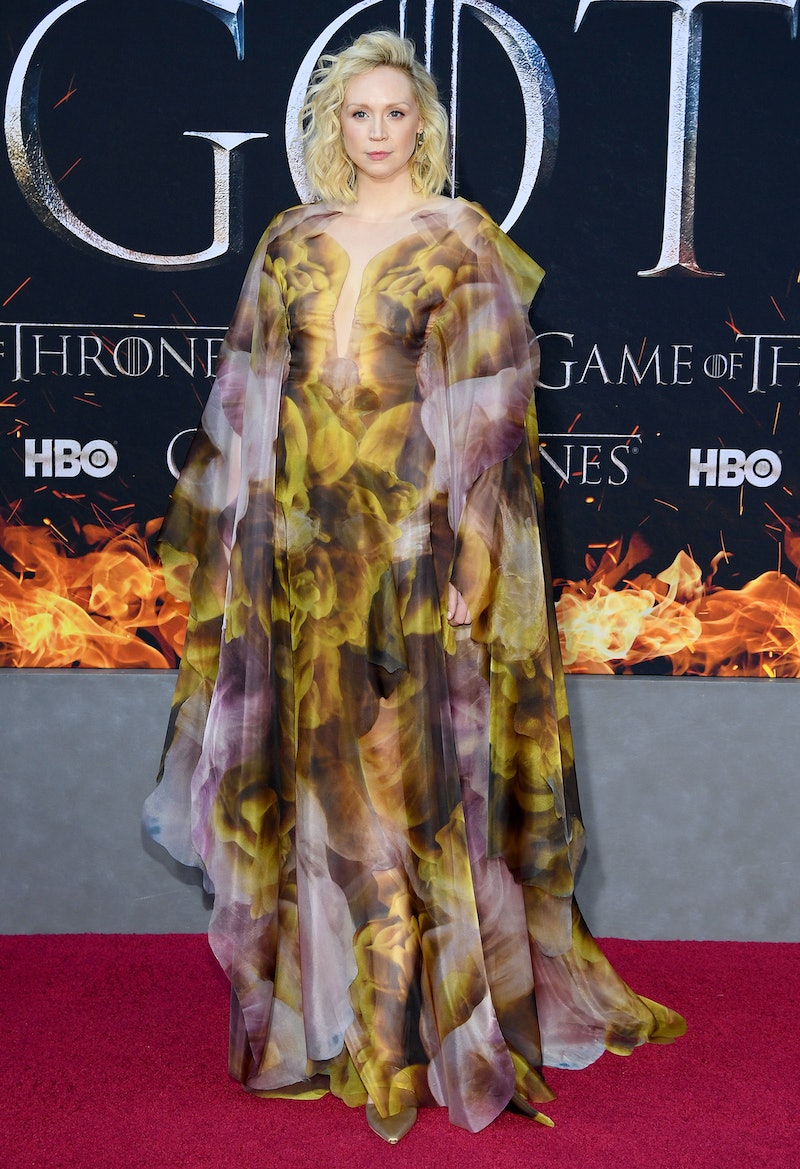 The women of Game of Thrones know how to slay on the battlefield and in a throne room, but they clearly also know how to slay a red carpet. The Game of Thrones' cast's final season premiere outfits reveal that while they may be in period costumes for a majority of their year, they couldn't let the series finale of the popular television series go by without a proper style send-off.

While you probably already know that Game of Thrones' final season is set to debut its first episode on April 14, you may not know that the show had their final red carpet premiere last night on April 4. Given that the show is about to enter its final season, basically every member of the cast walked the carpet, and yes, that includes dead characters' actors. From Natalie Dormer's Margaery Tyrell to Rose Leslie's Ygritte, some of your favorite ladies of past season came back to celebrate the show, and they looked incredible doing so.

While the ladies of Game of Thrones may be decked out in armor like Brienne of Tarth or all black, fur lined gowns like Sansa Stark, fans of the series got to see the women in their personal styles last night, and they all looked hotter than Drogon's flames.

Maisie Williams rocked some seriously glam ruffles and an ultra-cute bow for the premiere. Basically, the look was the opposite of her character Arya's thick tunic and pants look. Plus, Williams even changed up her pink hair for a purple look. As for beauty, Williams was actually wearing the Urban Decay x Game of Thrones collection with makeup done by Kindra Mann.

Sophie Turner's black smokey eye is everything, and honestly, if Sansa Stark were from 2019, she'd probably wear one as well. As for Turner's outfit, the corseted bodice of her dress could definitely be an homage to her costumes for the show.

Emilia Clarke's charcoal teal gown with a tulle overlay was all the drama the Mother of Dragons needed, but her makeup added even more of a punch to his fashion-forward look.

Gwendoline Christie did not come to play on the Game of Thrones red carpet. While her character Brienne of Tarth may not rock a dress, Christie certainly does and look SO good doing it.

Nathalie Emmanuel's character Missandei is an important advisor to the Mother of Dragons, so is Emmanuel showing support for who she thinks should be on the Iron Throne with this flaming red dress? Who knows, but fans do know she looked amazing, and like Williams' she was rocking the Urban Decay x Game of Thrones collection.

Ygritte may not have survived the show, but Rose Leslie has survived in fans' hearts (and Kit Harrington's). Her gorgeous red, palm leaf dress was a serious carpet standout.

Natalie Dormer definitely showed up and showed out just like her character Margaery Tyrell would have.

How perfect is Hannah Murray's bright yellow gown? It's totally spring-ready. Plus, it's the perfect color for her sweet and charming character Gilly.

A minute has passed since fans have seen Carice van Houten's Melisandre, but the actress decided to ditch her Red Priestess garb and looked stunning in all white.

Varma's gorgeous hot pink pants and co-ordinating top are so vibrant and gorgeous. While Ellaria Sand may not have chosen hot pink herself, the bold look is still totally her vibe.

Tyrion's former paramour Shae may not have been the most trustworthy of choices for the Hand of the Queen, but seeing Kekilli looking fabulous on the red carpet was likely a welcome sight for fans.

Clearly, the ladies of Game of Thrones are just as capable of slaying on a red carpet as they are on a set.