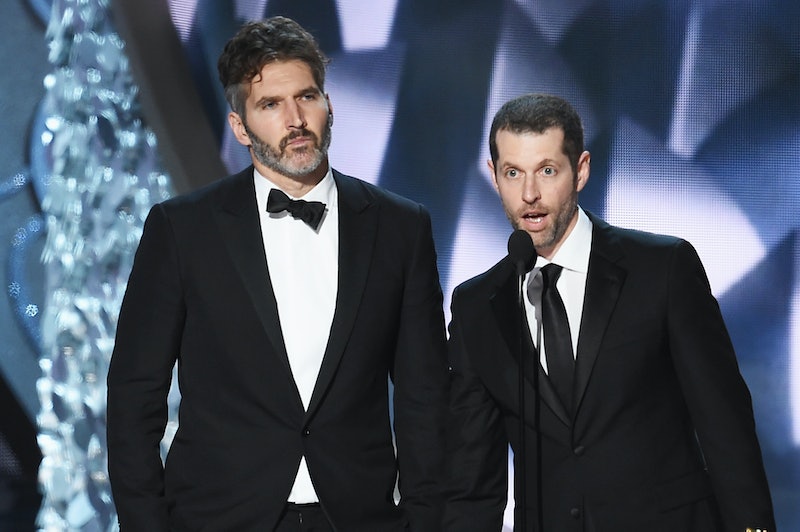 After Game of Thrones creators David Benioff and D.B. Weiss bowed out of 2019 San Diego Comic-Con last minute, it seemed like fans were never going to get answers about Season 8. In a new interview with Japan's Star Channel though, the pair opened up a bit about the final season, the show's staying power, and one noticeable gaff. No, it may not be the mistake fans are looking to discuss, but the Game of Thrones creators finally addressed the coffee cup left in one major scene in the final season.

The Starbucks coffee cup made its debut in "The Last of the Starks" episode, where it was visibly left on the table in front of Daenerys while the soldiers celebrated their victory over the Night King. It's a modern day faux pas that fans were quick to jump on, especially in the wake of their frustrations over the Battle of Winterfell, which was gorgeously shot but difficult to actually see on normal TV screens. HBO later digitally removed the cup, but as the saying goes, the internet never forgets, and the memes lived on.

Now with the show come and gone and Game of Thrones netting a record 32 Emmy nominations, the creators had a good laugh about the whole debacle with Star Channel.

"I think in Persian rugs it's tradition that you make a little mistake when you're making the rug because only God can do anything perfect, so for us I guess that was just our [mistake]," Benioff said in regards to the coffee cup.

"That's why I put the coffee cup there... a conscious, concerted statement of our imperfection," Weiss joked in response.

"And then, eventually, it was just kind of funny. This one is just a mistake, and it’s kind of funny to us now, you know?" Benioff said with a laugh, as Weiss shrugged.

After the episode first aired, HBO made light of the drink's appearance, joking in a tweet that "the latte that appeared in the episode was a mistake. Daenerys had ordered an herbal tea."

As for who the cup actually belonged to, when Sophie Turner went on Conan, she jokingly blamed Kit Harington. “The coffee cup was where Kit's chair was. First I blamed it on Emilia, but I don’t think Emilia would do that," Turner explained. "Kit is lazy and I think he would have done that. It was in front of Kit’s chair."

“I hear this every day of my life, this coffee cup thing, so it’s good to know that the coffee cup got more press than the final season altogether,” Turner continued with a laugh.

Both Lena Headey and Emilia Clarke have jokingly posted on Instagram about the caffeinated mistake, and Ser Davos' Liam Cunningham quipped on Conan that "these things happen, it’s a big job, people run in, and Emilia probably drinks too much coffee.”

It may seem silly that a single coffee cup had so much staying power, but it was a little thing that spoke to a larger frustration about how Season 8 felt rushed compared to earlier seasons. While fans are unlikely to hear from Benioff and Weiss about their other concerns regarding the series finale, at least we finally know the coffee cup was really just an honest mistake.