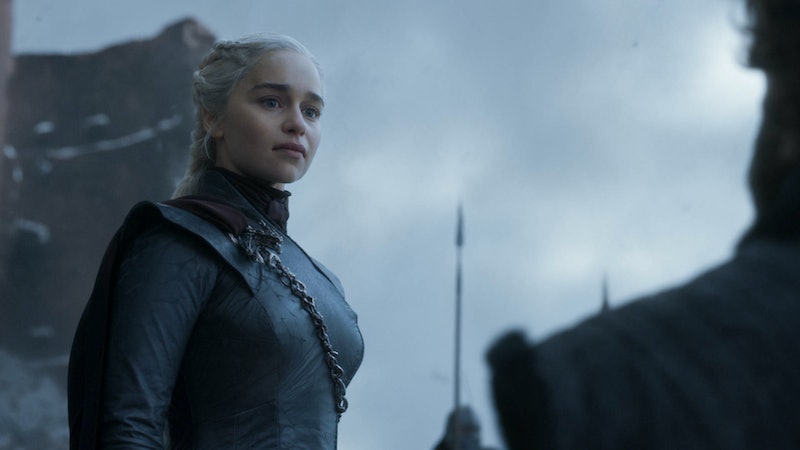 Spoilers ahead for the Game of Thrones series finale. For those that were left with more questions than answers after the final episode of Game Of Thrones, they might finally be in luck. Thanks to the Emmys, the HBO show's final ever script, written by showrunner D.B. Weiss and David Benioff, is now online for everyone to read. And it turns out, the GoT finale script clarifies Daenerys's last scene and confirms a few theories. Seriously, Reddit is going to have a lot of fun with this one.

The Game Of Thrones series finale, "The Iron Throne," is one of the 2019 Emmy-nominated best screenplays. This week, it was uploaded by the Academy, which means fans can get a closer read of the final episode. Let's just say, it's a fascinating read. Skip ahead to page 15 to pore over Dany's heartbreaking final scene. There are major clues hiding within the notes regarding whether it's ash or snow in the Throne Room.

Fans long debated what the white powder in Dany's House Of The Undying vision could be. Many believed it was snow, after all, winter was coming. But, after the Mother of Dragons torched King's Landing, it was safe to assume it was instead ash. Turns out, it was actually, drumroll please, snow.

The script states that when Dany enters the now destroyed Throne Room, it mirrors her vision. "The snow falls lightly through the collapsed roof as she steps past the pillars, down the central aisle," it reads. "Rubble from the fallen roof is visible on the floor, covered in a layer of snow."

But, that's not the only tidbit fans learn from this scene's script notes. After the episode, many on Twitter joked about Drogon destroying the Iron Throne. Specifically, they wondered how this dragon knew the symbolism behind this chair. Well, it seems he didn't.

On page 20, Weiss and Benioff explain that the throne was "not the target of Drogon’s wrath, just a dumb bystander caught up in the conflagration." Drogon was angry to see Khaleesi lose the fight, and according to the writers, "wants to burn the world but he will not kill Jon."

There's another reveal hiding in this script and it pertains to the moment when Drogon flies off with Dany's body. So many fans wondered where he was going and whether Khaleesi was really dead or not. The final notes of that scene help answer those questions once and for all. It reads:

"We follow Drogon over the ruined city with Dany's lifeless body clutched in his claw He heads out toward the eastern sky, flying over Blackwater Bay. It’s not a dusky beauty shot; it’s gray and lifeless, as befits a funeral. We fade to black."

It appears that Drogon was headed towards Dragonstone, which is east of King's Landing. But, more importantly, the first territory the Targaryens claimed in Westeros was the place where Dany was born. Now, it will be the place she will live after death.

Reading through the finale script, fun facts like this pop out, which makes it a worthwhile read for fans who aren't yet ready to say goodbye. After all, it might be awhile before anyone gets to read how George R.R. Martin ends the book series.