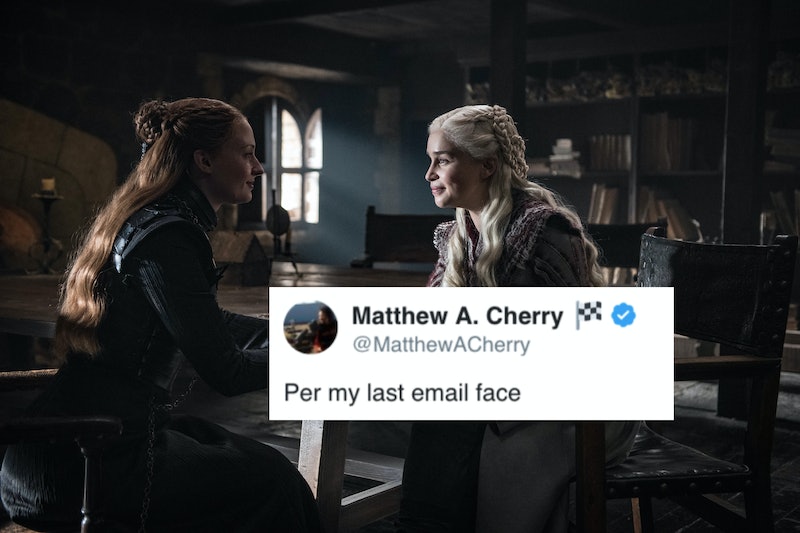 If you’ve been anywhere near your newsfeeds or water coolers or cousin’s ex-roommate’s HBO Now account, you may have noticed that season 8 of Game of Thrones has cometh. Along with the action and intrigue and dragons, the season 8 Game of Thrones memes have already begun. Have your screenshot-ing fingers at the ready because last week’s episode provided us with yet another reaction still for the ages: it’s Daenerys squinting passive-aggressively at Sansa, and it is a meme masterpiece. A meme-sterpiece, if you will. (You won’t? Cool, cool. I get it.)

If you like your memes with a side of context, I come bearing contextual gifts. In episode two of Game of Thrones’ final season, which aired Sunday, April 21 (I told you I would be provided the most contextual of context), Daenerys and Sansa had a heart-to-heart about the impending battle, who is telling who what to do in the Dany-Jon Snow relationship, and the future of the Iron Throne.

If you aren’t familiar with Game of Thrones and are just here for the memes: the Mother of Dragons (aka Khaleesi aka elaborate braid lady) and the character with red hair and violently perfect cheekbones (aka the actress who Joe Jonas’ is blessed enough to be engaged to aka the one who spilled the “hop hop hoppin” tea on Instagram Stories) had a chat. It included lots of frenemy-level stares, implied mmhmm yeah I’m SUREs and one forced squint-smile courtesy of actress Emilia Clarke.

Though last Sunday’s episode was filled with more eventful moments plot-wise (I will just leave this Arya-Gendry moment here), the internet was quick to spot one particularly savory expression given unto us by the Dragon Mother herself. Twitter user @reallyhalalfood tempted the internet with a screenshot of the tweet and the words “caption this.” 14K likes and over 2.3K responses later, a meme was born.

Many viewers noted the absurdity of Bran Stark as he was somehow everywhere in episode one of the season 8 premiere, giving knowing stares and zero fucks. Some have dubbed him the Meme King noting how well the final moments of the premiere episode work with the Curb Your Enthusiasm music. In some ways, Game of Thrones is a sitcom now and we must demand an era-appropriate laugh track.

Just as we do not yet know who will claim the Iron Throne come the series finale, we must not preemptively name people Kings and Queen of Memes just yet. There are so many people in the running, after all. Will sword throwing and sexually liberated Arya be declared Meme Ruler? Have we so soon forgotten Samwell Tarly’s poop montage of season 7? Will the Night King (AKA White Walker Supreme) be claim the Meme Throne? Only time and screenshots will tell.