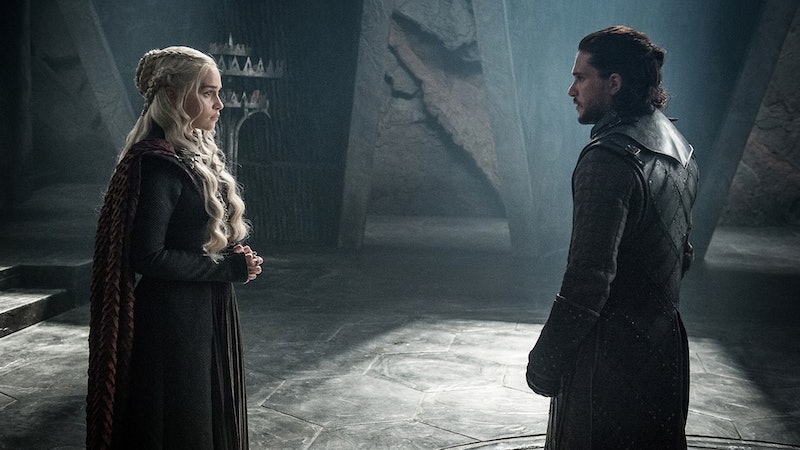 The fight for the Iron Throne is almost finished, but there's still a long battle to get through before the ruler of Westeros is decided. HBO released the episode runtimes for Season 8 of Game of Thrones, and any fans worried about the short premiere length should be thrilled to find out that there's plenty more of the fantasy epic to come in April.

On Friday, March 15, HBO announced the dates of the final six Game of Thrones episodes, along with the runtimes of each installment in a press release obtained by Bustle. And while the first two episodes — set to air on April 14 and April 21, respectively — are estimated to last just under an hour, according to Winter Is Coming, the final four episodes of the show will clock in at around 80 minutes each. In fact, April 28th's episode, the season's third, will officially become the longest episode in Thrones history, running an estimated one hour and twenty-two minutes. (Episode 4 will clock in at 1 hour and 18 minutes, and episodes 5 and 6 will both run an estimated 1 hour and 20 minutes.)

While the very secretive show hasn't revealed any details about the final six episodes, according to Uproxx, the third episode contains the "'most sustained action scene in pop culture history,'" which took an astounding 55 nights to film, before moving inside to a studio for several more weeks of shooting. Though the Game of Thrones cast and crew haven't yet confirmed that the battle will take place in that episode, Entertainment Weekly reported in November that there will be an entire episode of Season 8 that is "wall-to-wall action," like the famous "Battle of the Bastards" from Season 6.

"All the training in the world couldn’t have prepared me for the amount of stamina you needed for these night shoots," Maisie Williams told Vogue UK about the grueling fight, which takes place at Winterfell and involves multiple characters with individual storylines. "It gets to the point where it’s four o’clock in the morning and you’re looking around like, 'This is ridiculous. What are we doing?'"

Williams' costar, Kit Harington, has also spoken about the exhausting process of shooting that battle scene for over a month, telling GQ Australia back in January that the final season of the show "seemed to be designed to break us. Everyone was broken at the end. I don’t know if we were crying because we were sad it was ending or if we were crying because it was so f*cking tiring. We were sleep deprived."

As for the highly-anticipated finale episode, which will air on May 19 and have a runtime of 80 minutes, the show's creators, David Benioff and D.B. Weiss, have apparently been planning the final moments since 2012. Six years ago, they revealed to EW that when they originally pitched Game of Thrones to HBO, the pair proposed wrapping up the final season as three two-hour movies, in order to get the money they needed for the elaborate battles planned. “It’s what we’re working towards in a perfect world," Weiss said at the time. "We end up with an epic fantasy story but with the level of familiarity and investment in the characters that are normally impossible in a two-hour movie."

"We want to stop where we — the people working on it, and the people watching it — both wish it went a little bit longer," Benioff told EW in the same interview. "There’s the old adage of 'Always leave them wanting more,' but also things start to fall apart when you stop wanting to be there. You don’t want to f*ck it up."

According to the cast, Benioff and Weiss have achieved that goal; in January 2018, Isaac Hempstead-Wright, who plays Bram Stark, told The Hollywood Reporter, "We're all so confident in the way this story goes and the message it gives and how the whole story arc works." Noting that the finale "won't go the way some people want," Wright teased, "It will be too happy for some people, or too sad, or too whatever. That's the nature of an ending."

Fans' time in Westeros might be coming to an end this spring, but at least those who are hesitant to let go of the fantasy world will be able to take comfort in the final season's long episodes, and the promise of some truly unforgettable final developments.