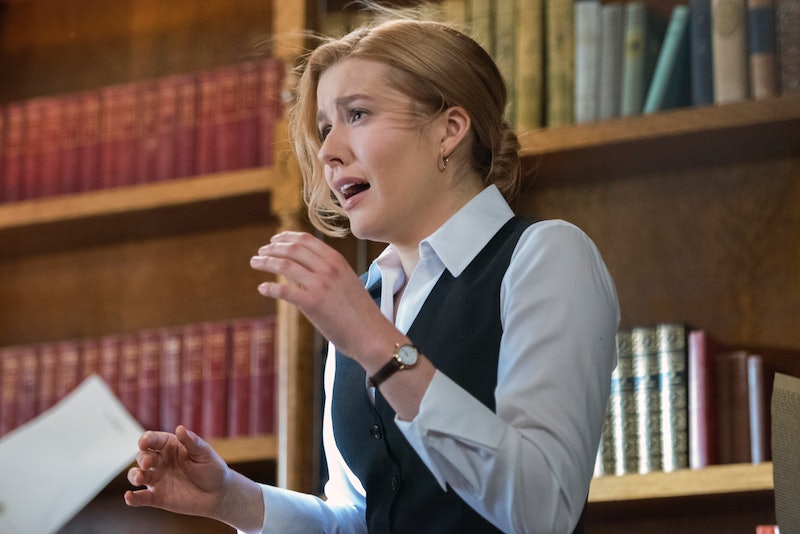 Spoilers ahead for Nancy Drew Season 1, Episode 4. Hello friends. We need to talk about something. There are actual, real ghosts on Nancy Drew, and we cannot ignore their presence any longer. Prior to the Oct. 30 episode, fans had witnessed Nancy and some other Horseshoe Bay residents seeing glimpses of a Dead Lucy ghost, but Wednesday's episode tripled down on the ghostly behavior. It's surprising for longtime Nancy Drew fans, if only because in the books, anything remotely supernatural was eventually explained by something based in, you know, science. But these are legit ghosts with a mission, it seems.

The many supernatural appearances didn't just happen because the episode aired right before Halloween either as having multiple ghosts was always this show's intention. Digital Spy reported that executive producers Melinda Hsu Taylor and Noga Landau said, "In our world, we'll have ghosts and each of them we encounter along the way is something that is grounded in the living. So, ghosts come back to haunt us because of crimes or murder or whatever it is that Nancy Drew has to solve."

At the same time, though, the show doesn't want ghosts to completely override all the storylines. Deadline reported that Hsu Taylor described the ghosts as more of "a condiment" to accompany the main meal of the show's plot. (Yum?) The duo added to Digital Spy that it's no coincidence who each ghost chooses to haunt. "The ghosts have their own mythology, you know, very specific how they operate in the world, why they are here, who they are haunting, their relationship to each other. That'll play out in arcs," they said.

Here are all the ghosts Nancy Drew has introduced so far (!), but more could be on their way. You never know what will happen next in Horseshoe Bay.

Lucy's death has gone unsolved for 20 years, which is likely why her spirit is still hanging around. She's had no closure. She's also the first ghost that viewers meet as she begins to haunt Nancy after Nancy finds what might be her bloody dress in her attic. Tiffany's husband Ryan Hudson also saw Dead Lucy in Nancy's house, but Nancy's father couldn't see her. Somehow Dead Lucy is connected to both Nancy and Ryan.

Nancy's connection to the ghost seems obvious — Dead Lucy wants Nancy to solver her murder. As for Ryan's connection? Maybe Dead Lucy was delivering a message to him from Tiffany, or maybe he's connected to her death somehow. Dead Lucy is one of the show's main mysteries, so it likely won't be solved soon. She'll just keep popping up to scare Nancy, Ryan, viewers, and who knows who else over the remaining episodes. Her jump scares are terrifying.

Tiffany's ghost only recently appeared in the Oct. 30 episode as her funeral day came. She was initially connected to Bess, because Bess had Tiffany's engagement ring. She even attacked Bess and sliced up her legs pretty good. So much for actor Maddison Jaizani saying that her character Bess "is all for it. She's happy to be haunted at any day."

However, Tiffany later rose up out of her grave (in creepy mist form) and hid out in George's backpack after George apologized graveside for sleeping with Tiffany's husband. At the end of the episode, Tiffany took possession of George's body, so you know that's gonna go well.

At the graveyard following Tiffany's burial, Nancy visited her mother's grace for the first time. In an emotional moment, Nancy revealed that she hadn't wanted to believe in ghosts because it upset her that Nancy's mom hadn't visited her in death. Nancy wanted to know why she wasn't enough for her mom's spirit to stick around. At that moment, a thick mist rolled into the graveyard that looked a lot like Tiffany's ghostly mist. It could have been Nancy's mom comforting her daughter, but it also could have been the other spirits in the graveyard comforting Nancy for her mother, whose own spirit may have already fully passed on.

Speaking of ghosts connected to George, Rita was seen in Episode 3. She came into The Claw looking for a job, and stuck around when she realized George was cursed. She helped put George in a salt circle for protection and everything. But that circle wasn't that protective and George was almost killed by a falling light until Nick saved her. Rita vanished after that, and George later found a newspaper clipping that noted Rita's death by decapitation... in 1975.

The ritual of kicking over a salt water bucket to see if it's been filled with blood and will mark your death in the coming year is absolutely bonkers, but here we are. George's bucket did have blood in it, and she's apparently cursed for a full year now. But who is cursing her? Is that different than being haunted? Is there a separate ghost who has cursed George? Who put the blood in her bucket? Why is any of this happening?

This show is nearly as bananas as the beloved Riverdale, which is a high goalpost to hit. Nancy Drew has fully leaned into the supernatural element and there's no turning back. Now viewers just have to watch, prepare for those Dead Lucy jump scares, and wonder which ghost is gonna show up next. We can't wait to see who it will be.