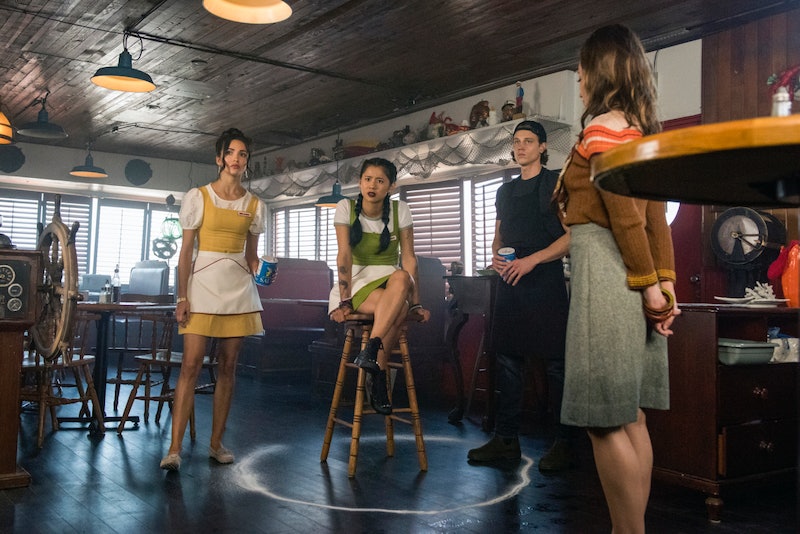 Spoilers ahead for Nancy Drew Season 1, Episode 3. In the previous episode of Nancy Drew, audiences learned about the Bucket Ritual, where the residents of Horseshoe Bay put buckets filled with seawater on their doorsteps and kick them over at midnight. If blood appears in the bucket, it foreshadows a death in the coming year. Which is why although she claims not to be superstitious, George (Leah Lewis) is understandably shaken from the blood that appeared in her bucket at the end of "The Secret of the Old Morgue," and her friends are equally nervous about her safety. Enter Rita on Nancy Drew, who is — by all accounts — a ghost who warns George that her skepticism may have a dangerous outcome.

"Locals tell tales about how the nor'easter blows restless spirits ashore," Ace (Alex Saxon) says ominously at the beginning of Episode 3. His anecdote foreshadows Rita (Zibby Allen), who later appears at The Claw to inquire after a job. She's only had one experience waitressing, which she tells Bess (Maddison Jaizani) was on roller skates. While audiences assume she used to work for one of those quirky, '50s-inspired diners, George's realization at the end of the episode colors this off-handed remark.

Throughout the episode, Rita begins acting stranger and stranger. After a decorative harpoon nearly falls on George, the newcomer suggests they surround her with salt. This town have already proved quite superstitious, so her suggestion isn't out of the ordinary. George, however, has no patience for it, telling Rita defensively, "You think I don't know superstitions and rituals and communing with the dead? My mother made salt circles around my high chair!"

The mysterious woman's candor then changes, signaling to audiences that she may know more than she's letting on. "Restless spirits want a life, and you've already been marked," Rita tells George. "Your friends have done the best they could to protect you, but the protection only works if you believe."

And just as suddenly as she entered The Claw, Rita leaves it — right as a lamp nearly falls on George and disrupts the line of salt. Not only does this essentially confirm that this bizarre woman is a ghost or somehow supernatural, but George's aforementioned discovery arrives courtesy of a newspaper clipping on the restaurant wall. "Tourist Decapitated in Boating Accident," the headline reads. Not only was the deceased named Rita Howell, but there's a picture of her alongside the article. The only problem? It was published on July 18, 1975.

At this point in the season, it's unclear whether Rita will return to Horseshoe Bay, or if she's simply meant to be a monster of the week. But then again, is she really a monster at all? She simply surrounded George with salt and warned her that she needed to believe in the supernatural, Perhaps she didn't wish Nancy and her friends ill and was simply a harmless, restless spirit blown to shore.

But one thing Rita's appearance (and disappearance) accomplished is reinforcing that both curses and ghosts are real within the show's universe. Granted, audiences have seen glimpses of a specter in the corner of the camera frame (likely Lucy Sable's ghost), but so far, there's been some confusion as to whether these visions should be taken of face value.

"If the show is going to change [from the books,] then it needs to actually be proven to exist rather than throwing these [special effects] at us and making us 'unsure,'" Reddit user Xekrin commented in the Nancy Drew subreddit. "[B]ecause so far (after second episode), I'm groaning every time they do a jump scare or whatever as I simply don't believe...they'd do it for real."

Indeed, Nancy Drew never dealt with the supernatural in the book series — there was always a rational explanation for each seemingly ghost-like mystery, similar to Scooby Doo. "The original books had a lot of hints of the supernatural, but it was always people in masks," co-executive producer, Noga Landau, said at SDCC, per Syfy. "We thought it would be cool to put actual ghosts into the show."

Rita's little speech to George about believing in ghosts appears to be directed at audiences, too. The protection that her friends provided would only work if she believed that both it and the protection were real — just like these supernatural elements will only be effective if audiences buy into the concept.

In other words, fans must start believing that Lucy Sable is really out there, haunting Horseshoe Bay. "I don't believe in ghosts," Nancy says in a promo for the series. "I believe in looking for the truth." However, the gumshoe may want to check her assumption, since those two things may be one in the same.

More like this
This 'Gossip Girl' Wardrobe Error Has Gone Viral On TikTok
By Alyssa Lapid
'The Last Of Us' Has Officially Been Renewed For Season 2
By Darshita Goyal
A New 'And Just Like That' Table Read Pic Confirms A Key Character's Return
By Jack Irvin and Grace Wehniainen
'Bridgerton's Regé-Jean Page Is The World’s Most Handsome Man
By Darshita Goyal
Get Even More From Bustle — Sign Up For The Newsletter
From hair trends to relationship advice, our daily newsletter has everything you need to sound like a person who’s on TikTok, even if you aren’t.