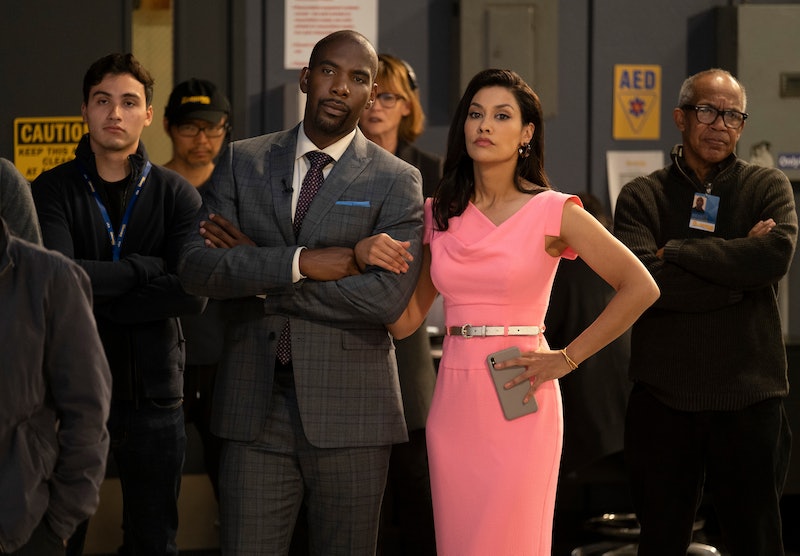 Spoilers ahead for Episodes 1-3 of The Morning Show Season 1. Daniel Henderson (Desean Terry) is not a fan of Gilmore Girls. In fact, he refers to it as "neo-pro life rights propaganda" and wonders, "What the hell kind of name is Lorelai?" And so, it's to his chagrin when he and his co-anchor, Alison (Janina Gavankar) are forced to watch the Gilmore Girls musical in The Morning Show's first episode.

It's meant as a fun, silly aside, but unlike Daniel, there are a lot of Gilmore Girls fans in real life who will be pleased to know such a musical isn't outside the realm of possibility. Similar musicals have previously been staged for movies like Mean Girls, School of Rock, SpongeBob Squarepants, and Bring It On. And since the beloved mother-daughter dramedy already received a Netflix revival (2016's A Year in the Life), it seems only natural for it to come to Broadway next.

Ironically, the 2016 Gilmore Girls revival itself contained a show about Rory and Lorelai's sleepy, New England hometown, titled Stars Hollow: The Musical. Mayor Taylor Doose (Michael Winters) commissioned it as a tourist attraction and invited some key townsfolk to a dress rehearsal so they could give feedback.

The production, to Lorelai's horror, was over-the-top awful, including a rap section à la Hamilton and some truly cringeworthy acting. Most viewers were equally nonplussed that it took up so much screen time, but there were a few that found it charming. So, there is at least some interest in something bigger.

"Even though it went on for awhile, I'm kind of a sucker for Stars Hollow: The Musical. It could be my deep and abiding Sutton Foster love," Gwen Ihnat wrote for The AV Club. "The songs started to grow on me after awhile. I think whether or not you enjoyed it depends on how much a theater nerd you are (guilty)."

Unfortunately, The Morning Show doesn't include any footage of its imaginary Gilmore musical (at least not in the first three episodes). But it's still fun to daydream about who they'd cast. Sutton Foster, who appeared in A Year In the Life's musical, could be Lorelai, and Rory could be played by either Anna Kendrick or Vanessa Hudgens. Patti LuPone would make a great Emily, and Jonathan Groff is a shoe-in for Logan, as is Darren Criss for Jess.

In fact, perhaps that's exactly who will end up on stage if Gilmore Girls does ever make it to Broadway. Composer Jeanine Tesori, who wrote the music for A Year In the Life's musical, is already up to the task. "I think Gilmore Girls: The Stage Musical is next," she told Variety, jokingly. "That's what I'm hoping. Fingers crossed." The Morning Show could be her opening.

More like this
Linda Ronstadt’s “Long Long Time” Plays A Pivotal Role In The Last Of Us
By Brad Witter
Taylor Swift Visited The 'Glee' Set For This Bizarre Season 5 Episode
By Grace Wehniainen
The 12 Most Controversial & Unexpected Grammy Moments Ever
By Jake Viswanath
Eurovision Has Been Given A Whole New Look Ahead Of Its Liverpool Debut
By Bustle UK
Get Even More From Bustle — Sign Up For The Newsletter
From hair trends to relationship advice, our daily newsletter has everything you need to sound like a person who’s on TikTok, even if you aren’t.