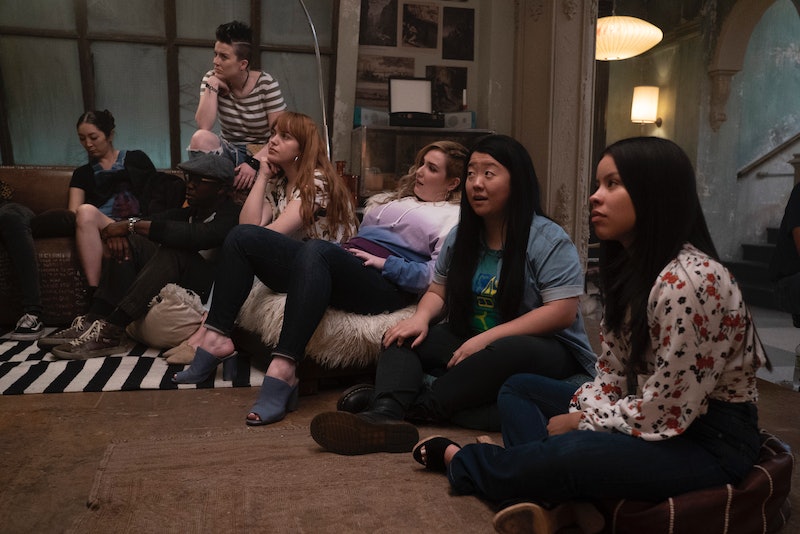 For a freshman show with a wide and varied cast, Good Trouble is doing well on the character development front. The show is barely more than a handful of episodes in, and yet, we're really getting a feel for just how all of these people from different walks of life and different stories ended up at the Coterie, ended up in this living situation that's more akin to a dorm than a grownup apartment. And Good Trouble's "Swipe Right" episode pushed things even further, giving everyone woman on the show a taste of something new and the power to leave something behind.

There are a handful of men living in the Coterie (hell-o, Gael, yes please), but "Swipe Right" is for the ladies, all of which are on each other's respective dating apps as a social experiment — they pick for the other women, and then they have to go on a date. And while some get duds and the others, well, get duds, this sort of sister-friend community is driving each member to be better without the explicit, in-your-face, "you should be making this decision" kind of direction. Telling a person what to do isn't so effective, but throwing them in a new situation? Well, it helps. Here's why everyone needed to swipe right this week.

For Mariana, this was less about the sex and more about the way it made her feel — she's spent so much time feeling terrible about herself and the way she's treated at Speckulate that interacting with people who truly adore her seemed to bolster her to fight the battles ahead. Mariana is great at putting herself out there, but she's losing herself in her day job. This encounter (even though it ended pretty awkwardly) helped her find her sassy side again.

To be fair, Callie didn't swipe right. Instead, she vowed not to see Gael all weekend so that she could study for the bar exam (it didn't work). Callie and Gael are both better with each other, and as Gael's relationship with Bryan comes with an ultimatum (Bryan wants Gael to choose), this would be a great point for Callie and Gael to just decide they want each other. For two people who don't want to play games, they are playing a whole lot of games, and this episode shows that they need to have a bigger talk in what they want to come next — good or bad.

Alice's middle name is "doormat," so it was lovely to see her making out with someone new... until Sumi, Alice's ex, came by to cry about being dumped and Alice kicked out her hookup. Oh, Alice! Of course Sumi ended up back together with her girlfriend, helping Alice realize that she was being taken advantage of.

It seems like just the mere smooching gave Alice some new confidence, because she called her hookup for a second chance and some more action. This is the strongest we've seen Alice yet — she's standing up for herself and her future by letting her past with Sumi leave. She knows that Sumi will not come back, and most importantly, Alice is no longer entertaining the idea that Sumi will.

Ugh, Davia is still dating a married high school classmate, sleeping with him only when he comes to Los Angeles. When he cancels on her (but really, he comes to L.A. and doesn't want to see her), she goes out with Paul, who seems like a dud... until he comments on her confidence and Davia takes it upon herself to help Paul with his.

Cue great sex and an afterglow selfie to make Davia feel a little better. Paul and Davia should definitely become a thing, because they can learn from each other — Davia to give herself to something fully, and Paul to get some danged confidence.

Malika is mad because a hot dude that she swiped right on actually swiped left on her... but when Isaac (played by Insecure's Sarunas Jackson) walks into the bar where she works, things change.

Malika spends a good time protecting herself but eventually, she lets this very handsome suitor in — if only because he makes a romantic gesture by remembering she liked Love & Basketball. It's all about the gesture, as she said, so maybe this means she'll be going for it more. Let's let people in!

The women of Good Trouble are doing it for themselves right now — good or bad, just one night of toying with an online dating app is opening big possibilities for the group. It's up to them now to do what they wish with the opportunities.