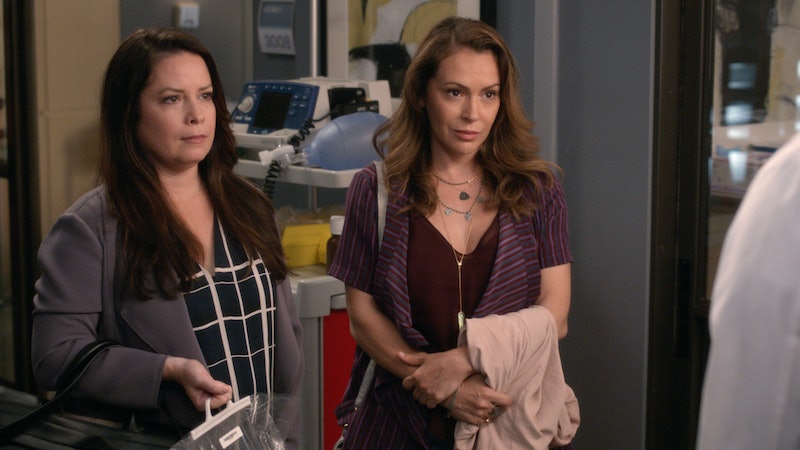 Spoilers ahead for Grey's Anatomy Season 16. ABC’s "Cast From The Past" week is bringing together former cast members of your old favorite shows from all different networks and depositing them right into your new favorite shows on ABC. Which is why there was a full on Charmed reunion on Grey’s Anatomy on Oct. 10, with Alyssa Milano and Holly Marie Combs reprising the roles of Piper and Phoebe. Well, kind of.

Instead of being the Halliwell sisters, here they are the Peterson family, called to Pacific Northwestern by Alex Karev and Richard Webber when their estranged sister, Heather Peterson, is put on life support after falling into a construction site and suffering massive brain damage. No, Heather was not played by Shannen Doherty nor Rose McGowan, who played the third Charmed sister and half-sister, respectively. That's likely due to scheduling or filming issues, although there's no confirmation that they were even asked. Bustle's request for comment from ABC about the reunion casting was not immediately returned. In any case, it worked out with just two of the reunited Charmed cast members.

This "new" sister named Heather was wrapped head to toe in bandages so neither viewers (or her sisters) could see her face, which turned out to be important to the plot twist at the end. Although they were playing somewhat new characters, Milano and Combs still had that same Charmed dynamic as they dealt with the news that they would have to pull their sister from life support. They bickered and fought — and were very into energy healing, a likely nod to their witchy Charmed ways — over what to do until Webber put them in their place and told them to get along, and do right by their sister.

But just as the sad music started to queue up, it turned out that the patient wasn't really their sister but a woman who had stolen their sister's wallet. It was a glimmer of light for the three sisters, as they now had a second chance to reconcile after years of estrangement, full of Webber's advice.

So why a Grey’s Anatomy reunion? According to Entertainment Weekly, though Milano and Combs are reuniting with each other onscreen on Grey’s, they’re also reuniting behind the scenes with Grey’s Anatomy showrunner Krista Vernoff and executive producer Andy Reaser, who both worked on Charmed.

Though not much was mentioned about Combs’ and Milano’s appearance on Grey’s Anatomy prior to the show’s airing, this Charmed reunion is different than the others on "Cast From The Past" week because Combs and Milano were essentially just playing themselves.

Don't get too excited about seeing your fave characters on your ABC shows all season — this is a one time thing only for now. Which means Karev and Webber have to figure out what to do with the the mysterious woman they killed by accident all on their own.

More like this
Patrick Dempsey Explained Why Playing McDreamy Was Frustrating
By Grace Wehniainen
Ellen Pompeo Says Goodbye To 'Grey’s Anatomy' In An Emotional Instagram Post
By Grace Wehniainen
Why Wasn't Teddi At The 'Bachelor In Paradise' Reunion?
By Brad Witter
'Love Island's Gemma & Luca Have Very Different Ideas About Their Break Up
By Frances Stewart and Sophie McEvoy
Get Even More From Bustle — Sign Up For The Newsletter