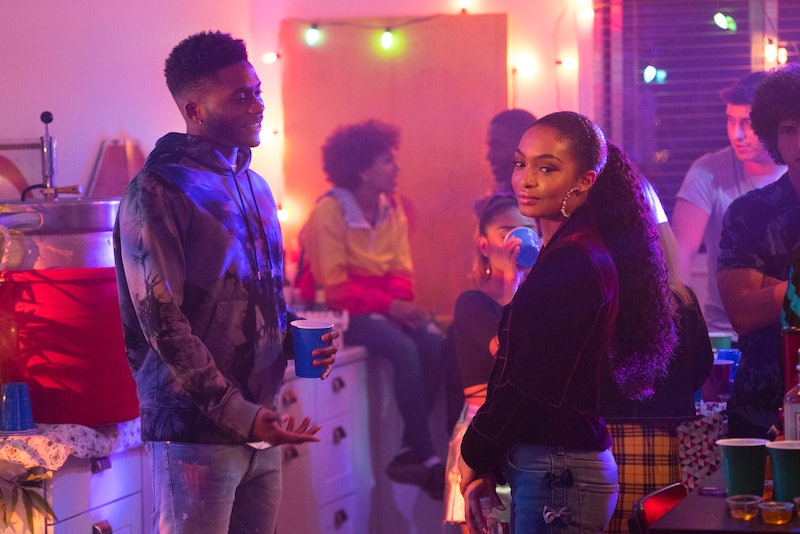 This week's episode of grown-ish is titled "Messy," and the descriptor couldn't be more accurate. The show is tackle the gray area surrounding enthusiastic consent this week, showing that things aren't always black-and-white. Thankfully, Grown-ish's consent conversation is honest, and it doesn't pretend to have all of the answers.

The setup for this week's installment of the Freeform series is a unique one. It's essentially a bottle episode, with the main characters spending the majority of the time sitting in a lounge, talking with one another. The conversation topic is a new Cal U policy that mandates students receive "enthusiastic sober consent" before engaging in sexual activity.

The policy comes into place after a young woman hooks up with Zoey's ex Cash at a party. She tells a friend that she was drunk when they got together, and rumors start to spread about the situation. The student clarifies to Cash that she did consent to being with him, despite being drunk at the time, but the incident sparks a bigger conversation about what consent should entail.

While Luka isn't thrilled about Zoey and Cash talking at the party, the group's discussion of the new policy quickly extends way beyond Cash's individual situation. Aaron, Vivek, Nomi, and Anna share stories of their own experiences, as well as their friends', and it's clear that there are a lot of misconceptions about consent and even assault.

Each of the students has a different perspective on the policy, but it's Vivek's story that stands out the most. He tells the group that one of his friends, Wade, was coerced into hooking up with two girls, even though he didn't want to. Unfortunately, the others' comments are hardly sympathetic after Vivek shares his friend's experience.

Vivek's story is met with jokes about how his friend should have liked hooking up with two women at the same time, and claims that men can't be victims of assault by women. Aaron says that Vivek is "out of his mind," and even Luka says that it's "ridiculous" to imagine a man being assaulted by a woman. Vivek proceeds to point out that reactions like these are why Wade felt pressured to go along with the ladies' advances in the first place.

Their conversation isn't perfect — and it shouldn't be. These are college students, most of whom are only in their sophomore year, talking about a topic that's new and confusing to them. Even taken separately, sex, sexuality, and even partying are confusing to them, so putting them together? It's going to be a lot to process. But the variety of perspectives shows how important it is to listen to young people when enacting consent policies like this one.

It's easy for legislators or college officials to have conversations like this in a vacuum. And on the surface, "enthusiastic sober consent" does sound like a good idea. As Zoey says, if the school's new policy stops even one instance of sexual assault, it's worth implementing. But listening to people about their experiences and how policies like this one play into their lives is vital, too. This week's grown-ish episode highlights how nuanced the topic truly is, and it might make viewers check their own biases, too.