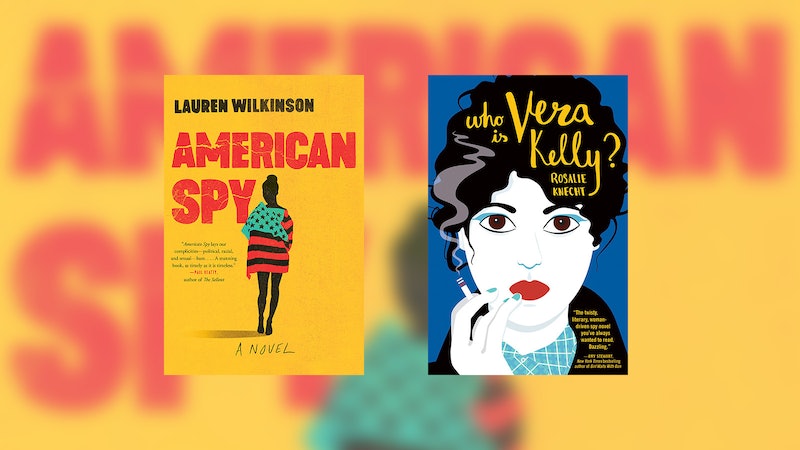 As a child, I devoured Nancy Drew novels, obsessed over Harriet the Spy, and rushed out to buy just about anything Ally Carter wrote about teenage girls living secret lives. When I grew older, I turned to adult fiction, and I was disappointed to find the library and bookstore shelves nearly empty of spy narratives centered on women. There were dozens and dozens of novels starring Jason Bourne, James Bond, George Smiley, and other white, straight men — but what happened to the female sleuths of my youth? Apparently, espionage is no job for a lady.

Or, at least, it wasn't. Two recent titles challenge the world of male-dominated spies: Who Is Vera Kelly? by Rosalie Knecht and American Spy by Lauren Wilkinson.

These heroines are unlike any spies I've read before: The titular heroine in Who Is Vera Kelly? is a young queer woman working undercover for the CIA. The book doesn’t only tell the story of her mission — to infiltrate a group of student activists in Buenos Aires, a task that requires artful deceit and the ability to mask one's true identity — but of her coming-of-age as a gay woman in the 1960s.

Although she may be the first literary sleuth of her kind, Vera’s creator doesn’t see her identity in conflict with what a spy should be. Rather, she counts it as one of her heroine’s motivating factors.

“In the end, it made sense to me that this would be part of the push that leads her to make all the sacrifices and take all the risks associated with being a spy — she already feels somewhat separate from a traditional view of what adult life is supposed to look like, and she understands the risks of being a queer woman enough to really value the idea of having her own money,” Rosalie Knecht tells Bustle. “As much of her own money as she can get her hands on. So the idea of this kind of covert activity starts to look pretty appealing.”

'Who Is Vera Kelly?' by Rosalie Knecht
Amazon

Like Vera Kelly, Marie Mitchell — the heroine of Lauren Wilkinson's American Spy — is a pioneering character who challenges the tropes of the traditional spy novel. Marie is a Black woman, and because of her race and her gender, she has spent most of her life trying to blend in. What could be better spy training than decades of learning to hide yourself in plain sight?

“In the end, it made sense to me that this would be part of the push that leads her to make all the sacrifices and take all the risks associated with being a spy..."

But it isn’t just Marie’s gender or race that separate her from the James Bonds of the world. It’s also her family. Her role as a sister, a daughter, and a mother are crucial to her work as an intelligence officer with the FBI. They influence nearly all of her decisions. In fact, American Spy is written as a letter from Marie to her young twin sons; the letter is her attempt to explain her life before they were born and the actions she takes to protect them after.

“Although I wrote many, MANY drafts of this novel, one of the few things that always stayed the same was the fact that I wanted to write a spy who had a complex emotional life. I wanted there to be obvious psychological motivations for her behavior even when (especially when) it was self-destructive,” Lauren Wilkinson tells Bustle. “And it seemed to me that her baggage would have to come from her relationship to her family because those are the people who pack our bags.”

If you come across a woman character in a spy novel, chances are they’re nothing like Marie or Vera. They’re victims, marks, femme fatales, or blatant sex objects offered up as proof that yes, the male hero of the story is very male. That is what makes the heroines in Who Is Vera Kelly? and American Spy so refreshing, and so satisfying. They have power, they have emotion, they have depth.

"I wanted there to be obvious psychological motivations for her behavior even when (especially when) it was self-destructive."

“It was really important to me to center a woman in a spy novel, and to give her as much dimension and agency as I could, because I’m just so tired of the tropes,” says Wilkinson. “I’m bored of them and I think it’s okay to admit to being bored!”

As a woman reader and genre-lover who has spent the last two decades reading about men uncovering government secrets, stopping violent coups, and saving the country from one foreign threat after another, I was gratified and overjoyed to see these women on the page. It made me wonder: What was it like to actually create them?

"I can’t say how exactly it felt to write her into existence," says Wilkinson. "But once the book went into production, and I had a little time to think about what I wanted its impact to be, I really hoped that her character and her unique perspective would resonate with people. And I’m grateful that it seems to have turned out that way for some readers."

“It was really important to me to center a woman in a spy novel, and to give her as much dimension and agency as I could, because I’m just so tired of the tropes."

According to Knecht, writing a character like Vera was just plain fun. "I got to do a little research about what women actually were doing in the intelligence services at that time, and of course they were there, although their roles were constrained, like you would expect," she says.

I did not expect to be quite so moved by Who Is Vera Kelly? and American Spy, but I was — as will, I expect, many readers who have been searching for pieces of themselves in their favorite genres. I just wish it had happened sooner — and so does Wilkinson.

"If writing a spy like Marie seemed so natural to me, and if she makes a lot of sense to you too," Wilkinson asks, "Then why has it taken so long for a spy story like this one to be told? And what does that say about the culture we live in?"

The answer to Wilkinson's questions are easy to answer but not easy to address, though one thing is clear: The world is ready for more female centric spy stories. Vera and Marie are only the beginning.