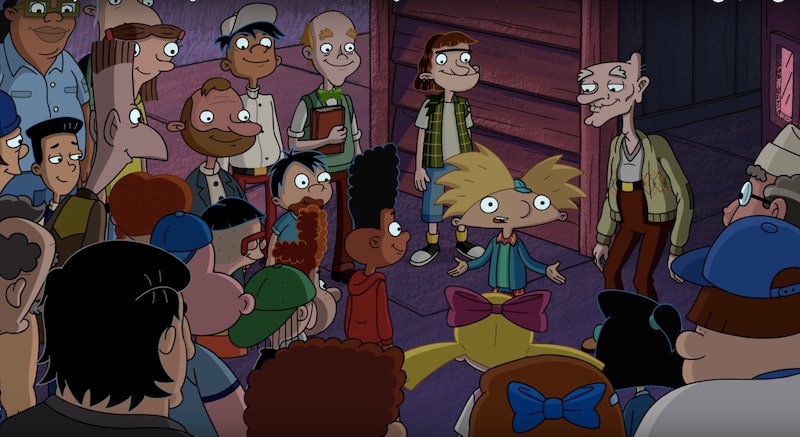 As the return of the beloved Nickelodeon cartoon looms near, new footage reveals that your favorite Hey Arnold characters are coming back. During Friday's San Diego Comic Con panel, snippets of the forthcoming Hey Arnold!: The Jungle Movie features the return of Arnold and his lovable pals. The reboot is set to make its debut on the network sometime this fall. In the clip, it appears that Arnold and the gang haven't missed a beat, picking right up were they left off when the show ended in 2004.

Among the characters returning for the revival Helga, Gerald, Phoebe, Stoop Kid, and Pigeon Man are all on board. The sneak peek also reveals that Helga has secretly filmed moments of Arnold throughout the entire series, as snippets of his life are played out onscreen for others in the community, who seemingly regard him as a hometown hero.

In this latest adventure, Entertainment Weekly reported that Arnold and his pals win a trip to the jungle in which Arnold seeks to solve the mystery of his missing parents. Series creator Craig Bartlett has returned as executive producer and also serves as a co-writer for the project.

During the Comic-Con panel, Bartlett also unveiled the jungle-clad personas of the integral characters for the film and also revealed that cast members Lane Toran, Jamil Walker Smith, and Francesca Marie Smith would all be returning to voice the main characters of the animated Nickelodeon movie.

Hey Arnold ran for five season on the network, premiering in 1996, and boasts 100 episodes. Fans are sure to be elated to finally get answers to some of unanswered questions regarding Arnold's life.