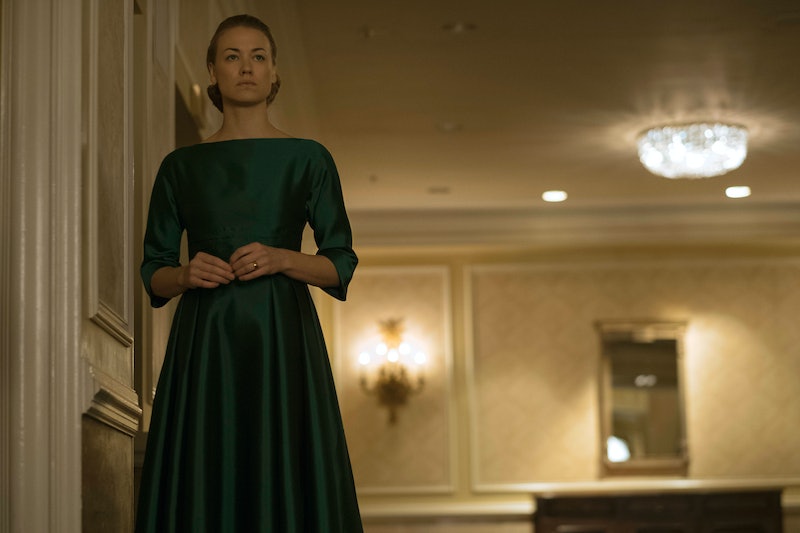 If you haven't read Margaret Atwood's novel The Handmaid's Tale, or read it long ago, the rules of Gilead may take a while to figure out. While it's nice as a narrative device that Offred's voiceover and the show's dialogue refers to aspects of their new society in vague terms, it is up to the audience to fill in the blanks. The hierarchy of women in The Handmaid's Tale, for example, is visually striking but not super clear in terms of how women are ranked in this dystopian society.

In Gilead, all women are subjugate to men irregardless of rank or status. Men are either Commanders (married leaders), Angels (soldiers), or ItGuardians (unmarried servants). Some other jobs exist for men, like doctor, and there is a secret police known as the Eyes of God. Modern society was overthrown by a group called the Sons of Jacob who imposed traditional Christian values on society to an alarming degree. Women have lost the right to vote, read, write, own property, make money, or hold any kind of position.

There are just a handful of roles that women are allowed to hold in Gilead, valued only by their perceived moral virtues and their ability to hold children. Since Gilead is a new society, it's unclear what happen to young girls before they come of age. From what we've sen so far, here's a breakdown.

High ranking "pure" women in Gilead are permitted to become wives. In the book they wear blue, representing the Virgin Mary. The Hulu series dresses the wives in blueish greens.

It's hard to tell exactly where Aunts rank, so I'm making an educated guess. Working class men answer to and fear these older and likely postmenopausal women, which is significant in this overly patriarchal society, but Aunts are working in service to wives by providing them handmaids. It's also possible that Aunts are permitted to read and write. I feel like a wife would have higher status, but that might depend on the situation and the wife's husband, of course. Aunts wear brown. It's unclear whether or not any Aunt is married — I think not. They strike me as similar to Catholic nuns. Aunts also run training facilities called, much to my own personal chagrin, "Rachel and Leah Centers" after two sisters in the Old Testament.

In the books, Aunts are named after household products used by women, like Sara Lee. That hasn't come up in the Hulu series, likely not to divert focus from their puritanical and conservative religious values.

The unmarried, infertile women in Gilead work as domestic servants and nannies to high ranking families. They wear green, darker on the Hulu series. They get to keep their names, just like wives. They can delegate tasks like shopping to handmaids and from what we've seen, tend to exert whatever power they can whenever they can.

The criteria for being a handmaid is oddly complex. They have to be fertile, but also considered morally impure or controversial in some way. They do not have names, taking instead the name of their Commander. Besides the ability to bare children, handmaids also have some kind of past that is considered scandalous by Gilead — whether they are homosexual "gender traitors," adulterers like June, sex workers, having had an abortion, or having been raped, for example.

We haven't met any econowives on the Hulu series yet, though I wonder if they might be the women dressed in grey, seen above. They are the wives of low ranking, poorer men and wear often tattered uniforms containing blue, red, and green stripes — because they fulfill the roles of wife, Martha, and handmaid in the home.

Finally, if a handmaid is convicted of a crime or unable to get pregnant after trying for a certain amount of time with a certain number of men, she is sent to the colonies and becomes an unwoman, the lowest status in Gilead. They aren't even considered true citizens at that point. In the books, the colonies are parts of the country that have been destroyed by radioactive waste, and those sent there are tasked with cleaning up said waste until they die.

There is another option for "illegitimate" women called Jezebel's, a location that also hasn't been mentioned on the Hulu series yet. It's also possible that some women are informants and spies for the Eyes. However, that about covers it as far as jobs and duties go. The hierarchy for women in The Handmaid's Tale isn't super linear, but everyone has an assigned place based on some very backwards values that are horrifying to a modern audience.