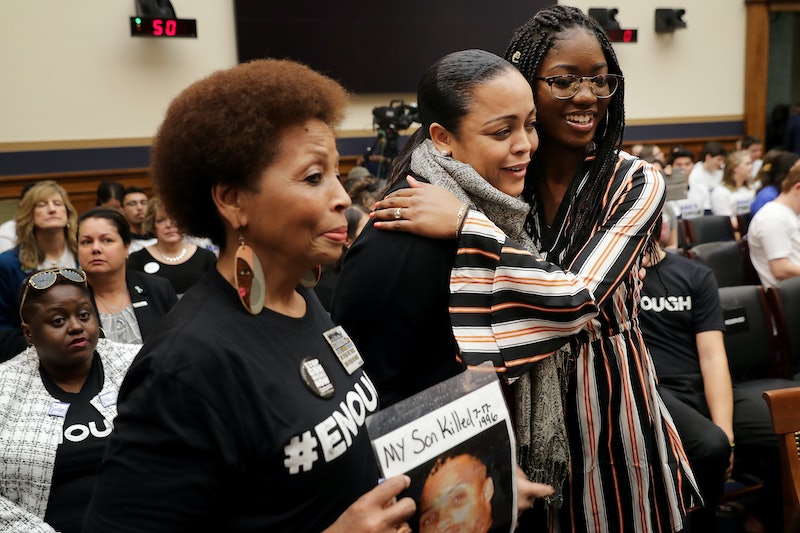 On Wednesday — just one week before the anniversary of last year's Parkland, Florida, school shooting — the House held its first gun violence hearing since 2011. In the eight years since the chamber's last hearing, dozens of mass shootings have taken place across the country, killing hundreds of people. But now that Democrats have retaken the House, they made it clear at Wednesday's hearing that gun violence prevention is one of their top priorities.

According to Politico, the hearing — which was facilitated by the House Judiciary Committee — lasted for nearly four hours. During that time, Democrats advocated for a ban on assault weapons, stricter background checks, and other gun violence prevention tactics. The room was filled with anti-gun violence advocates, mass shooting survivors, and people who had lost family members, friends, or classmates to gun violence, Politico reported.

During the 2018 midterm elections, Democrats were able to regain control of the House — in part due to fundraising efforts by gun control advocates, per Axios. These efforts have also been translated into policy, Axios reported, with a group of House Democrats and Republicans lending their support to a bill that would mandate universal background checks for any purchases of guns.

As Mother Jones pointed out, the hearing was not without controversy. At one moment, Joyce Lee Malcolm — a law professor and gun rights expert — argued that teachers at Marjory Stoneman Douglas High School had decided that arming themselves would be the best way to protect their students. Florida Rep. Ted Deutch, a Democrat who represents Parkland, quickly chimed in, noting that the school had not actually made such a decision.

“When you go more than eight years without a single hearing despite the regular slaughter of Americans all across the country, it’s important that when the debate finally starts that there’s honesty in it,” Deutch told Mother Jones following the hearing.

In another heated moment, one of Deutch's guests — Manuel Oliver, whose son Joaquin "Guac" Oliver, was killed in Parkland — responded with outrage when Florida Rep. Matt Gaetz suggested that building a border wall would help eliminate gun violence. Gaetz, a Republican, did not mention that the Parkland shooter had actually been born in Florida. When Gaetz made this argument, Oliver interrupted him, saying "that's not true." Following a back-and-forth, Gaetz asked for Oliver to be removed; although chairman Rep. Jerrold Nadler gave Oliver a warning, he did not ask him to leave.

Politico noted that the GOP-led Senate is unlikely to embrace increasingly restrictive gun control measures. Despite this obstacle, however, Democrats like California Rep. Eric Swalwell said they felt a "renewed sense of hope" after the hearing — especially because it had been designed as a space for gun violence prevention experts and activists to talk to lawmakers for the first time in years, per Mother Jones. Background checks are certainly a major priority for Democrats, but so too was having a chance to hear from their constituents who had been impacted by gun violence firsthand.