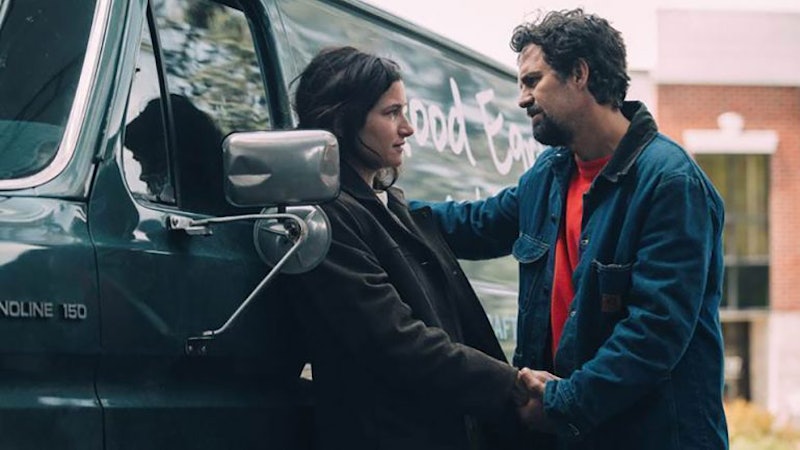 More than 20 years after its release, Wally Lamb's I Know This Much Is True is finally headed to a screen near you. HBO's miniseries adaptation of the 1998 novel is out now, with Mark Ruffalo playing the dual roles of identical twins. If you're already wondering about the I Know This Much Is True book ending, here's your guide to what went down. Major spoilers ahead.

Much like Lamb's first novel, She's Come Undone, I Know This Much Is True became an Oprah's Book Club pick shortly after its release. The book centers on Dominick, a man who makes it his mission to free his identical twin brother, Thomas, from an abusive psychiatric hospital. Dominick's attempts to rescue Thomas, who has been diagnosed with paranoid schizophrenia, give him something to focus on in the wake of his daughter's death and his subsequent divorce from his wife, who left him after learning that he had a vasectomy without consulting her.

Dominick's troubles aren't over when he finally gets Thomas out of the hospital, however. His brother dies by what may be suicide, leaving Dominick distraught. Following Thomas' death, Dominick learns that his own girlfriend has been having an incestuous affair with her half-uncle, from whom she has contracted HIV. She's also pregnant, and she wants him to adopt her child in the event of her death. Dominick falls back in love with his ex-wife, whom he remarries, and the two ultimately adopt his late lover's baby after she dies.

The I Know This Much Is True miniseries stars Mark Ruffalo (Avengers: Endgame) as Dominick and Thomas in the present day, with Philip Ettinger (One Dollar) portraying the brothers in flashbacks. Kathryn Hahn (Mrs. Fletcher) plays Dessa, Dominick's ex-wife, and Imogen Poots (Roadies) plays Joy, his lover.

More like this
Netflix Shut Down 'Bridgerton' S3 Rumours About A “Very Dark” Storyline
By Bustle
Jessica Simpson On The Time She Was Pursued By A Backstreet Boy & An *NSYNC Member
By The Editors
We’ve Entered The Hot Boy Reader Era
By Samantha Leach
'Wednesday' Star Emma Myers Thinks A Wenclair Storyline Is “Possible” In Season 2
By Alyssa Lapid
Get Even More From Bustle — Sign Up For The Newsletter
From hair trends to relationship advice, our daily newsletter has everything you need to sound like a person who’s on TikTok, even if you aren’t.