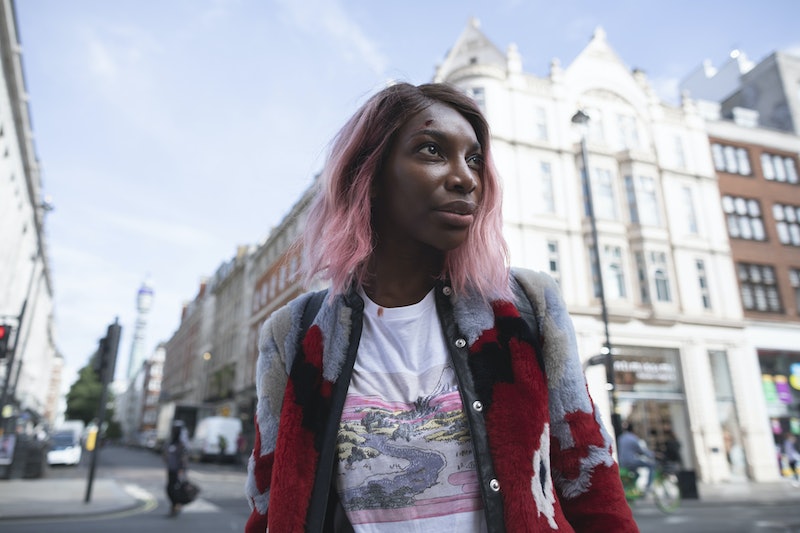 HBO’s I May Destroy You is an incisive look at surviving a drug-facilitated sexual assault in a London club. As the premiere episode ends, Arabella, played by showrunner Michaela Coel, sifts through her dampened memories of the night before — the last-minute decision to go out, the shots someone bought for the table, the company she was keeping — in a blur that feels unique to modern life. I May Destroy You's soundtrack is aggressively current; the closest thing we hear to a throwback is Arabella and her friends madly rushing to the dance floor when “Flowers” hits. It makes sense: Arabella is a writer whose literary career launched on Twitter; her fans ask for selfies, not signed copies of her manuscript. Her story is about the chaotic, propulsive present, and the music of I May Destroy You keeps you locked in the right now. Here's a rundown of the songs featured in Episode 1.

"Only Child" by Tierra Whack

Whack’s “Only Child” plays in the background as Arabella replays her trip to Italy, including al fresco breakfasts with the dreamy Italian guy who doesn’t want to be her boyfriend.

"OMG" by Sampa The Great

"OMG" is part of the medley of songs that plays as Arabella struggles to finish the follow up to her debut novel, lyrics tumbling forth more nimbly than her own words.

"Pull Up" by Abra

Another, woozier track to write — or not write — to. The mood changes as Arabella’s writer’s block extends into the night; “How to write quickly,” she googles.

This track from British MC Paigey Cakey sets the rhythm for the East London night that’s happening without Arabella as she sits punishingly in her office.

Finally, a moment of triumph for Arabella as she knocks out a karaoke rendition of "Truffle Butter."

The kind of song that brings everyone back to the dance floor, even as the night threatens to end.

A rendition of gospel legend Milton Brown’s “It’s Gonna Rain” plays as the night turns sour. The excited glee of being young and out and having fun feels threatening with Arabella stumbling and the choir singing “it's gonna rain, rain down fire.”

More like this
Linda Ronstadt’s “Long Long Time” Plays A Pivotal Role In The Last Of Us
By Brad Witter
Hilary Duff's Husband Matthew Koma Has Her Name Tattooed On His Butt
By Jake Viswanath and Stephanie Downs
Austin Butler Recalls Lisa Marie Presley Showing Him Elvis’ Bedroom
By Jake Viswanath
You’ll Definitely Recognise Isadóra Bjarkardóttir Barney’s Mum
By Maxine Harrison
Get Even More From Bustle — Sign Up For The Newsletter
From hair trends to relationship advice, our daily newsletter has everything you need to sound like a person who’s on TikTok, even if you aren’t.