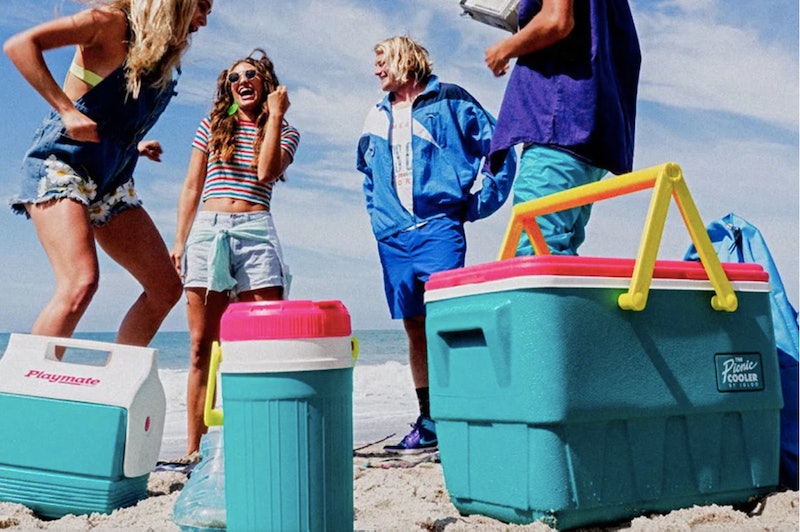 It doesn't get more '90s than this. You know when you see something that you didn't even know you missed — until you lay your eyes on it one more time? Well, get ready for that unexpected, swift kick of nostalgia. The Igloo Coolers Throwback Collection is here to make you miss the '90s and go straight into a retro tail-spin. Those famous teal swivel coolers probably accompanied you to the ocean or to the lake — or maybe just lived in the back of your parent's car. But something about the color, the model, and the feel will take you all the way back to the '90s — to 1992, in fact.

"Igloo is throwing it back with a special capsule that is all that and a bag of chips," the company explained on its website. "Originally released in 1992, three key products are featured with a bright color palette that are sure to make you want to break out the Aquanet and dust off your DayGlo! Today, we brought them back with the same colors, built on the same machines, in the same factory in the USA!" I don't know if I'm going to pull out my DayGlo anytime soon, but the Igloo Throwback Collection does have me thinking of sandy sandwiches and a simpler time.

The collection consists of three products, each of which is sure to send a lightning bolt of nostalgia your way. And when they say the products are exactly what they were in the '90s, they're not kidding. They look hauntingly familiar. There's the Retro Playmate Mini — complete with the swivel action you remember, the Retro Picnic Basket, and, for the thirsty among you, the Retro Half Gallon Jug.

The Retro Playmate Mini is probably the most iconic of the three. That swivel top is a dead giveaway of its '90s credentials and, with its four-quart capacity, it was a popular choice for mini-outings.

The Retro Picnic Basket ain't cheap — in fact, it comes in at just under 70 bucks. But this 25-quart cooler is a whopper and, according to the company, it's big enough to keep you satisfied on a whole day's worth of adventures.

Finally, something about the Retro Half Gallon Jug is the most '90s. Maybe it's that it reminds me of childhood soccer games or beach volleyball, but something about drinking water out of an almost comically big container covered in bright colors just screams 1990s.

There are a lot of ways you can touch base with your '90s heritage. You can float around in some pink inflatable furniture, eat some slime-flavored ice cream, or speak only in '90s slang (Duh!). Why wouldn't you? It was a time before you were drowning student loan debt and trying to keep up with Gen Z celebrity names and dodging Game of Thrones spoilers even though your roommate won't stop hinting at things no matter how many times you ask.

Seriously, the '90s were a neon-colored, Nickelodeon-filled dream. So if you really want to remember those good ol' days, then this Throwback Collection definitely has some serious '90s vibes. Word.