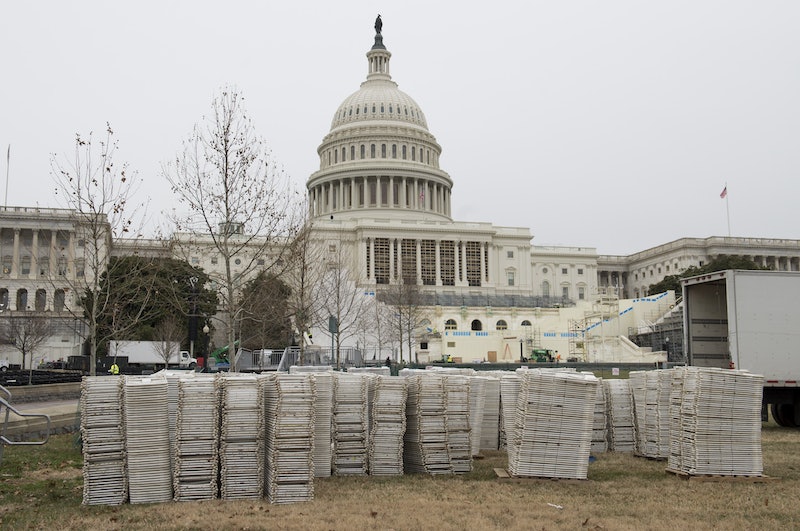 Next Friday, January 20, Donald Trump will officially become president. His inauguration team has released a schedule of the 2017 inauguration, consisting of a number of events spread across three days. Thousands of people will descend on Washington next week to celebrate the newly-minted President Trump, in a parade, welcome concert, and a number of balls and galas. However, large numbers are also expected to come to Washington to protest Trump and his administration; as many as 100,000 protesters are projected to attend the Women’s March on Washington alone.

The calendar of events for the inauguration begins on Thursday, January 19, and ends the following Saturday. The Inaugural Committee has given the schedule as follows:

Trump and Pence will both attend to honor U.S. veterans.

Trump and Pence are both slated to appear, though it is not yet clear who will be performing at the concert.

The Mormon Tabernacle Choir and 16-year-old Jackie Evancho will perform. You can see a map of the seating here.

Participants in the parade, which will include the Rockettes, will follow a route from the U.S. Capitol Building to the White House. The Inaugural Committee has estimated that the parade will last between 60 and 90 minutes.

Trump is slated to attend three official inaugural balls, two in the Convention center, and one to honor members of the armed services at the National Building Museum. There will also be a number of unofficial balls and galas on inauguration night, though it is not clear that Trump will be attending them.

Washington National Cathedral, 10 am — 11 am ET

This event will be an “interfaith prayer service,” according to the Inaugural Committee.

If you are more interested in protesting Trump’s inauguration than celebrating it, there will also be many protest events held in Washington D.C. and around the country throughout the inauguration calendar. The Women’s March on Washington, in which upwards of 200,000 people are expected to gather in support of women’s rights, will be held on Sunday, January 21. It will start at 10 am ET, meeting at the intersection of Independence Avenue and Third Street, S.W., and go until 5 pm. If you’re not in Washington, you may still be able to attend one of the protest’s sister marches. Right now, there are 269 marches being planned in cities all over the United States and in more than 25 countries. You can find out more about sister marches of the Women’s March on Washington here.

On January 20, the ANSWER Coalition will be holding a protest at the Freedom Plaza at 7 am, to demonstrate against “war, militarism, racism, anti-immigrant scapegoating and neoliberal capitalism’s assault against workers’ living standards and the environment,” according to the group’s website. So far, eleven thousand people have pledged to attend on Facebook.

In L.A., thousands of protesters will gather at 11 am on January 20 for the #UnitedAgainstHate Anti-Trump March; in Seattle, 4,000 people have said they’ll attend Resist Trump: Occupy Inauguration on Inauguration Day; in Chicago, more than 7,000 have pledged to attend a protest at Trump Tower; and in San Francisco, an event called “Bridge Together Golden Gate” will attempt to create a human chain across the Gold Gate Bridge, to “stand together in unity and love as a shining beacon of inclusiveness and democracy” on Inauguration Day.

More like this
Craving The Beach? Here's Your Guide To A Solo Vacation In Turks & Caicos
By Alexis Morillo
Chris Kaba's Family Continue Fight For Justice After Viewing Police Bodycam Footage
By Sophie McEvoy
Women Around The World Are Cutting Their Hair In Solidarity With Mahsa Amini
By Darshita Goyal
New Coins Unveiled As King Charles III's Reign Gets Underway
By Sam Ramsden
Get Even More From Bustle — Sign Up For The Newsletter