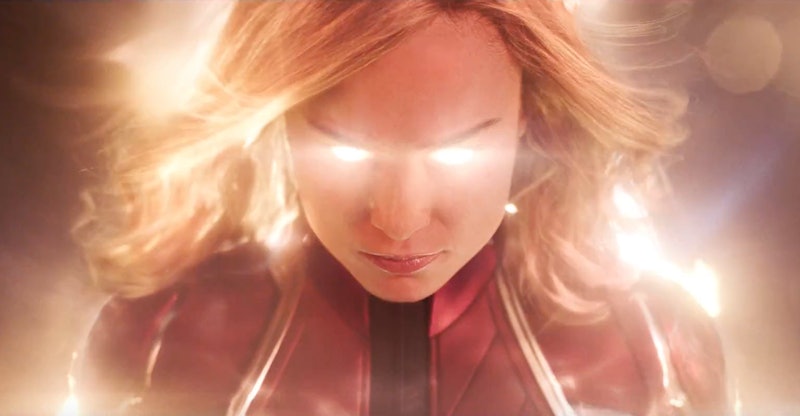 Sept. 18 started off as a normal Tuesday, until you checked your Twitter or maybe even your texts and found out that the first trailer for Captain Marvel came out during the wee hours of the morning. The new trailer has so much to unpack given that Brie Larson's superhero has a complex origin story — as she says in the trailer, "It's hard to explain." As exciting as the new information about Marvel's first female superhero to get a standalone movie is, the Infinity War clues in the Captain Marvel trailer might just be the most exciting aspect of the new video.

The first biggest clue as to as connection between Infinity War and Captain Marvel is, of course, a shot of the superhero's beeper, which you saw Nick Fury (Samuel L. Jackson) page in a post-credits scene of the latest Avengers movie. Remember when Nick Fury pulled out his beeper to send one last page before he evaporated to dust like half the earth's population? That final "hail Mary" move sent a signal to Captain Marvel, as indicated by the part-alien superhero's symbol which flashed on the beeper's screen.

While most probably figured that Nick Fury's distress page meant that Captain Marvel is the Avengers' only hope in defeating Thanos in Avengers 4, the new Captain Marvel trailer basically confirms that Brie Larson's badass superhero will save the day.

The beeper probably was the biggest clue as to Captain Marvel's connection to Infinity War, but another familiar face, Agent Coulson (Clark Gregg) also hinted at a big Avengers connection. As Marvel Cinematic Universe fans know, Coulson and Fury spearheaded the Avengers Initiative together, before the former went on to become the director of S.H.I.E.L.D.

Captain Marvel will probably play an integral role in picking up the pieces in the wake of Thanos' destruction, and fans have noted that the big bad should definitely be worried. Aside from the appearances of Nick Fury and Agent Coulson, Brie Larson's superhero looks incredibly powerful in the trailer. The trailer's end shot with Captain Marvel, aka Carol Danvers, revealing her energy-wielding hands and glowing eyes will leave anyone — even Thanos — in awe of her power.

One of the most exciting aspects of Captain Marvel is that it takes place in the '90s. Not only are viewers treated to shots of relics from two decades ago like the Blockbuster that Captain Marvel crashes into when she falls from the sky in the trailer, but Captain Marvel gives viewers a chance to learn more about Coulson and Fury's pasts.

Above everything else, Captain Marvel will introduce the world to the superhero who very well could be the world's only hope for undoing the damage that Thanos' collecting of all the Infinity Stones did. As the trailer shows, Captain Marvel gave Nick Fury hope after he'd lost it back in the '90s, so she could be the Avengers' hope now, too.